The Black Sea is a large inland sea situated at the southeastern extremity of Europe. It is one of the most famous inland seas in the world and is bordered by Ukraine, Russia, Georgia, Turkey, Bulgaria and Romania.

The geographical aspects, facts and Black Sea countries constitute an important part of the UPSC Syllabus and candidates preparing for the upcoming civil services exam must refer to the information discussed further below.

Also, refer to the links given below and complement your IAS Exam preparation: 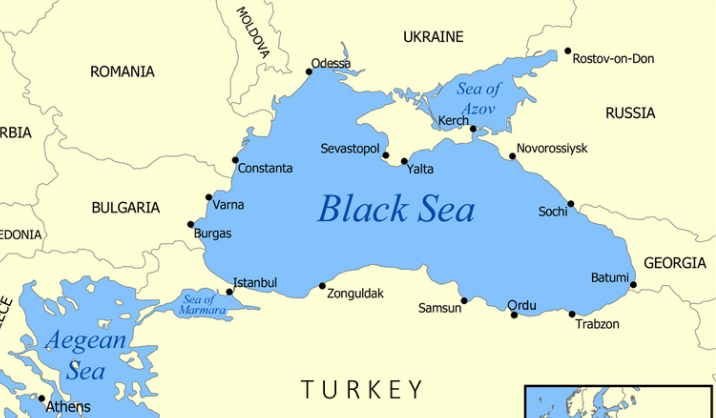 Given below are other important facts and geographical features of the Black Sea:

Consequences of Environmental Changes on the Black Sea

The Black Sea had a very stable ecosystem, until the last few decades when the human economic and social activities have severely resulted in the degradation of the seawater and ecosystem. The environmental and climatic degradation has led to:

Aspirants looking forward to applying for the upcoming IAS Exam can refer to the UPSC FAQ page and get answers to all their queries about the civil services recruitment and selection process.

To get the latest information about the upcoming government exams, study material for preparation and tips to excel in the examination, candidates can turn to BYJU’S for assistance.

Ans. Many ancient theories are believed for the naming of the Black Sea. It is believed that various savage tribes lived on the shores of the sea, which made it inhospitable. Another theory says that sailors and pirates gave the name as they were struck by its dark appearance under stormy skies. Also, because the water is anoxic in nature, decomposition is tougher in the lower layers of the sea. This is another reason which made scary rumours emerge about the sea and later resulted in naming it the same. However, no clear reason is still available.

Q 2. Is their marine livelihood in the Black Sea?

Ans. Yes, the sea is extremely rich in flora and fauna and various species of plants and animals can be found underwater in the seabed.