The Delhi Regional Security Dialogue was held in November 2021 hosted by India and participated by seven other nations wherein the situation in Afghanistan was discussed. The participating countries adopted the Delhi Declaration at the end of the dialogue.

This is a significant development with respect to India’s foreign policy and is hence is an important topic for the UPSC exam. In this article, you can read all about the Delhi Declaration on Afghanistan and the Delhi Regional Security Dialogue. 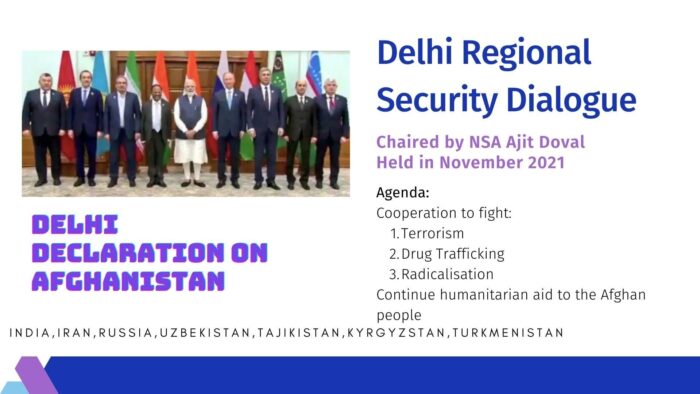 Why was Afghanistan not invited?

Why is India hosting the dialogue focussed on Afghanistan?

The eight participating nations adopted the Delhi Declaration as an outcome of the security dialogue. The NSAs/security heads:

Surprisingly, the Taliban has responded positively to the Delhi Declaration on Afghanistan. The Taliban spokesperson said that it agrees with all that was said in the NSA-level meeting in Delhi. This is significant because despite Pakistan and China declining to attend the event, and despite Pakistan’s negative attitude towards India’s role in Afghanistan, the Taliban seem to be more welcoming of India’s moves.

Earlier, the Taliban had said that it appreciated everything India had done for Afghanistan such as developmental and infrastructure projects.

The fact that the Taliban, despite their historical animosity towards India, has supported the security dialogue, shows that there is back-channel communication happening between India and the Taliban.