In January 2021, Oxfam International released the Inequality Virus Report focussing on the impact of the COVID pandemic on economic inequality across the world.

The global survey was conducted for 295 economists from 79 countries and showcases how the elite became wealthier, while the ones already in poverty fell deeper into economic crisis.

In this article, we shall discuss at length the outcomes of the Inequality Virus Report and the impact of the virus on the rich and poor. This is an important topic from the IAS Exam perspective for both prelims and mains.

The report was released after a thorough survey was done comparing the pre and post-pandemic situation of the rich and the poor. The following conclusions were drawn by Oxfam based on the survey:

Inequality Crisis in the World

The image given below shows the main findings from Oxfam’s survey of economists on the impact of the Coronavirus pandemic on inequality: 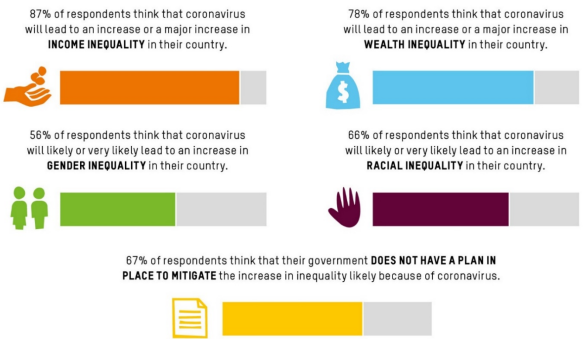 Coronavirus has exposed the worst effects of poorly equipped, poorly funded public health systems, and the failure of private systems based on how rich you are, when faced with a crisis such as this.

Visit the linked article to read more about Income Inequality in India and prepare for the upcoming IAS exam.

Discussed below is India’s status as per Oxfam’s survey based on the Inequality Virus Report. Given below are the key observations based on the report with regard to India:

Read about the National Health Mission launched by the Government of India with the objective of addressing India’s malnutrition crisis at the linked article.

Educational Inequalities in India as per the Report

Health Inequalities in India as per the Report

Livelihood Inequalities in India as per the Report

The pandemic has shaken the world to its very core. It has exposed the fault lines in our societies and economies but has also paved a way for transformative policies for a just and equal world.

Discussed below are the steps which can be taken by the concerned authorities to build the social and economic inequalities already existing in the country and have taken an additional toll after the pandemic.

Candidates can get the detailed UPSC Syllabus for the upcoming Civil Services Exam at the linked article.