Difference between Statutory and Quasi-Judicial Bodies

Difference between Statutory and Quasi-Judicial bodies is explained here in detail. This topic is important from the perspective of Indian Polity Syllabus. Statutory Bodies are called ‘statutory’ since statutes are laws made by the Parliament or the legislature. A quasi-judicial body can be an individual or body with powers resembling a court of law. The difference between Statutory vs Quasi Judicial Bodies given here can help the UPSC Civil Service exam aspirants to understand the basics better and know their comparisons thoroughly. 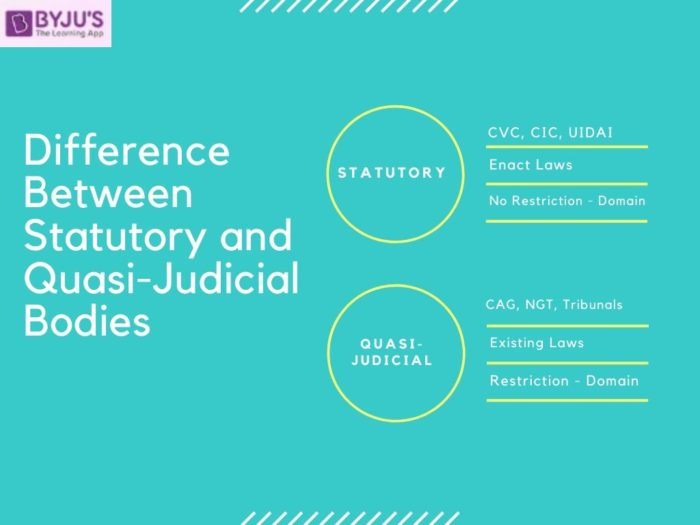 The major difference between Statutory and Quasi-Judicial Bodies are:

Is RBI a statutory body?

What is an autonomous body in India?

Autonomous Bodies are set up whenever it is felt that certain functions need to be discharged outside the governmental set up with some amount of independence and flexibility without day-to-day interference of the Governmental machinery.

What is the constitutional body and statutory body?

Statutory bodies are established by an act of parliament whereas constitutional bodies are mentioned in the constitution and derive their powers from it.

Is UPSC a constitutional body?

Article 315 of the Indian Constitution deals with Public Service Commissions for the Union and for the States. The UPSC is a constitutional body. The UPSC comprises of a chairman and other members appointed by the president.

Is UGC a constitutional body?

The University Grants Commission of India (UGC India) is a statutory body set up by the Government of India in accordance to the UGC Act 1956 under Ministry of Education, and is charged with coordination, determination and maintenance of standards of higher education.