Mains: Significance of strengthening bilateral ties with the Nordic countries for India.

The Prime Minister of India attended a series of bilateral talks with his counterparts from various European countries.

Significance of the meeting

To know about the significance of Denmark to India, refer to the following article:

Nut Graf
Post the Cold War, India has managed to build stronger ties with both the West and Russia, but that era of multi-directional partnerships is facing its strongest test with the invasion of Ukraine by Russia and the major challenge before India is to build a stronger strategic future with the West without disrupting its crucial traditional strategic partnership with Russia.

1. President has no role to play in Perarivalan’s plea, says SC

Prelims: Pardoning powers of the President and the Governors

Mains: Details of the Supreme Court’s Judgement in the A G Perarivalan case.

The Supreme Court held that the Tamil Nadu Governor is bound by the state legislature’s decision on the release of A G Perarivalan.

For a detailed background of the issue refer to the following article:

Read more about the Pardoning Powers of the President.

Nut Graf
Acknowledging that the President and Governor have been authorised with two distinct powers of mercy under Articles 72 and 161 respectively, the Supreme Court held that the Governor is bound by the State Council’s advice under Article 161 and if the Governor has a different opinion, he has to send it back to the State.

1. The status of GST compensation dues

Mains: The status of GST compensation dues to States and the need for timely release of funds to the States.

As the Prime Minister urged the states to cut taxes on fuel products, the States countered by saying that the pending GST compensation dues have made it difficult to lower fuel taxes.

GST compensation to the States

Status of the outstanding GST compensation due to the States

Nut Graf
As the States are expected to increase their capital expenditure to boost the economic growth, the timely release of GST compensation from the Centre will help the States to plan and implement public infrastructure projects better.

Mains: Inflation pressures in the Indian economy- reasons and impact 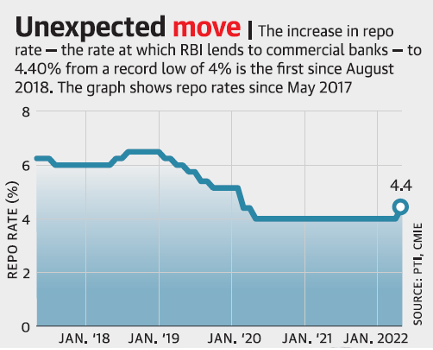 Reasoning for the move:

Impact on the poor:

Uncertainty associated with the pandemic:

Other measures to tame inflation:

Nut Graf
The move to increase the benchmark interest rates is a welcome move given that the inflation rates had been rising. High inflation has a pronounced adverse effect on the poorer segments and also sustained high domestic inflation does not augur well for the medium-term growth prospects as well as financial stability.

Understanding inflation and inflation targeting as per western models:

Concerns with the current approach:

Use of intangible parameters:

Ignoring the domestic factors at play:

Nut Graf
India needs to adopt a model for controlling inflation based on more relevant parameters keeping in mind the fact that inflation in India is more dependent on the prices of agricultural goods and imported oil.

1. List of gifts given by PM Modi to leaders of Nordic countries

The Tree of Life

Syllabus: GS3, Science and Technology – developments and their applications and effects in everyday life.

The Kerala government seeks to contain the spread of the Shigella bacteria. Which of the above pairs is/are correctly matched? (Level: Easy)

Which of the statements given above is/are incorrect?  (Level: Medium)

Which of the statements given above are correct? (Level: Medium)