1. Army comes out against road work on China border

2. India has to complete a long process for SCO membership

3. Fingers crossed as Modi set to meet Xi in Tashkent

2. Not all is bright and shining with LED light: Study

2. Limits of the big freeze

1. Lessons for India in Thailand’s experience on universal healthcare

2. How India’s National Education Policy evolved over the years

a) Withdrawal of the Drugs and Cosmetics (Amendment) Bill, 2013

b) Cabinet approves MoU between India and Germany

b) What makes apparel sector a great job growth driver, find out here

a) Pitfalls in taxing the digital economy

a) There’s no need for a separate Rail Budget

a) Famed qawwalAmjadSabri gunned down in Karachi

b) RBI assures market of liquidity in case of ‘Brexit’

d) After US, France asks NSG members to back India’s bid

g) Govt to do away with Plan, Non-Plan spending classification from 2017-18

3. Fingers crossed as Modi set to meet Xi in TashkentTopic: India and China

Glare forms a veil of luminance that reduces the contrast, thus in turn reducing the visibility of a target.Intense blue spectrum can even damage the retina 2. Limits of the big freezeTopic:Europe, Asia, Russia and America

Bottom-line: Europe and Asia should unite to disallow Chinese domination with Russian collaboration

3. Finding the centreTopic:India , US , China and Russia

2. How India’s National Education Policy evolved over the yearsTopic: Education

How many such policies have we had?

Under what circumstances was the first NEP announced in 1968?

How did NEP II differ from NEP I?

How has the implementation been?

How long before the next NEP?

What has the TSR Subramanian panel recommended?

3. To Read: ISRO’s 20-satellite launch: Explaining the historic feat in Sriharikota
Others:

Keeping in view the objective of make in India, it has been decided to comprehensively review the existing law with two fold objectives viz. to facilitate the ease of doing business and substantially enhancing the quality and efficacy of Indian products. The Ministry of Health and Family Welfare has, accordingly, undertaken an exercise at two levels namely (i) to frame separate rules under the existing Act for regulating medical devices; and (ii) to bring out separate legislations for regulating medical devices and Drugs and Cosmetics

b) Cabinet approves MoU between India and Germany The Union Cabinet has been apprised of signing of a Memorandum of Understanding (MoU) with Steinbeis GmbH Co.KG, Germany for Technology transfer and Technology resourcing in manufacturing, including sub-sectors of Capital Goods. The MoU was signed on 25th April, 2016 during the Industrial Exhibition Hannover Messe 2016 in Hannover, Germany

The amendment in the Protocol will broaden the scope of the existing framework of exchange of tax related information between the two countries, which will help curb tax evasion and tax avoidance. The Protocol will also revise the existing treaty provisions on mutual assistance in collection of taxes.

d)Establishment of Fund of Funds for funding support to Start-ups The Union Cabinethas approved the establishment of “Fund of Funds for Startups” (FFS) at Small Industries Development Bank of India (SIDBI) for contribution to various Alternative Investment Funds (AIF), registered with Securities and Exchange Board of India (SEBI) which would extend funding support to Startups. This is in line with the Start up India Action Plan unveiled by Government in January 2016

e)Union Minister of Human Resource Development announces new UGC foreign academic collaboration regulations Indian Universities and Colleges, having the highest grade of accreditation/ threshold accreditation, will now be able to apply online to the University Grants Commission (UGC) for starting twinning and collaborative arrangement with quality Foreign Educational Institutions (FEIs) in undergraduate and postgraduate programmes leading to the award of a degree. The degree will be awarded by the Indian Educational Institutions (IEIs) alone; joint degrees are not permitted. However, the name of the collaborating FEI can be indicated on the degree, the logo and primacy being of the Indian institution. Credits from collaborating FEI when jointly signed by the IEI shall form part of the transcript. FEI may also sign the transcript/credit issued by the IEI 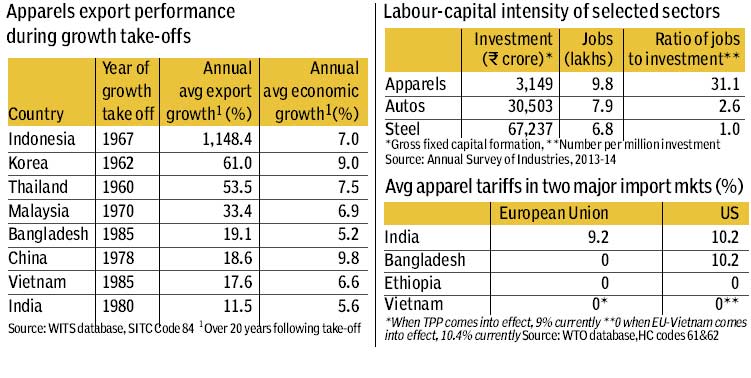 a) Pitfalls in taxing the digital economyTopic: Taxation

a) There’s no need for a separate Rail BudgetTopic: Budget

a) Famed qawwalAmjadSabri gunned down in KarachiIn 2014, the Islamabad Hight Court (IHC) had issued a notice in a blasphemy case to Sabri along with two TV channels for the playing of a qawwali during a morning show

b)  RBI assures market of liquidity in case of ‘Brexit’RBI governor RaghuramRajan had said: “Brexit can be quite damaging if it happens.” However, he had added that RBI was prepared for curb any volatility and reiterated that the country has ‘plenty of reserves.’

c)  ‘Special package to help attract investments’The special package for textile and apparel sector approved by the cabinet is expected to attract investments in the garment sector and give a boost to other segments in the textile value chain.Some incentives have a sunset clause, ie till year 2019. Department of Economic Affairs Secretary Shaktikanta Das said,“These are not open-ended incentives which will continue forever. All incentives will be valid for the next three years. We expect industries to make use of it and to create additional jobs.”

d)  After US, France asks NSG members to back India’s bidAmidst stiff opposition by China to India’s entry into NSG, France today strongly backed New Delhi’s case, saying it will bolster global efforts against nuclear proliferation and asking the members states to take a “positive decision” in the Seoul plenary meeting

e) Climate Change: India plans women-friendly agricultural equipmentMen are migrating to cities, leaving behind women in villages. That’s impacting agriculture as women find it difficult to use heavy equipment used for farming. But that is going to change as the government plans to develop women-friendly equipment to sustain agriculture

f)  Innovation, investment rules to figure at G20 Sherpas meet New issues, including innovation, digitisation and investment rules, will figure at the three-day meet of G20 Sherpas at Xiamen in China beginning June 23. The meet will also discuss the global economic situation and review the progress on preparation for Hangzhou summit to be held in September this year

i) India, Switzerland enhance cooperation in skill developmentIndia and Switzerland today signed an agreement to establish formal cooperation in the fields of skills development and vocational and professional education and trainingThe Memorandum of Understanding (MoU) was signed in Winterthur between State Secretary Mauro Dell’ Ambrogio and Union Minister for Skill Development and Entrepreneurship Rajiv Pratap Rudy