The government of India is divided into three branches: Executive, Legislative and Judiciary. The Judiciary is independent of the other two branches, i.e. they cannot interfere in the affairs of the judiciary. Thus, the courts play an important role in protecting the constitution.

The Supreme Court of India (SC of India), is at the top of the judicial hierarchy and the final court of appeal set up by the Indian Constitution.

It followed by the High Court (HC), which is the apex judicial forum at the state and union territory level. One of the major differences between High Court and Supreme Court is that the decision made by the HC, can be reviewed in the SC, but the decision of the SC is final and binding and no further appeals are allowed. 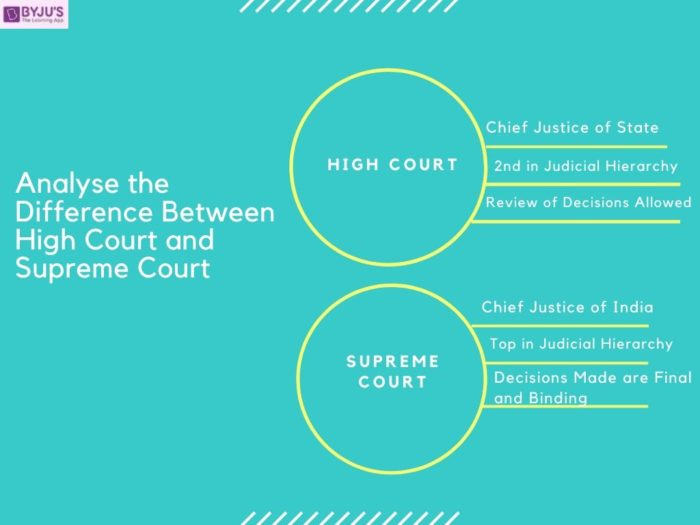 The difference between the High Court and the Supreme Court is given below:

Differences between the High Court and the Supreme Court

What are the 3 powers of the Supreme Court?

The judicial Power shall extend to all Cases, in Law and Equity, arising under this Constitution, the Laws of the United States, and Treaties made, or which shall be made, under their Authority;–to all Cases affecting Ambassadors, other public ministers and Consuls;–to all Cases of admiralty and maritime Jurisdiction

What is the role of High Court in India?

High Courts have the power of judicial review. They have the power to declare any law or ordinance unconstitutional if it is found to be against the Indian Constitution. A High Court alone can certify the cases fit for appeal before the Supreme Court.

You can find more preparation materials for the IAS Exam by referring to the links given below in the table: