3. Gujarat must give up terror bill

4. Looking to a better tomorrow

Topic: International Relations
Category: U.S., India, Pakistan
Location: The Hindu, Page 1
Key Points:
De-hyphenating refers to a policy started by the U.S. government under President Bush , of dealing with India and Pakistan in different silos, without referring to their bilateral relations.

It enabled the U.S. to build closer military and strategic ties with India without factoring in the reaction from Pakistan, and to continue its own strategy in Afghanistan with the help of the Pakistan military without referring back to India. 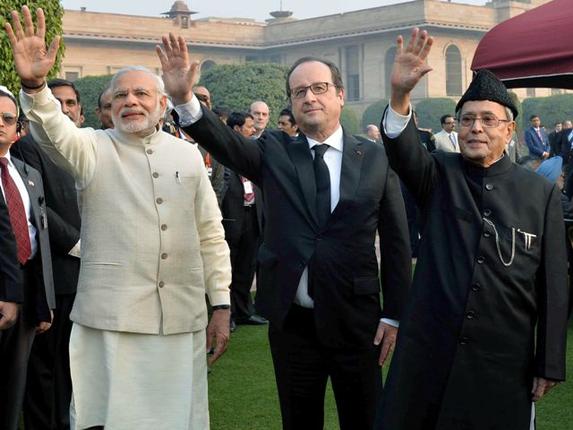 Key Points:
President François Hollande’s visit is the fifth such by a French leader to have been honoured as the chief guest at the Republic Day, more so than any other country.

Cooperation on Counter-terrorism:
• The terrorist attacks last year, on the Charlie Hebdo office in January and at multiple locations in Paris in November, have changed the way France looks at global terrorism.
• Radicalisation and the growing appeal of the ideology of global jihad is a real threat.
• This resulted in a standalone Joint Statement on counter-terrorism

Nuclear and Space Cooperation:
• A push has been given to the Jaitapur nuclear plant negotiations by seeking to conclude these by the end of 2016
• To mark 50 years of India-France space cooperation, new projects for cooperation between the Indian Space Research Organisation and the French government space agency, Centre national d’études spatiales (CNES) have been announced, dealing with environment and weather monitoring, mapping of water resources and a joint Thermal Infrared Earth observation mission.

Defence Cooperation:
• The joint ventures (JV) proposed to be set up between private sector entities in both countries that can provide a much needed boost to “Make in India” in defence.

Emerging Areas of Cooperation:
• Among the emerging areas of cooperation are homeland security, cyber security, special forces like the National Security Guard and its French counterpart GIGN, and intelligence sharing to tackle the common threats of terrorism and global criminal networks.

• Closely linked are concerns about Internet governance, surveillance by external powers and the dominance of U.S. companies in this field. Maritime security in the Indian Ocean region is another sector ripe for greater cooperation, given French presence by virtue of its territories (the Reunion Islands) for maintaining safety of sea lanes, tackling piracy and enhancing maritime domain awareness.

• Cooperation in “strategic” areas is growing and the government-to-government relationship is the principal driver for this.
• Two areas that have been lagging are economic and trade relations as well as the people-to-people exchanges.
• Bilateral trade between the two countries is at $8 billion, well below potential.
• French foreign direct investment has picked up and there are more than 800 French enterprises operating in India.
• These include industry leaders like Alstom, Airbus, Schneider, Alcatel, Total, BNP Paribas, L’Oréal, Renault, Sanofi Aventis, Veolia, Engie (GDF Suez), Thales, Vinci, etc. Capgemini, an IT major has a large workforce in India.
• Nagpur, Chandigarh and Puducherry have been identified as three cities where French technical assistance and funding has also been promised.
• However, the challenge will be to develop viable public-private partnerships that can generate long-term funding and also make the projects self-sustaining in the long run.

People-to-People Relationships:
• Attempts have been made to energise the people-to-people relationship by focussing on educational exchanges and skill development which creates a resource pool as Indo-French JVs generate greater employment opportunities.
• The number of Indian students going to France annually is 2,500 while the number of Chinese students is 10 times larger.
• Allowing larger number of French youth to intern in enterprises in India and easing visa norms for Indian students to work for two years after completing their education in France are steps in the right direction.

3. Gujarat must give up terror bill

Topic: Governance
Category: Legislations
Location: The Hindu, Page 10
Key Points:
The controversial Gujarat Control of Terrorism and Organised Crime Bill (GCTOC), 2015, has been facing objections on the ground that it contains some draconian provisions.

The controversial nature of the GCTOC Bill became apparent after A.P.J. Abdul Kalam as President objected to a clause that made evidence based on interception of communication admissible in court.

India’s repeated experiments with anti-terrorism laws have been, by and large, unsuccessful.

The Terrorist and Disruptive Activities (Prevention) Act, 1985, a law considered as draconian as the Rowlatt Act of the colonial era, and its latter-day version, the Prevention of Terrorism Act, 2003, had been allowed to lapse after it was found that they were prone to persistent misuse.

However, with the substantive amendments made to the Unlawful Activities (Prevention) Act in 2012, the country does have an effective law to curb modern-day terrorism.

Conclusion:
There is really no need for more State-level laws of such a nature. Police investigators need better resources and training to combat organised crime and terror, and not laws that abridge and modify conventional criminal procedure to the detriment of human rights.

4. Looking to a better tomorrow

• India, a country with an ancient and healthy history of celebrating alternative sexualities, ironically continues to criminalise what it calls “unnatural sex against the order of nature”.
• In its inspired 2009 judgment, the Delhi High Court read down Section 377, thus allowing consensual sex between same-sex individuals. It was received with jubilation by not just the LGBT community but by every Indian who believes that in a progressive, liberal democracy. Unfortunately, the ruling was overturned by the Supreme Court in 2013.
• The 2013 judgment sought to defend Section 377 by claiming that it does not criminalise a community or a sexual orientation but merely identifies certain acts as offences. But how does one separate the act from the person?
• Hijras, trans men, and gay men constantly face physical violence, sexual abuse, and financial extortion by the police.
• The second aspect of the 2013 judgment was that the Supreme Court left it to the legislature to amend the law if it is indeed discriminatory.

The Supreme Court is now to hear a curative petition on Section 377 on February 2, 2016. 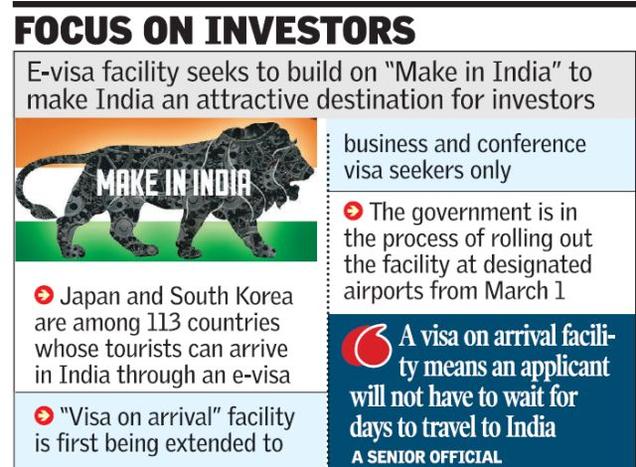 Key Points:
• After Prime Minister Narendra Modi’s announcement in December that all Japanese citizens would get “visas on arrival”, the government has decided to extend it only to the business community for now.
• The government is actively considering including South Korea in this category.
• Japan and South Korea are already on the list of 113 countries whose citizens can arrive in India through an electronic tourist visa on arrival (e-TV) platform.
• A visa on arrival facility means that an applicant would not have to wait for days to travel to India. It will cut red tape and an applicant would be informed within three days through e-mail whether he or she can travel to a destination in India. The Indian Embassy has its own data and it will scan for suspicious travellers.
Civil Services aspirants are requested to go through the essential points relating to the “Make in India” scheme launched by the Government of India. Refer the below video for important points on this scheme. 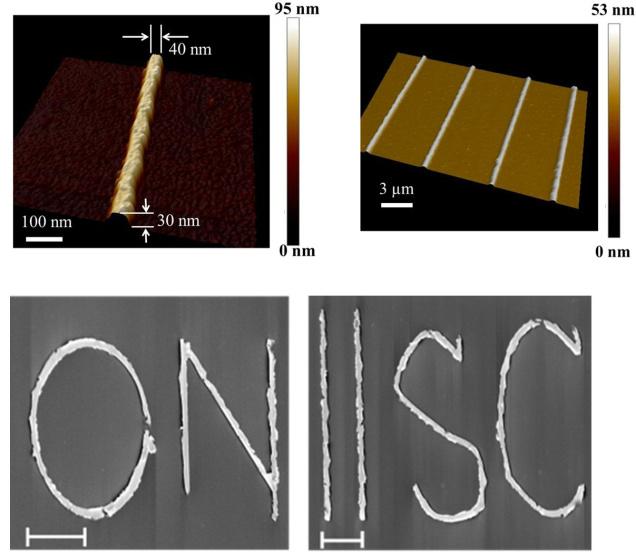 Keypoints:
• An invention by Bengaluru-based scientists at IISc is all set to make inroads into the billion-dollar nanoelectronics industry.
• This is disruptive because the technology can drastically reduce the cost of the existing state-of-the-art e-beam lithography and optical lithography.
• This invention is a new way to etch thin lines on a substrate using electrodes, termed electrolithography.
• This will come in very useful in inscribing, for instance, nanometer-scale circuits which make up IC chips, minute transistors among others.
• Once developed into prototypes, this technique could in principle reduce the cost of the equipment used presently from about five crore rupees per piece to merely Rs.15-20 lakhs. This would come in useful not just in the industry but in academia, too, with more colleges being able to afford research in nanotechnology.

In 2016’s first Mann Ki Baat monthly radio broadcast to the nation, Modi touched upon varying topics, such as raising awareness about the Pradhan Mantri Fasal Bima Yojana, the potential of the Start-up India scheme, popularising khadi and the International Fleet Review to be held in Visakhapatnam soon.
Modi said the biggest offer in this “gift” to farmers was that the premium rate has been kept “really low.” The rate for Kharif crop has been kept at 2 per cent, while for Rabi crop it is 1.5 per cent, he said. “If any farmer is deprived of these benefits, will he not suffer losses?”
Civil Services aspirants should read about the key points regarding the Pradhan Mantri Fasal Bima Yojana. Below are the salient features of this scheme:

1. Farmers will now have to pay a uniform premium of only 2 percent for all Kharif crops and 1.5% for all Rabi crops.
2. In the case of annual commercial and horticultural crops, farmers will now have to pay a premium of only 5 percent. The balance premium will be paid by the Government to provide full insured amount to the farmers against crop loss on account of natural calamities.
3. There will not be any upper limit on Government subsidy. Even if the balance premium is 90%, it will be borne by the Government.
4. Earlier, there was a provision of capping the premium rate which resulted in low claims being paid to farmers.
Now, this capping is removed and farmers will get full sum insured without any reduction against their claim.
5. The usage of technology will be encouraged to a great extent. Smart phones will be used to capture and upload data of crop cutting to reduce the delays in claim payment to farmers. Remote sensing will be used to reduce the number of crop cutting experiments. 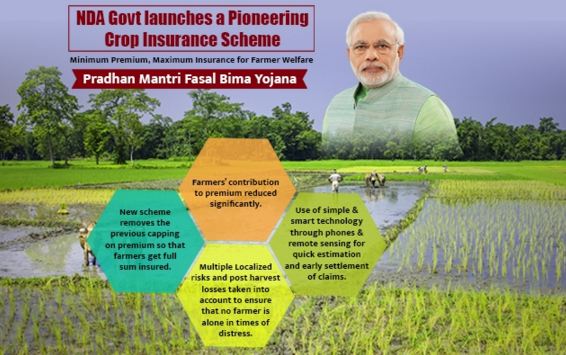 Key Points:
• The International Monetary Fund has made country quota reforms agreed by the G20 in 2010 a reality.
• It has adopted a country quota distribution that better reflects the power balance of emerging markets in the global economy.
• With this structural shift, more than 6 percentage points of the quota, including both the Fund’s capital and its proportionate voting rights, have been transferred from developed to emerging economies.
• The greatest gains from the reforms accrue to the IMF itself, as the combined capital that its 188 member-countries contribute will increase to approximately $659 billion from nearly $329 billion.
• India and China, have respectively increased their voting shares by 0.292 and 2.265 percentage points.

1. There will not be any upper limit on Government subsidy. Even if the balance premium is 90%, it will be borne by the Government.

2. Farmers will now have to pay a uniform premium of only 2 percent for all Kharif crops and 1.5% for all Rabi crops.

3. The usage of technology will be encouraged to a great extent. Smart phones will be used to capture and upload data of crop cutting to reduce the delays in claim payment to farmers.