On 28 October 1627, Mughal Emperor and son of Akbar, Jahangir died at Rajauri, Kashmir. 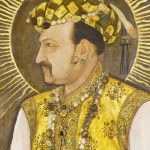