Just solving the Chemistry question paper will not give any fruitful result to students. To get the maximum benefit of solving the previous years Chemistry papers, students must check their answer sheet by themselves and should find out their mistakes. Doing, so will help them in identifying the loopholes in their exam preparation and will also improve their performance for the exam. So, go through the ICSE Class 10 Chemistry Question Paper 2015 Solution and leave no stone unturned in the board exam preparation.

Students can have a look at the ICSE Class 10 Chemistry Question Paper Solution 2015 below: 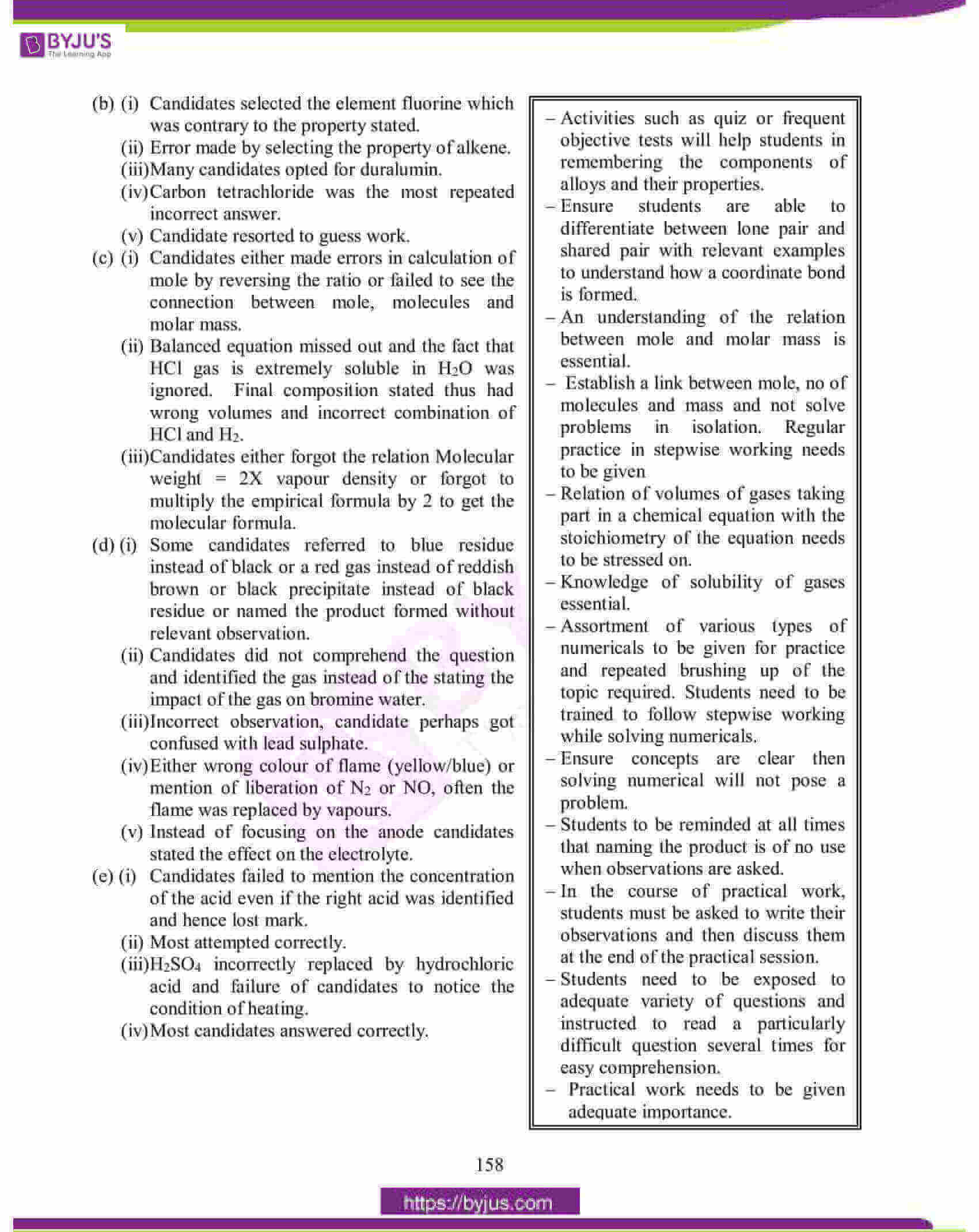 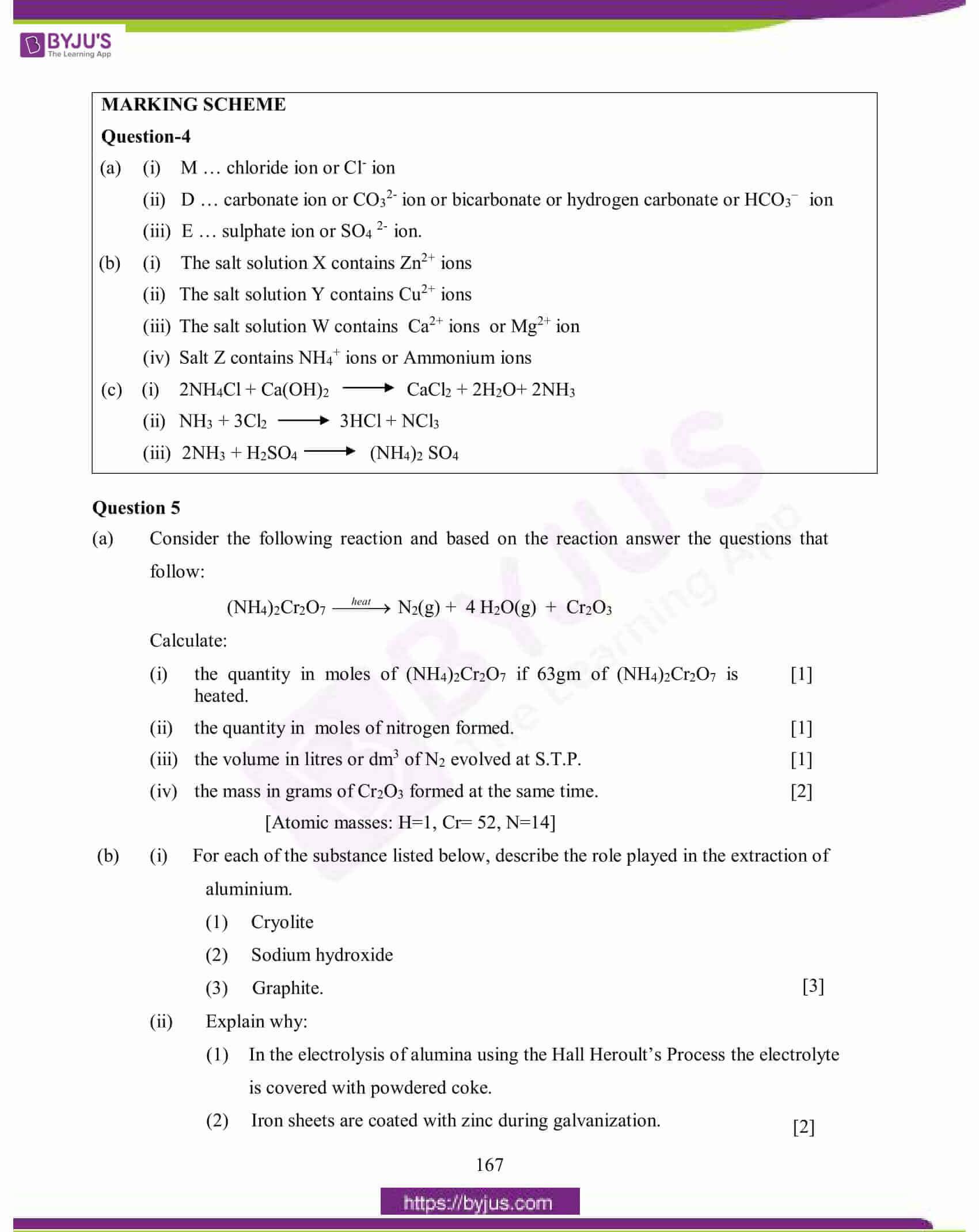 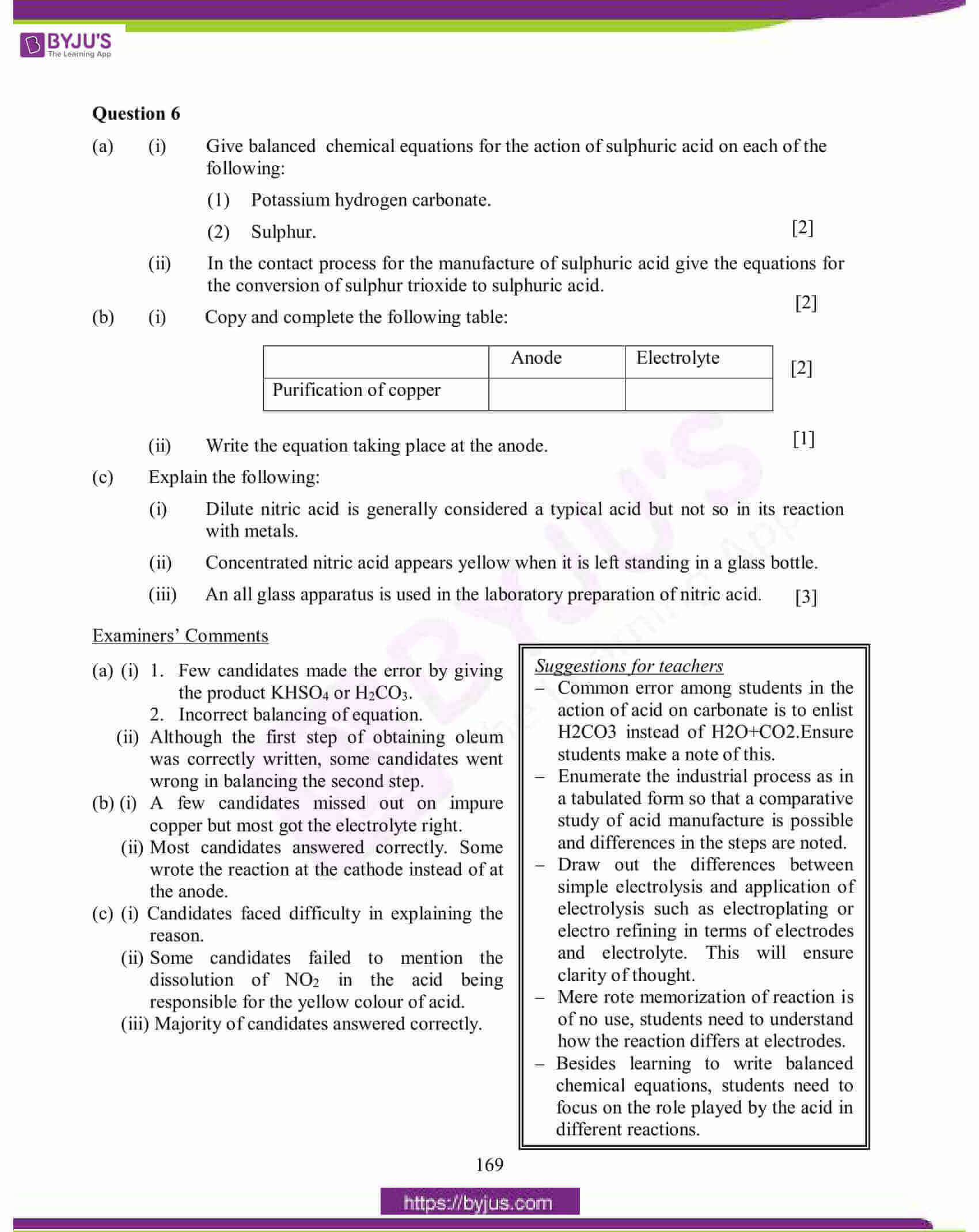 Students can have an overview of the difficult and confusing topics of 2015 Chemistry Science Paper 2.

(a) Select from the list the gas that matches the description given in each case:

(i) This gas is used as a reducing agent in reducing copper oxide to copper.

(iii) This gas is used for welding purposes.

(iv) This gas is also a saturated hydrocarbon.

(v) This gas has a characteristic rotten egg smell.

(b) Choose the most appropriate answer for each of the following:

(i) Among the elements given below, the element with the least electronegativity is:

(ii) Identify the statement which does not describe the property of alkenes:

(A) They are unsaturated hydrocarbons

(B) They decolourise bromine water

(C) They can undergo addition as well as substitution reactions

(iii) This is not an alloy of copper:

(iv) Bonding in this molecule can be understood to involve coordinate bonding.

(v) Which of the following would weigh the least?

(i) Calculate the mass of Calcium that will contain the same number of atoms as are present in 3.2 gm of Sulphur. [Atomic masses: S=32, Ca=40]

(ii) If 6 litres of hydrogen and 4 litres of chlorine are mixed and exploded and if water is added to the gases formed, find the volume of the residual gas.

(iii) If the empirical formula of a compound is CH and it has a vapour density of 13, find the molecular formula of the compound.

(d) State one relevant observation for each of the following:

(i) When crystals of copper nitrate are heated in a test tube.

(ii) When the gaseous product obtained by dehydration of ethyl alcohol is passed through bromine water.

(iv) When ammonia gas is burnt in an atmosphere of excess oxygen.

(e) Identify the acid which matches the following description (i) to (v):

(i) The acid which is used in the preparation of a non-volatile acid.

(ii) The acid which produces sugar charcoal from sugar.

(iii) The acid which is prepared by catalytic oxidation of ammonia.

(iv) The acid on mixing with lead nitrate solution produces a white precipitate which is insoluble even on heating.

(v) The acid on mixing with silver nitrate solution produces a white precipitate which is soluble in excess ammonium hydroxide.

(f) Give appropriate scientific reasons for the following statements:

(i) Zinc oxide can be reduced to zinc by using carbon monoxide, but aluminium oxide cannot be reduced by a reducing agent.

(iii) During electrolysis of molten lead bromide graphite anode is preferred to other electrodes.

(v) Electrolysis of molten lead bromide is considered to be a redox reaction.

(g) (i) Give balanced chemical equations for the following conversions A, B and C:

(i) Which one of these elements will form ions most readily and why?

No. of moles are equal then number of atoms also will be equal

4 litres of chlorine will react with 4 litres of hydrogen, HCl gas is highly soluble in water. Therefore residual gas will be un reacted chlorine = (6 – 4) = 2 litres

(i) Reddish brown gas of nitrogen dioxide gas is evolved and black residue of CuO is formed.

(i) Aluminium is more reactive than zinc and has a high affinity for oxygen, it cannot be reduced by reducing agent.

(ii) Carbon tetrachloride consists of only molecules hence it is a non-electrolyte, it cannot conduct electricity.

(iii) Graphite is inert by nature it would not react with bromine vapours which evolve at the anode.

(iv) Acetic acid is a weak acid it consists of less number ions at a given concentration in comparison to sulphuric acid of the same concentration which is a strong acid.

(v) The metallic ion of the electrolyte moves towards the cathode there it gains electrons and gets deposited as neutral metal atom and hence gets reduced. The anion or Br– ion loses its electron at the anode and gets oxidised.

(a) Arrange the following as per the instructions given in the brackets:

(b) Choose the most appropriate answer from the following list of oxides which fit the description. Each answer may be used only once:

(ii) An oxide which dissolves in water forming an acid.

(iv) A covalent oxide of a metalloid.

(i) Write an equation to show how Y forms an ion.

(ii) If Y is a diatomic gas, write an equation for the direct combination of X and Y to form a compound.

(a) Give balanced chemical equations for the following conversions:

(i) Ethanoic acid to ethyl ethanoate.

(b) Using their structural formulae identify the functional group by circling them:

(i) Process by which ethane is obtained from ethene.

(ii) A hydrocarbon which contributes towards the greenhouse effect.

(iii) Distinctive reaction that takes place when ethanol is treated with acetic acid.

(iv) The property of elements by virtue of which atoms of the element can link to each other in the form of a long chain or ring structure.

(v) Reaction when an alkyl halide is treated with alcoholic potassium hydroxide.

(a) Identify the anion present in each of the following compounds:

(i) A salt M on treatment with concentrated sulphuric acid produces a gas which fumes in moist air and gives dense fumes with ammonia.

(ii) A salt D on treatment with dilute sulphuric acid produces a gas which turns lime water milky but has no effect on acidified potassium dichromate solution.

(b) The following table shows the tests a student performed on four different aqueous solutions which are X, Y, Z and W. Based on the observations provided, identify the cation present:

(c) Give balanced chemical equations for each of the following:

(i) Lab preparation of ammonia using an ammonium salt.

(a) Consider the following reaction and based on the reaction answer the questions that follow:

(ii) the quantity in moles of nitrogen formed.

(iv) the mass in grams of Cr2O3 formed at the same time.

(b) (i) For each of the substances listed below, describe the role played in the extraction of aluminium.

(a) (i) Give balanced chemical equations for the action of sulphuric acid on each of the following:

(b) (i) Copy and complete the following table:

(ii) Write the equation taking place at the anode.

(i) Dilute nitric acid is generally considered a typical acid but not so in its reaction with metals.

(ii) Concentrated nitric acid appears yellow when it is left standing in a glass bottle.

(iii) An all glass apparatus is used in the laboratory preparation of nitric acid.

(ii) Conc. HNO3 decomposes to form nitrogen dioxide which dissolves in it.

Conc. HNO3 produces reddish brown gas which dissolves in it.

(iii) HNO3 vapours are very corrosive in nature / they react with rubber or cork / they attack or damage or corrode or destroy any other material.

(a) The following questions are pertaining to the laboratory preparation of hydrogen chloride gas:

(i) Write the equation for its preparation mentioning the condition required.

(ii) Name the drying agent used and justify your choice.

(iii) State a safety precaution you would take during the preparation of hydrochloric acid.

(b) An element L consists of molecules.

(i) What type of bonding is present in the particles that make up L?

(ii) When L is heated with iron metal, it forms a compound FeL. What chemical term would you use to describe the change undergone by L?

(c) From the list of the following salts choose the salt that most appropriately fits the description given in the following:

(i) A deliquescent salt.

(iii) On heating, this salt gives a yellow residue when hot and white when cold.

(iv) On heating this salt, a brown coloured gas is evolved.

P2O5 and CaO react with HCl vapours, H2SO4 does not

(ii) Concentrated sulphuric acid or H2SO4 is used as the drying agent.

(ii) L is getting reduced

The ICSE Class 10 Chemistry Question Paper Solution 2015 must have helped students with their exam preparation. The answers in the Solution pdf have provided an in-depth to 2015 questions and the way answers to be written to score high marks in the board exam. Apart from the 2015 paper solution, students can find the answers to other papers of ICSE Class 10 Previous Years Questions by clicking here. Happy Learning and stay tuned to BYJU’S for the latest update on ICSE/CBSE/State Boards/Competitive exams. Also, don’t forget to download the BYJU’S App.