ICSE Class 10 Chemistry Previous year question papers give an idea on the paper pattern, important topics from which questions are expected to be asked in the exam. So, it becomes crucial for students to solve the ICSE Class 10th previous year papers for board exam preparation. We have provided the ICSE Class 10 Chemistry Question Paper 2017 Solution to help students with their exam preparation. The answers provided in the solution pdf are based on the step marking as per the board exam marking scheme. If a student expresses the answer in the same manner as mentioned in the solution pdf, then he/she will surely score high marks in the exam.

Students can have a look at the ICSE Class 10 Chemistry Question Paper Solution 2017 below: 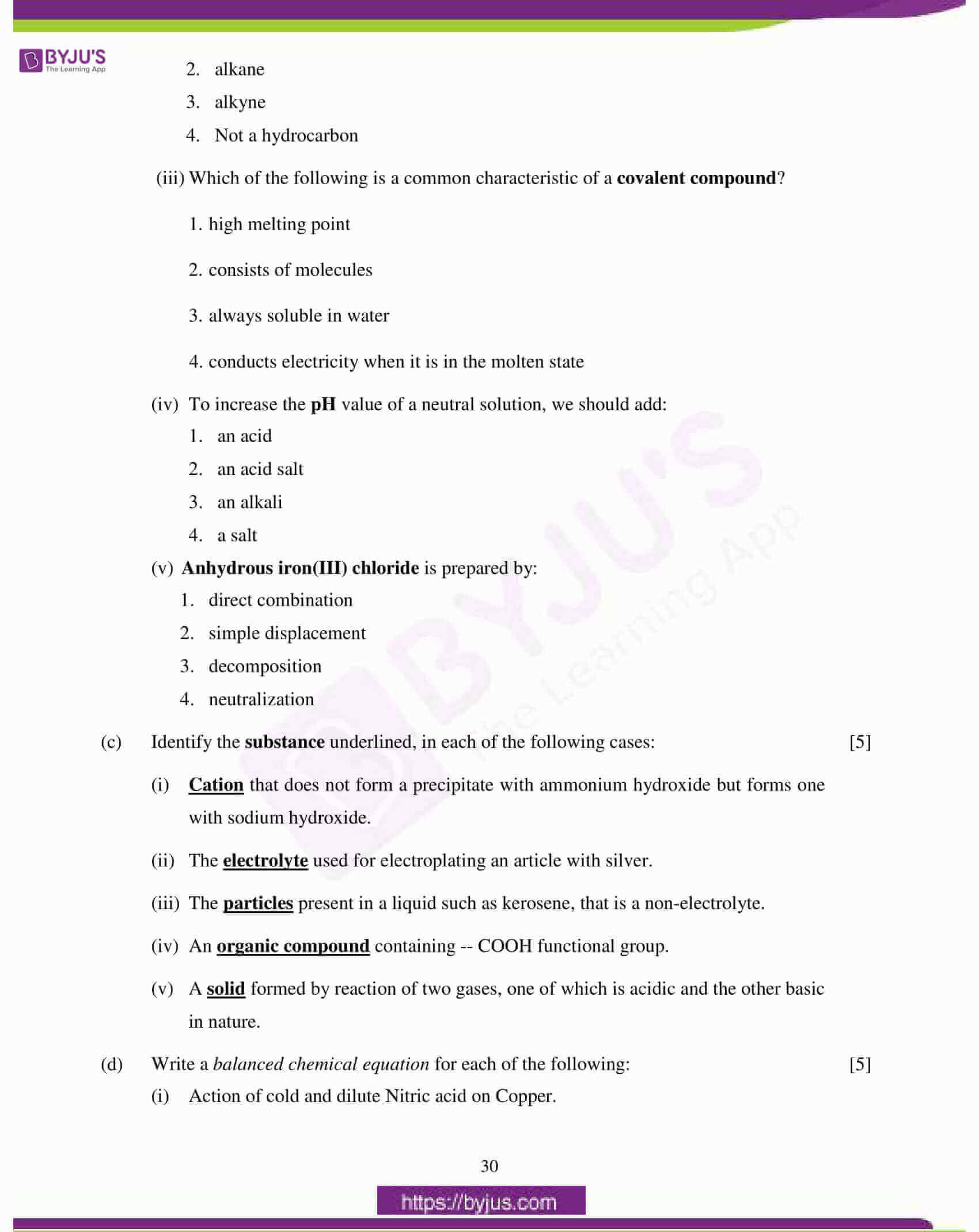 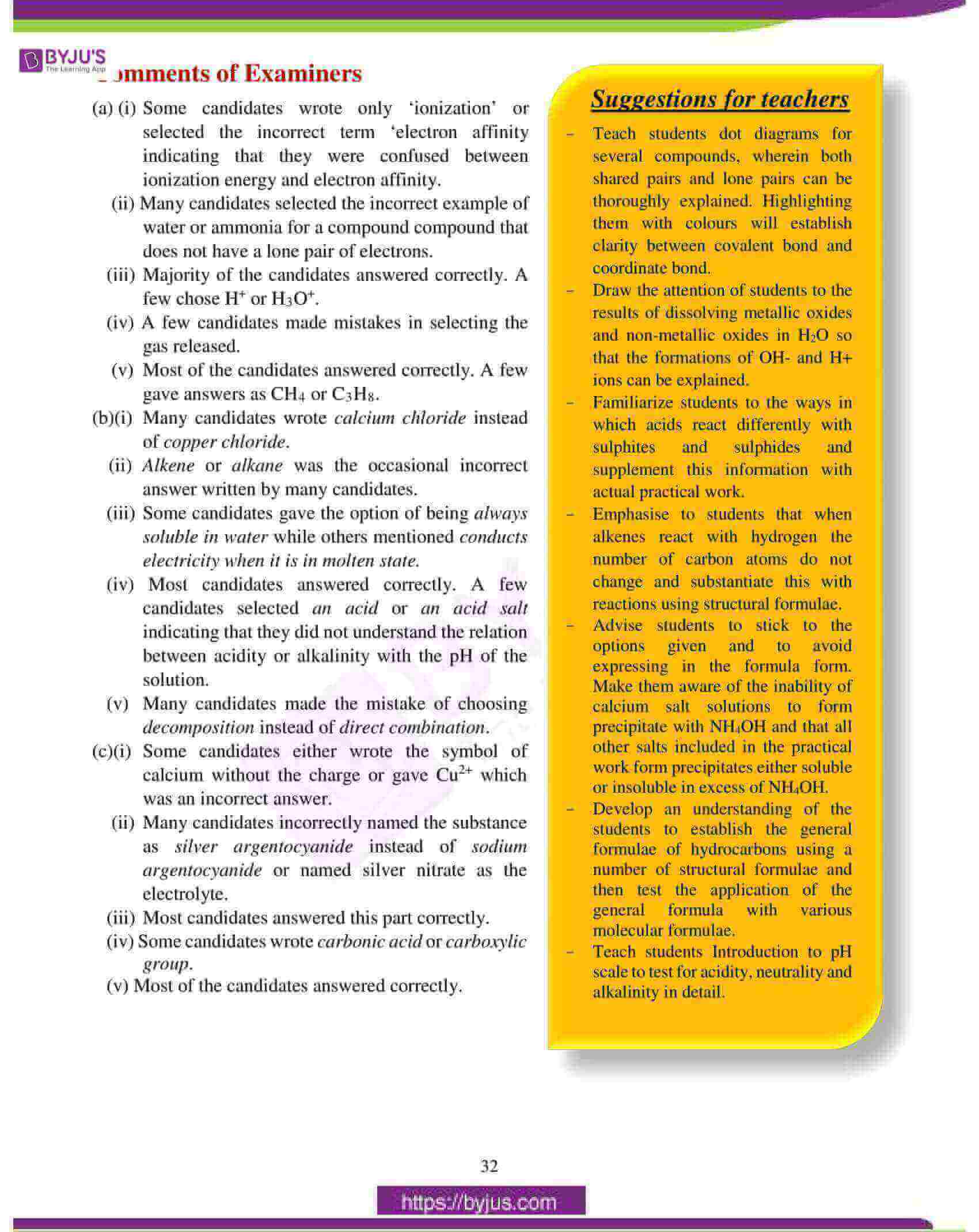 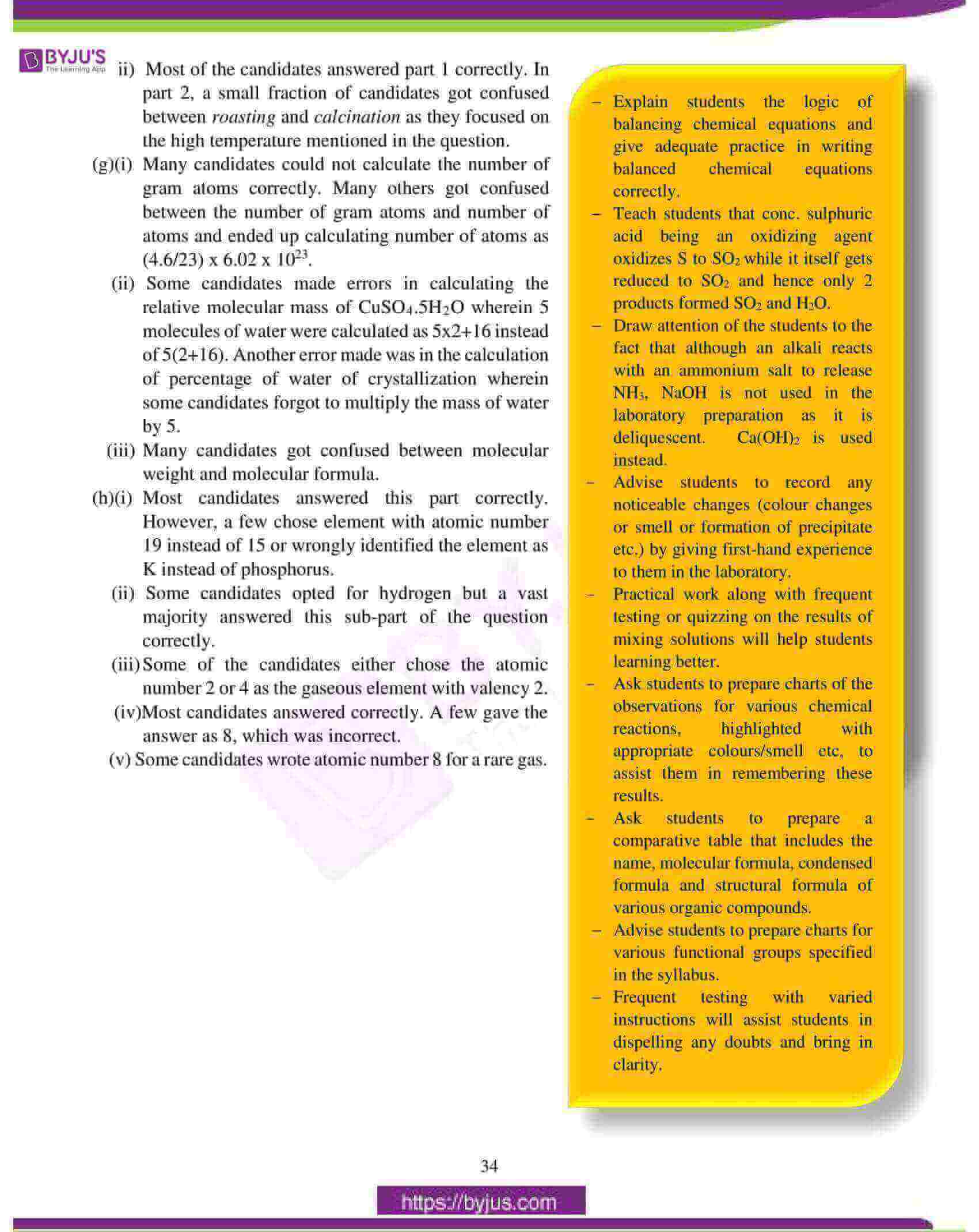 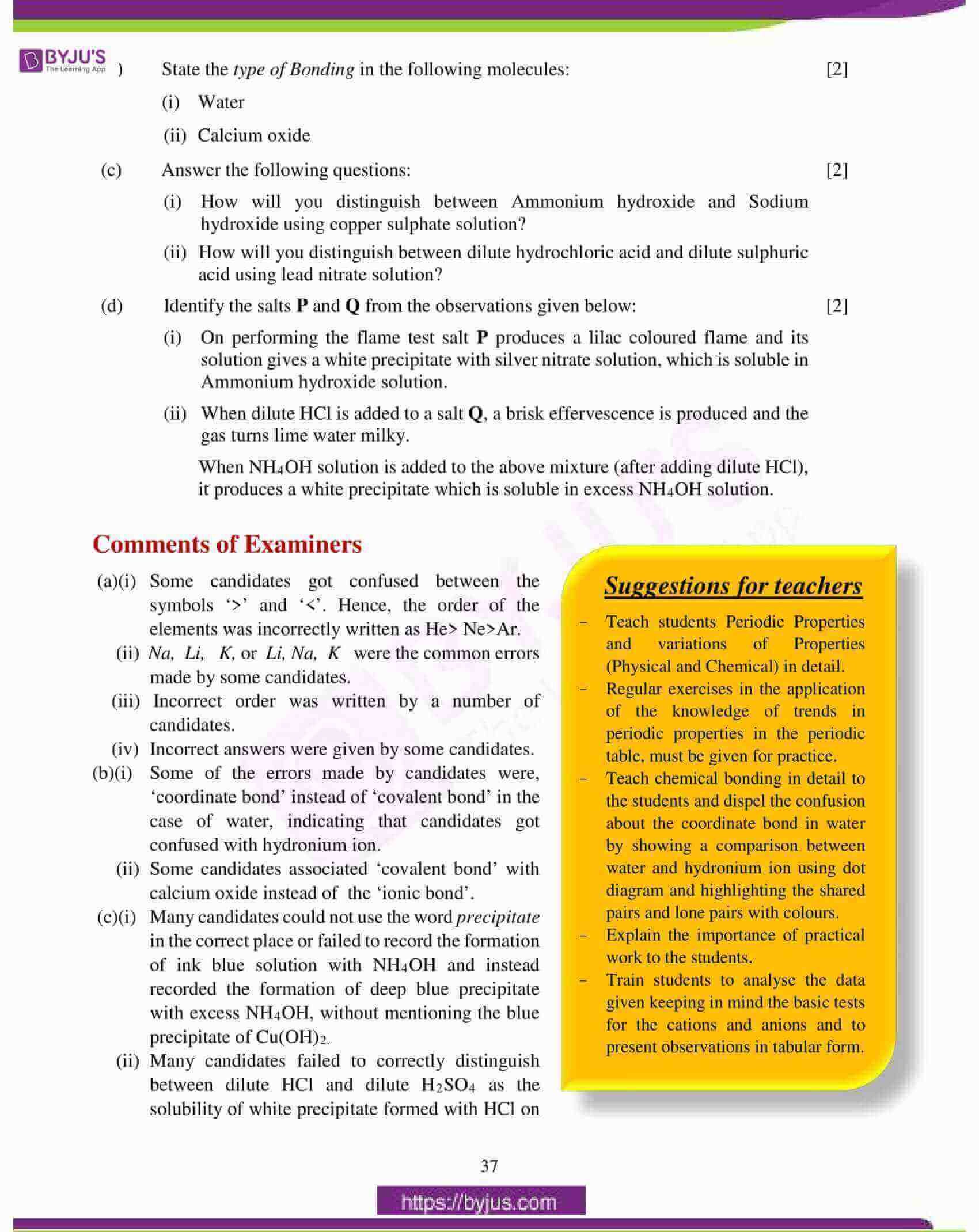 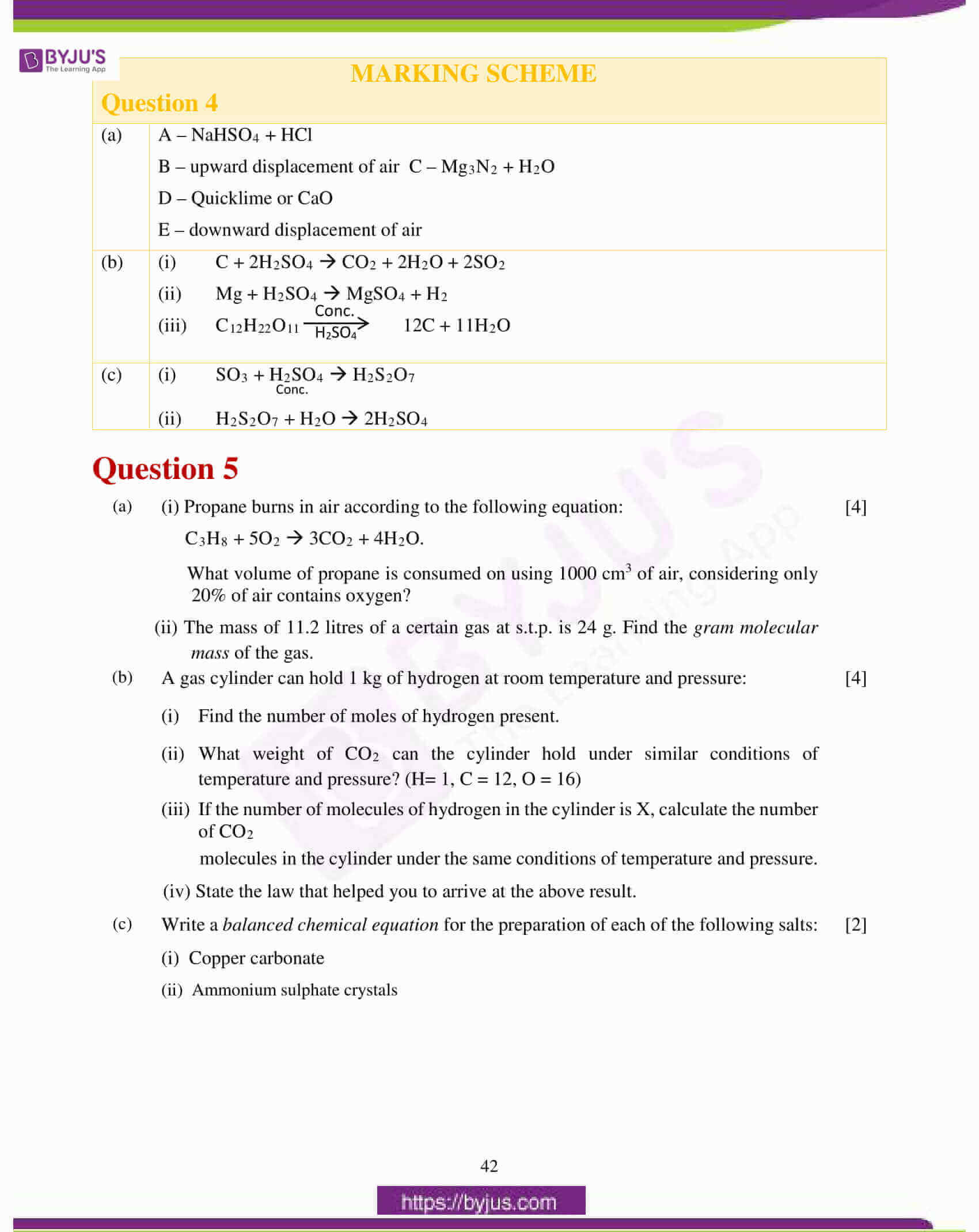 (a) Fill in the blanks from the choices given in brackets:

(i) The energy required to remove an electron from a neutral isolated gaseous atom and convert it into a positively charged gaseous ion is called _______________.

(b) Choose the correct answer from the options given below:

(i) A chloride which forms a precipitate that is soluble in excess of ammonium hydroxide, is:

(ii) If the molecular formula of an organic compound is C10H18 it is:

(iii) Which of the following is a common characteristic of a covalent compound?

(iv) To increase the pH value of a neutral solution, we should add:

(c) Identify the substance underlined, in each of the following cases:

(i) Cation that does not form a precipitate with ammonium hydroxide but forms one with sodium hydroxide.

(ii) The electrolyte used for electroplating an article with silver.

(iii) The particles present in a liquid such as kerosene, that is a non-electrolyte.

(v) A solid formed by reaction of two gases, one of which is acidic and the other basic in nature.

(d) Write a balanced chemical equation for each of the following:

(i) Action of cold and dilute Nitric acid on Copper.

(iii) Preparation of methane from iodomethane.

(e) State one relevant observation for each of the following reactions:

(i) Addition of ethyl alcohol to acetic acid in the presence of concentrated Sulphuric acid.

(iv) Burning of ammonia in air.

(f) (i) Draw the structural formula for each of the following:

(ii) Calculate the percentage of water of crystallization in CuSO4.5H2O

(i) A solid non-metal belonging to the third period.

(iii) A gaseous element with valency 2.

(iv) An element belonging to Group 2.

(a) (i) Ionisation potential

(iv) SO2 or Sulphur dioxide

(iii) 2 or consists of molecules

(iv) Burns with a green flame. (a) Arrange the following as per the instruction given in the brackets:

(i) He, Ar, Ne (Increasing order of the number of electron shells)

(b) State the type of Bonding in the following molecules:

(d) Identify the salts P and Q from the observations given below:

(i) On performing the flame test salt P produces a lilac coloured flame and its solution gives a white precipitate with silver nitrate solution, which is soluble in Ammonium hydroxide solution.

(ii) When dilute HCl is added to a salt Q, a brisk effervescence is produced and the

When NH4OH solution is added to the above mixture (after adding dilute HCl), it produces a white precipitate which is soluble in excess NH4OH solution

(d) (i) KCl or potassium chloride

(a) Draw an electron dot diagram to show the formation of each of the following compounds:

(b) State the observations at the anode and at the cathode during the electrolysis of:

(c) Select the ion in each case, that would get selectively discharged from the aqueous mixture of the ions listed below: 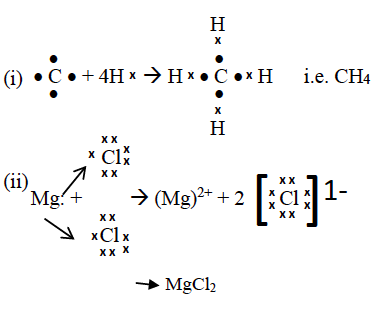 (b) (i) Reddish brown fumes at the anode

Silvery grey deposit at the cathode

(ii) Size of the anode decreases or anode gets consumed

Reddish brown deposit of copper at the cathode.

(a) Certain blank spaces are left in the following table and these are labelled as A, B, C,

D and E. Identify each of them.

(i) The oxidizing action of concentrated Sulphuric acid on Carbon.

(ii) The behavior of H2SO4 as an acid when it reacts with Magnesium.

(iii) The dehydrating property of concentrated Sulphuric acid with sugar.

(c) Write balanced chemical equations to show how SO3 is converted to Sulphuric acid in the contact process.

(a) (i) Propane burns in air according to the following equation:

What volume of propane is consumed on using 1000 cm3 of air, considering only

(b) A gas cylinder can hold 1 kg of hydrogen at room temperature and pressure:

(i) Find the number of moles of hydrogen present.

molecules in the cylinder under the same conditions of temperature and pressure.

(iv) State the law that helped you to arrive at the above result.

(c) Write a balanced chemical equation for the preparation of each of the following salts: (iv) According to Avogadro’s law, equal volumes of all gases contain the same number of molecules under the same conditions of temperature and pressure.

(c) (i) Any soluble salt of copper reacted with sodium, potassium or ammonium carbonate solution

(a) Give a balanced chemical equation for each of the following:

(i) Action of concentrated Nitric acid on Sulphur.

(b) Identify the term or substance based on the descriptions given below:

(i) Ice like crystals formed on cooling an organic acid sufficiently.

(iii) The property by virtue of which the compound has the same molecular formula but different structural formulae.

(iv) The compound formed where two alkyl groups are linked by group.

(c) Give a balanced chemical equation for each of the following:

(i) Preparation of ethane from Sodium propionate

(b) (i) glacial acetic acid

(a) Name the following:

(i) The process of coating of iron with zinc.

(ii) An alloy of lead and tin that is used in electrical circuits.

(iii) An ore of zinc containing its sulphide.

(iv) A metal oxide that can be reduced by hydrogen.

(b) Answer the following questions with respect to the electrolytic process in the extraction of aluminum:

(ii) Explain why powdered coke is sprinkled over the electrolytic mixture.

(c) Complete the following by selecting the correct option from the choices given:

(b) (i) Cryolite – lowers the fusion temperature of the electrolyte.

Fluorspar – increases the conductivity of the electrolyte or acts as a solvent.

(ii) to prevent the heat loss from the electrolyte.

We hope ICSE Class 10 Chemistry Question Paper Solution 2017 must have helped students in their exam preparation. We have also compiled the solutions of other subjects of ICSE Class 10 Previous Years Question Papers at one place. Students can access them by clicking here. Stay tuned to BYJU’S for the latest update on ICSE/CBSE/State Boards/Competitive exams and don’t forget to download the BYJU’S App.