Students do not put much effort into English Language subjects as they don’t take this subject seriously. This is where students make mistakes. They forget that to get an overall high score in class 10 ICSE Exam; they have to focus on all subjects equally. So, to help them prepare better for the exam, we have provided the ICSE Class 10 English Language Question Paper Solution 2017. Students can also download the solution pdf and can refer to it anytime offline. The solutions contain the answers to the questions provided in the paper, along with the marking scheme.

Students can have a look at the ICSE Class 10 English Question Paper Solution 2017 below: 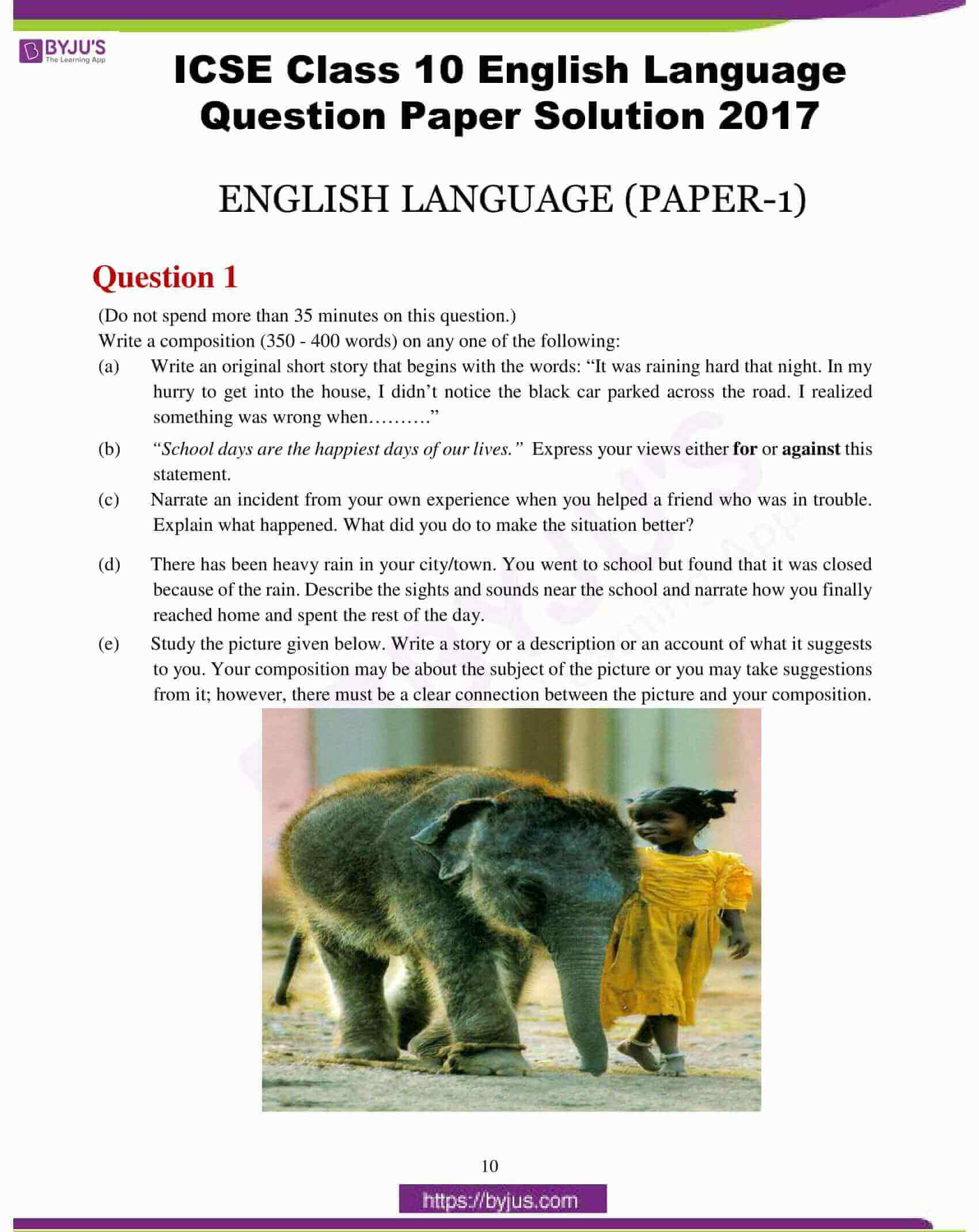 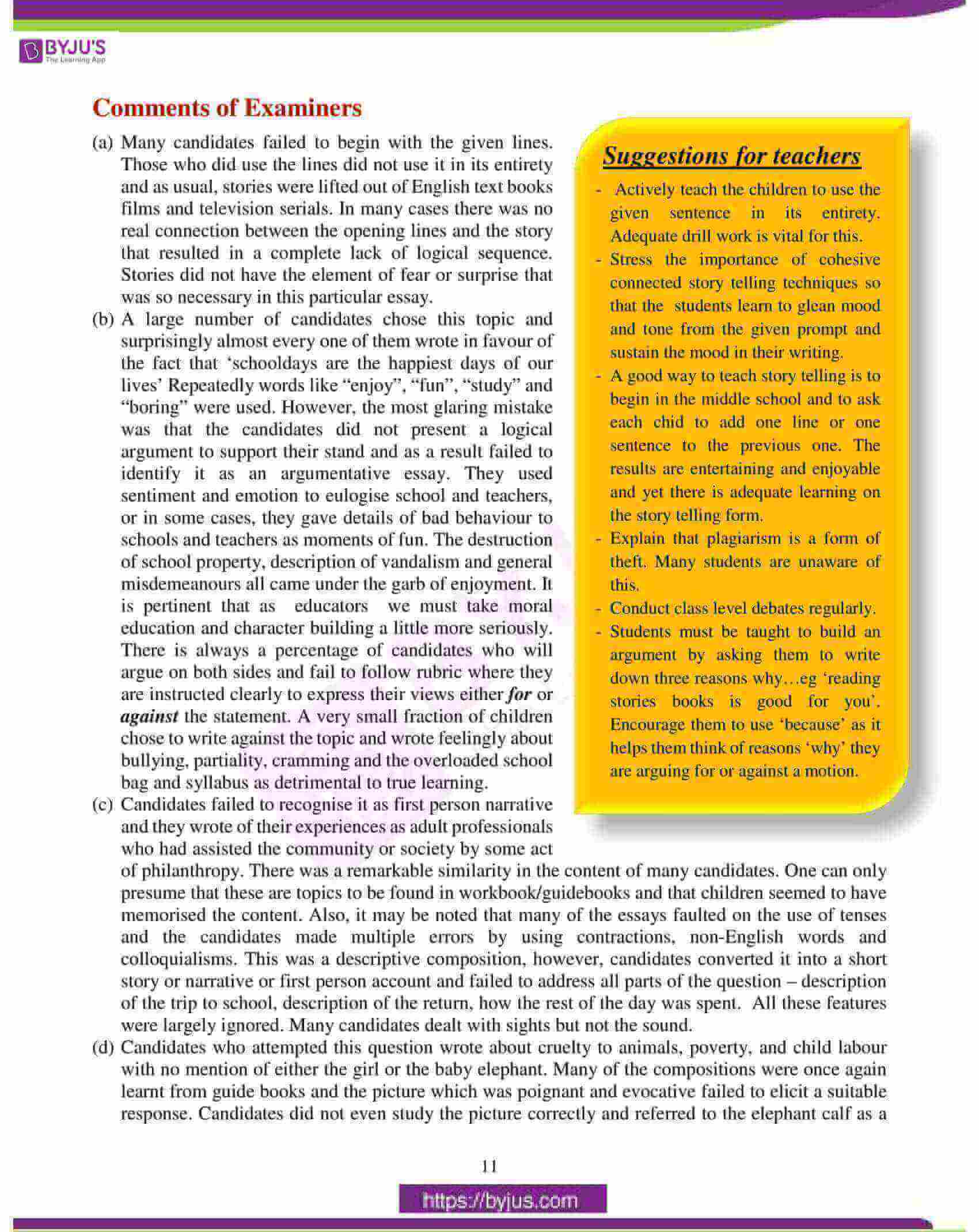 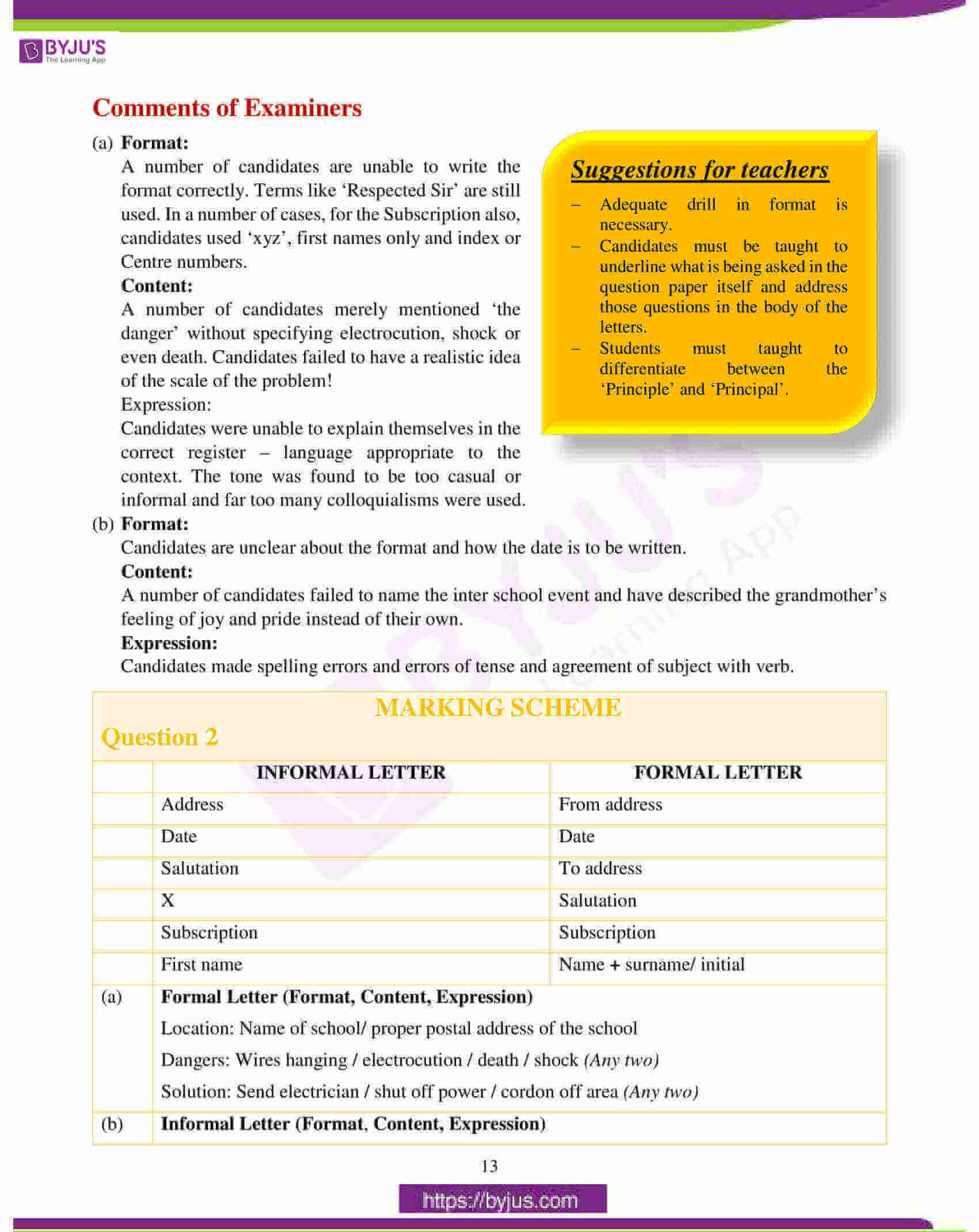 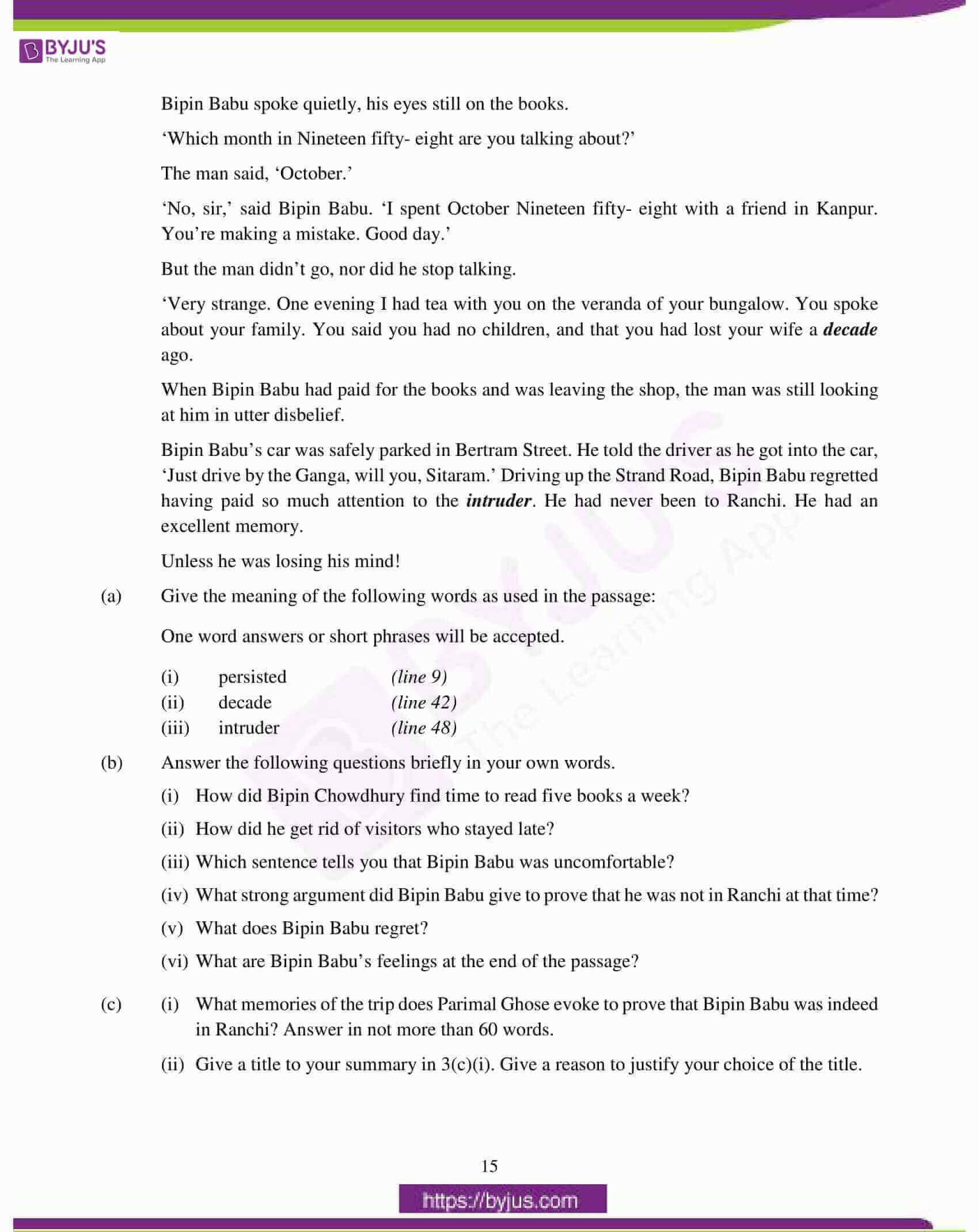 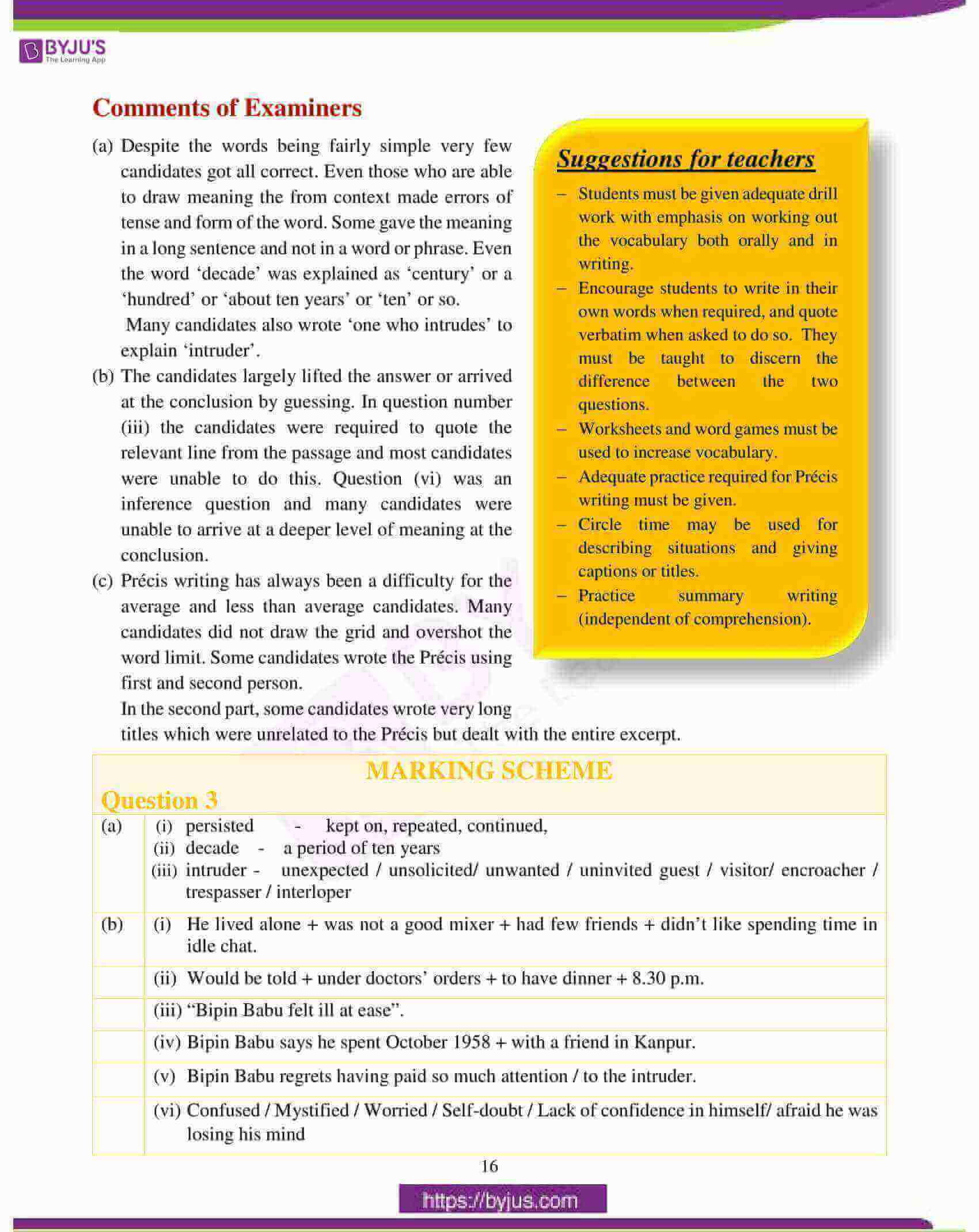 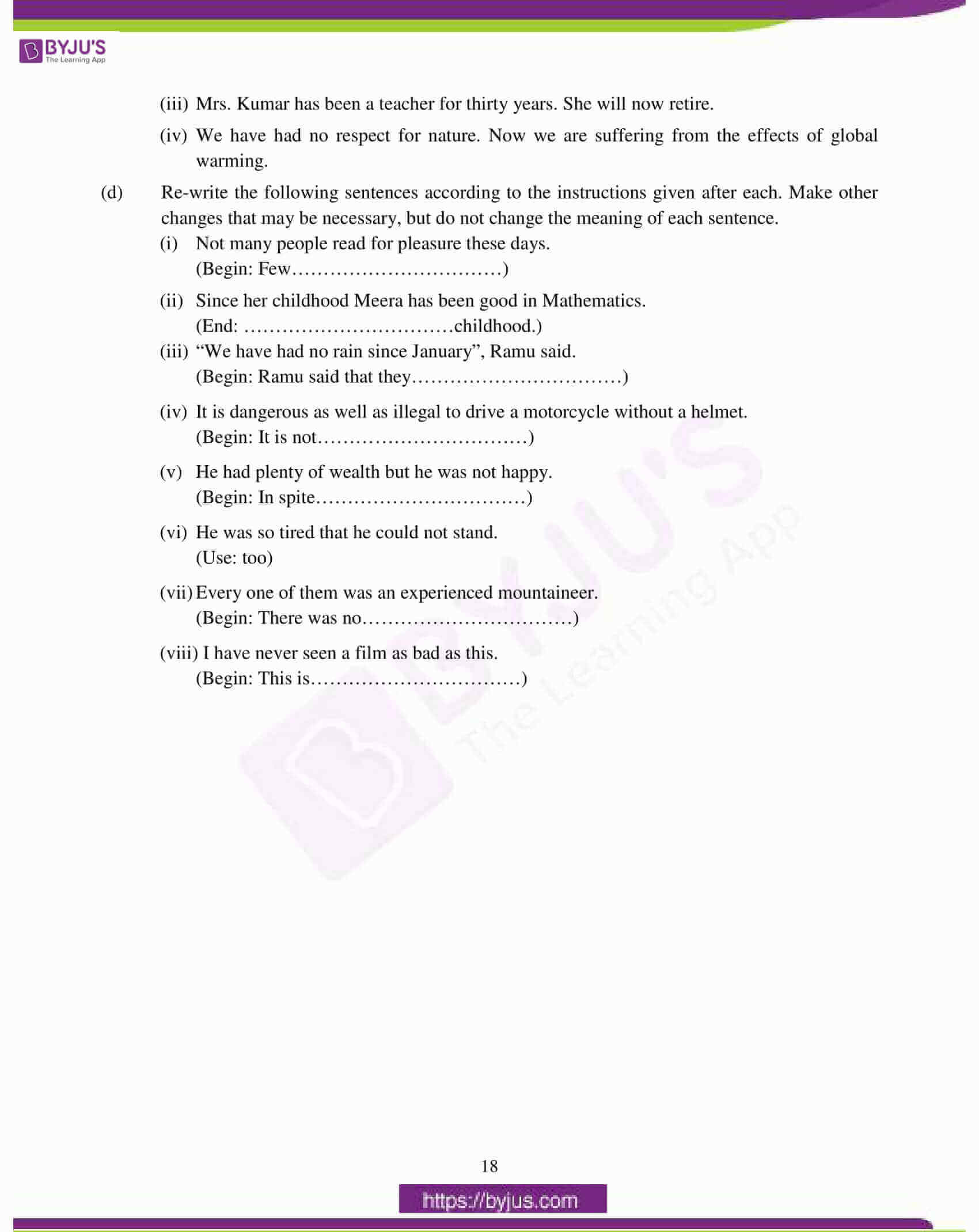 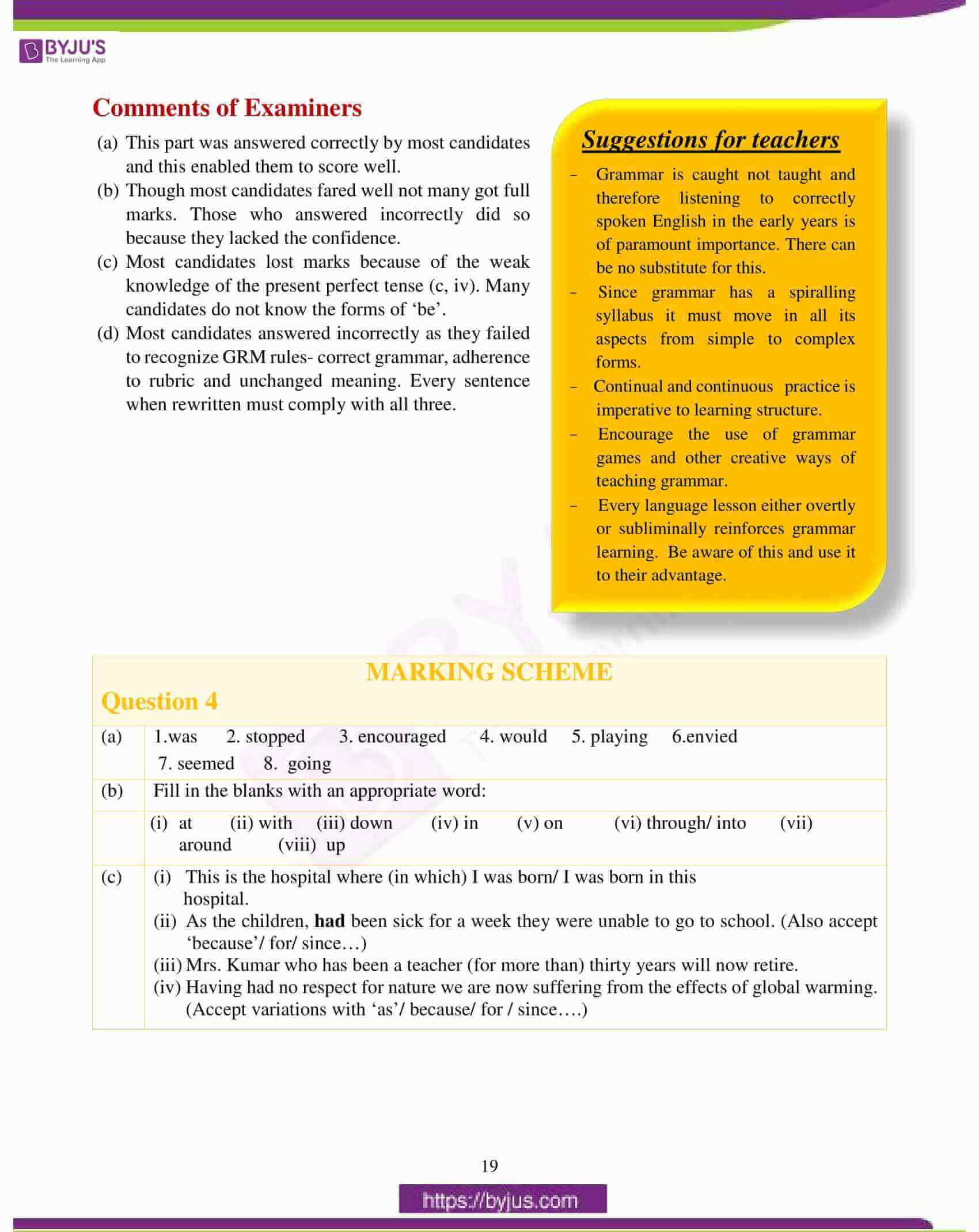 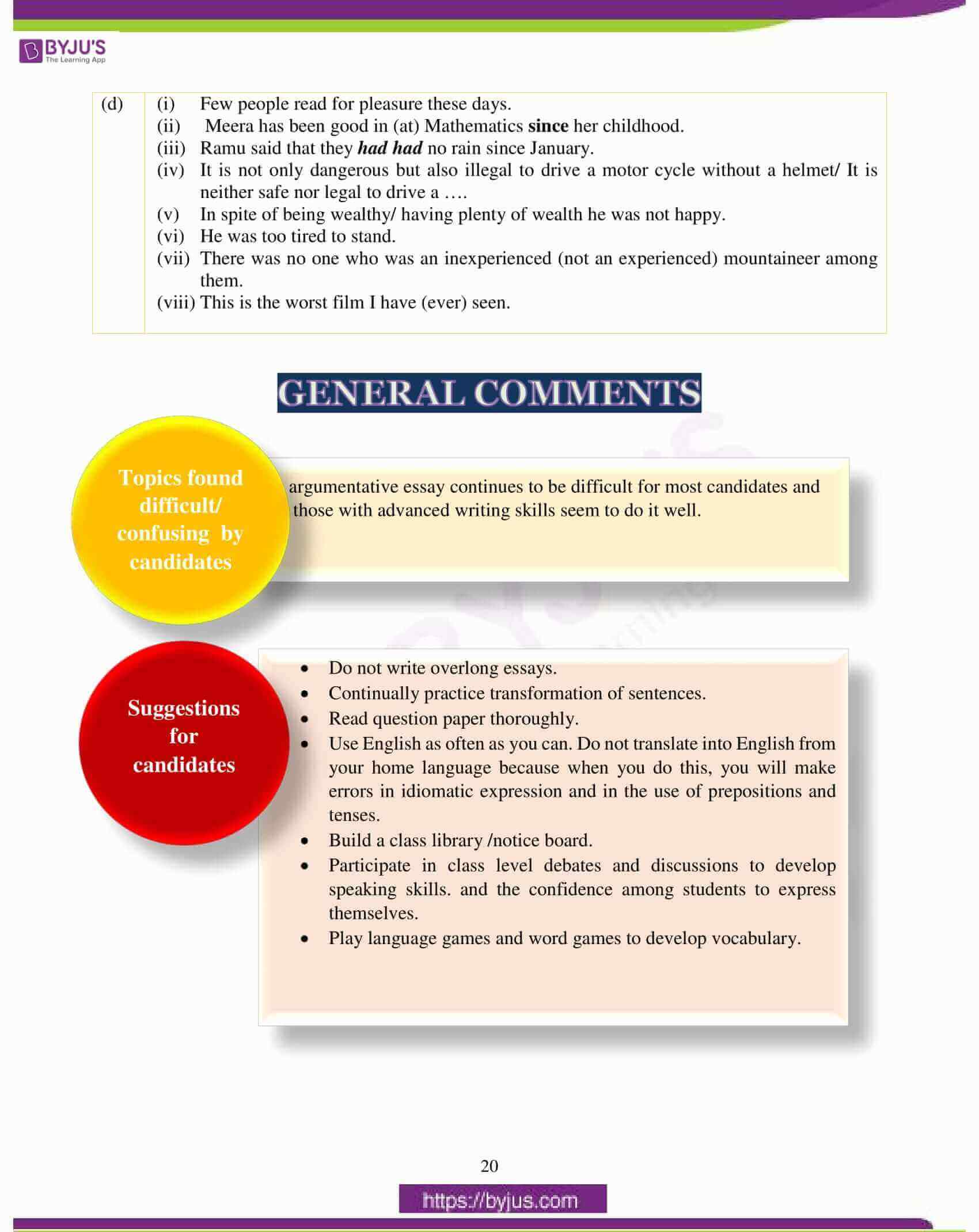 (a) Write an original short story that begins with the words: “It was raining hard that night. In my hurry to get into the house, I didn’t notice the black car parked across the road. I realized something was wrong when……….”.

(b) “School days are the happiest days of our lives.” Express your views either for or against this statement.

(c) Narrate an incident from your own experience when you helped a friend who was in trouble. Explain what happened. What did you do to make the situation better?

(d) There has been heavy rain in your city/town. You went to school but found that it was closed because of the rain. Describe the sights and sounds near the school and narrate how you finally reached home and spent the rest of the day.

(e) Study the picture given below. Write a story or a description or an account of what it suggests to you. Your composition may be about the subject of the picture or you may take suggestions from it; however, there must be a clear connection between the picture and your composition. 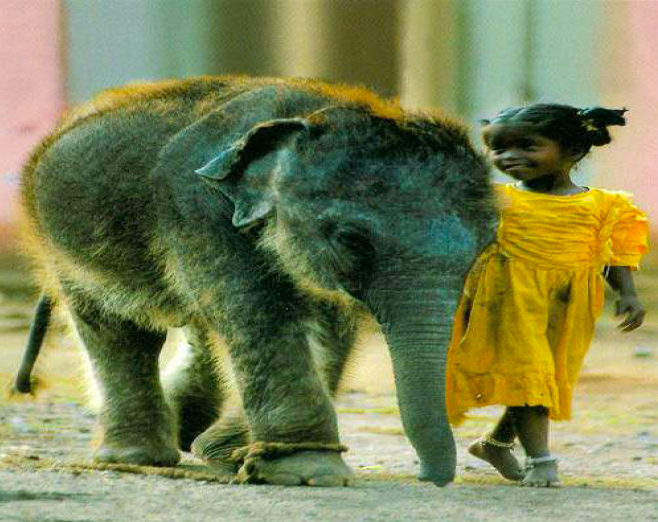 (a) The story must be original and must begin with the given sentence. The story may take any form but should convey the sequence of events following the narrator finding something amiss as he/ she approaches the front door of his/ her home.

(b) Views for or against the motion are to be accepted. Credit is to be given for a cohesive, well constructed, logical argument and ideas and reasoning based on personal experience. The child should take a clear stand and give valid reasons for whatever stand he takes regarding the topic either for or against the statement.

(c) The candidate must write from his/her own experience. There must be an account of the

problem and solution and stress on the role of the narrator in the resolution.

(d) A clear description of the rain, flooded streets, traffic etc. Also, the difficulty in getting to school and returning with a brief account of the rest of the day.

(e) Accept a wide interpretation. Any relevant ideas taken from the picture should be accepted and there must be a clear connection between the picture and the composition.

Question 2: Select any one of the following:

(a) A number of loose electric wires are hanging from a lamp post near the main gate of your school. Write a letter to the Municipal Commissioner explaining the problem, the danger it poses and suggest a quick solution.

(b) You were a part of an organizing committee for an inter-school event which was very successful. You and the other committee members were congratulated and praised at the school assembly by the Principal. Write a letter to your grandmother telling her about the event and your feelings at being recognized and praised in front of the school.

Location: Name of school/ proper postal address of the school

Question 3: Read the following passage carefully and answer the questions that follow:

Every Monday, on his way back from work, Bipin Chowdhury would drop in at New Market to buy books. He had to buy at least five at a time to last him through the week. He lived alone, was not a good mixer, had few friends, and didn’t like spending time in idle chat. Those who called in the evening got through their business quickly and left. Those who didn’t show signs

of leaving would be told around eight o’clock by Bipin Babu that he was under doctor’s orders to have dinner at eight-thirty. After dinner he would rest for half an hour and then turn in with

a book. This was a routine which had persisted unbroken for years.

Today, Bipin Babu had the feeling that someone was observing him from close quarters. He turned round and found himself looking at a round-faced, meek-looking man who now broke into a smile.

‘I don’t suppose you recognize me.’

Bipin Babu felt ill at ease. It didn’t seem that he had ever encountered this man before. The face seemed quite unfamiliar.

‘Have we met before?’ asked Bipin Babu.

The man looked greatly surprised. ‘We met every day for a whole week. I arranged for a car to take you to the Hudroo falls. My name is Parimal Ghose.’

Now Bipin Babu realized this man was making a mistake. Bipin Babu had never been to Ranchi. He smiled and said, ‘Do you know who I am?’

The man raised his eyebrows, and said, ‘Who doesn’t know Bipin Chowdhury?’

What are you saying, Mr. Chowdhury? You had a fall in Hudroo and cut your right knee. I brought you iodine. I had fixed up a car for you to go to Netarhat the next day, but you couldn’t because of the pain in the knee. Can’t you recall anything? Someone else you know was also in Ranchi at that time. Mr. Dinesh Mukherjee. You stayed in a bungalow. You said you didn’t like hotel food. I’ll tell you more: you always carried a bag with your books in it on your sightseeing trips. Am I right or not?’

Bipin Babu spoke quietly, his eyes still on the books.

‘Which month in Nineteen fifty- eight are you talking about?’

‘No, sir,’ said Bipin Babu. ‘I spent October Nineteen fifty- eight with a friend in Kanpur.

But the man didn’t go, nor did he stop talking.

‘Very strange. One evening I had tea with you on the veranda of your bungalow. You spoke

about your family. You said you had no children, and that you had lost your wife a decade ago.

When Bipin Babu had paid for the books and was leaving the shop, the man was still looking

at him in utter disbelief.

Bipin Babu’s car was safely parked in Bertram Street. He told the driver as he got into the car, ‘Just drive by the Ganga, will you, Sitaram.’ Driving up the Strand Road, Bipin Babu regretted

having paid so much attention to the intruder. He had never been to Ranchi. He had an excellent memory.

Unless he was losing his mind!

(a) Give the meaning of the following words as used in the passage:

One word answers or short phrases will be accepted.

(b) Answer the following questions briefly in your own words.

(i) How did Bipin Chowdhury find time to read five books a week?

(ii) How did he get rid of visitors who stayed late?

(iii) Which sentence tells you that Bipin Babu was uncomfortable?

(iv) What strong argument did Bipin Babu give to prove that he was not in Ranchi at that time?

(v) What does Bipin Babu regret?

(vi) What are Bipin Babu’s feelings at the end of the passage?

(c) (i) What memories of the trip does Parimal Ghose evoke to prove that Bipin Babu was indeed in Ranchi? Answer in not more than 60 words.

(ii) Give a title to your summary in 3(c)(i). Give a reason to justify your choice of the title.

(v) Bipin Babu regrets having paid so much attention / to the intruder.

4. Dinesh Mukherjee was also in Ranchi.

5. Bipin Babu had stayed in a bungalow.

7. Always carried a bag with books

8. Talked about family (wife had died, no children) (Any six)

(ii) Expression – Any suitable title dealing only with the précis.

(b) Fill in each blank with an appropriate word:

(i) This is the hospital. I was born here.

(ii) The children have been sick for a week. They were unable to go to school.

(i) This is the hospital. I was born here.

(ii) The children have been sick for a week. They were unable to go to school.

(iii) Mrs. Kumar has been a teacher for thirty years. She will now retire.

(iv) We have had no respect for nature. Now we are suffering from the effects of global warming.

(d) Rewrite the following sentences according to the instructions given after each. Make other changes that may be necessary, but do not change the meaning of each sentence.

(i) Not many people read for pleasure these days.

(ii) Since her childhood Meera has been good in Mathematics.

(iii) “We have had no rain since January”, Ramu said.

(iv) It is dangerous as well as illegal to drive a motorcycle without a helmet.

(v) He had plenty of wealth but he was not happy.

(vi) He was so tired that he could not stand.

(vii) Every one of them was an experienced mountaineer.

(viii) I have never seen a film as bad as this.

(b) Fill in the blanks with an appropriate word:

(c) (i) This is the hospital where (in which) I was born/ I was born in this hospital.

(ii) As the children, had been sick for a week they were unable to go to school. (Also accept

(iii) Mrs. Kumar who has been a teacher (for more than) thirty years will now retire.

(iv) Having had no respect for nature we are now suffering from the effects of global warming. (Accept variations with ‘as’/ because/ for / since….)

(d) (i) Few people read for pleasure these days.

(ii) Meera has been good in (at) Mathematics since her childhood.

(iii) Ramu said that they had had no rain since January.

(v) In spite of being wealthy/ having plenty of wealth he was not happy.

(vi) He was too tired to stand.

(vii) There was no one who was an inexperienced (not an experienced) mountaineer among them.

(viii) This is the worst film I have (ever) seen.

We hope ICSE Class 10 English Language Question Paper Solution 2017 must have helped students in their exam preparation. We have also compiled the solutions of other subjects of ICSE Class 10 Previous Years Question Papers at one place. Students can access them by clicking here. Stay tuned to BYJU’S for the latest update on ICSE/CBSE/State Boards/Competitive exams and don’t forget to download the BYJU’S App.