Students can have a look at the ICSE Class 10 English Question Paper Solution 2018 below: 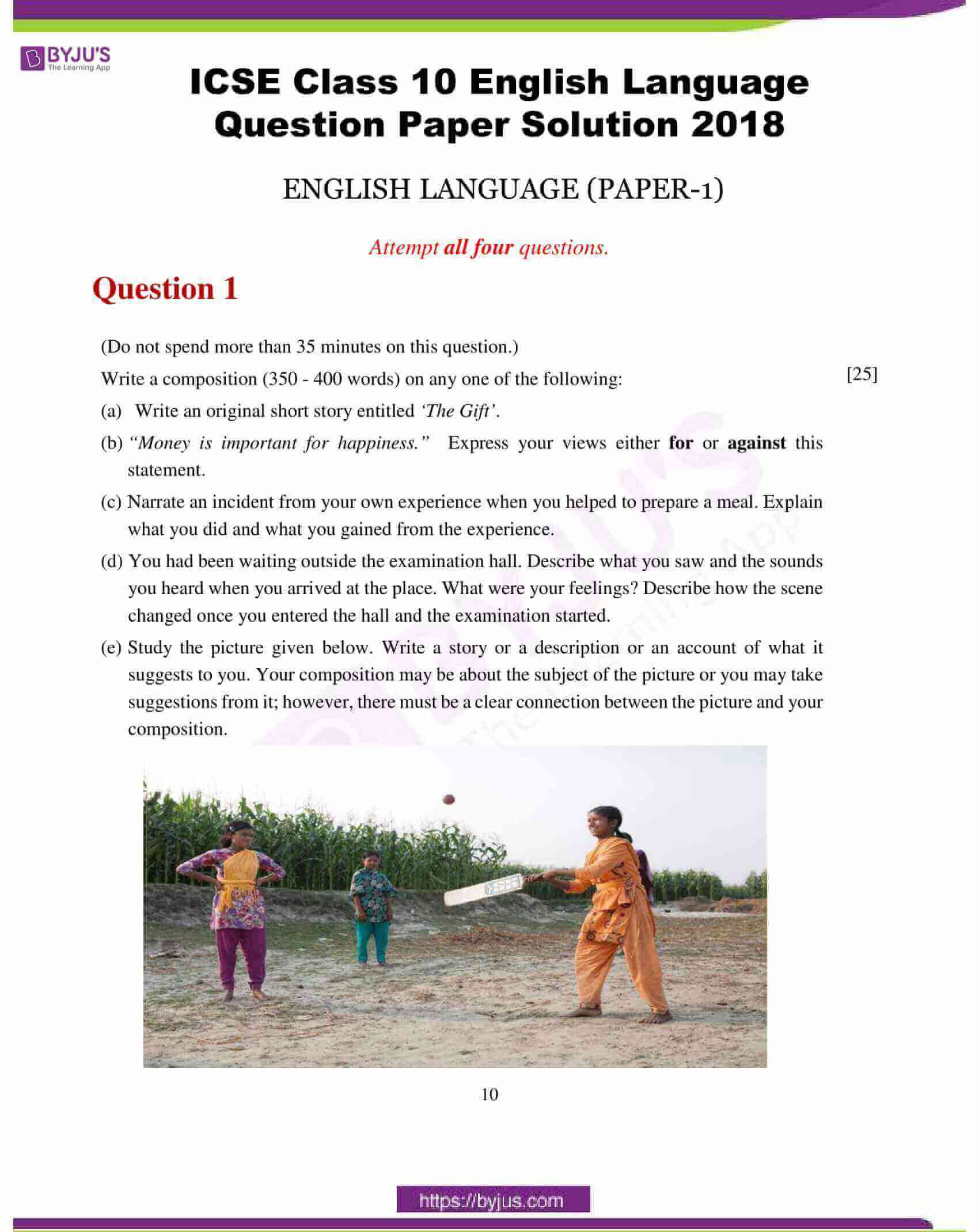 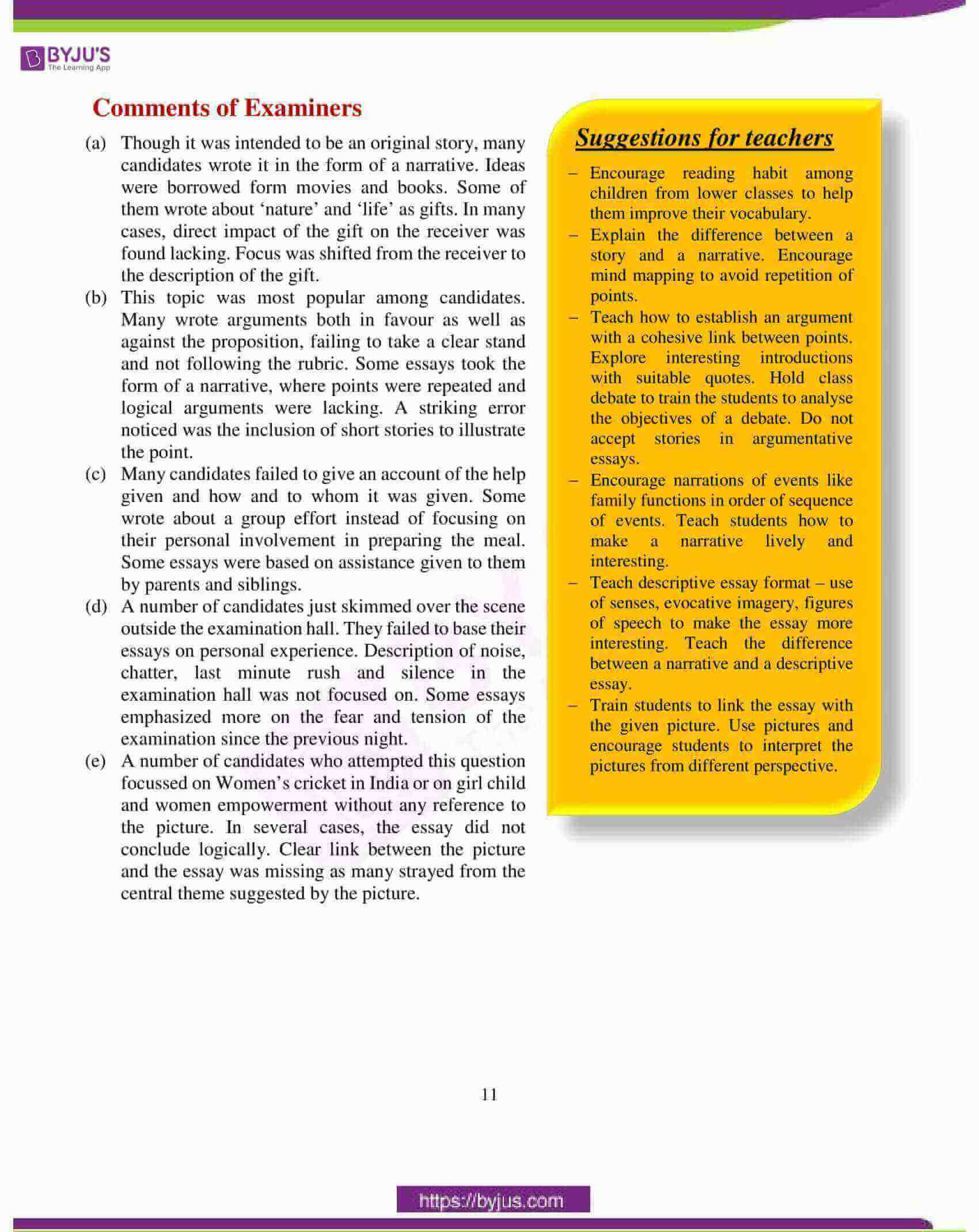 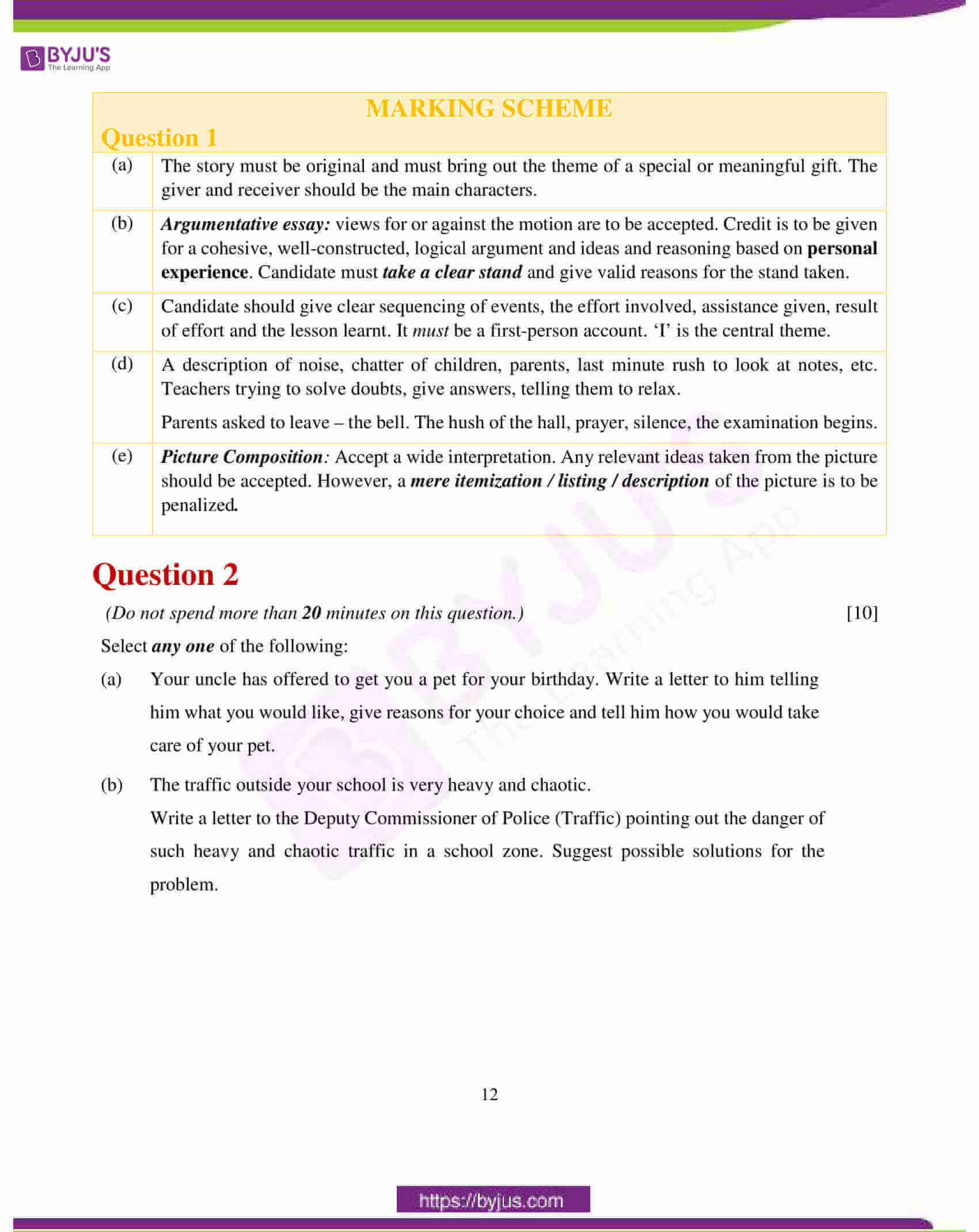 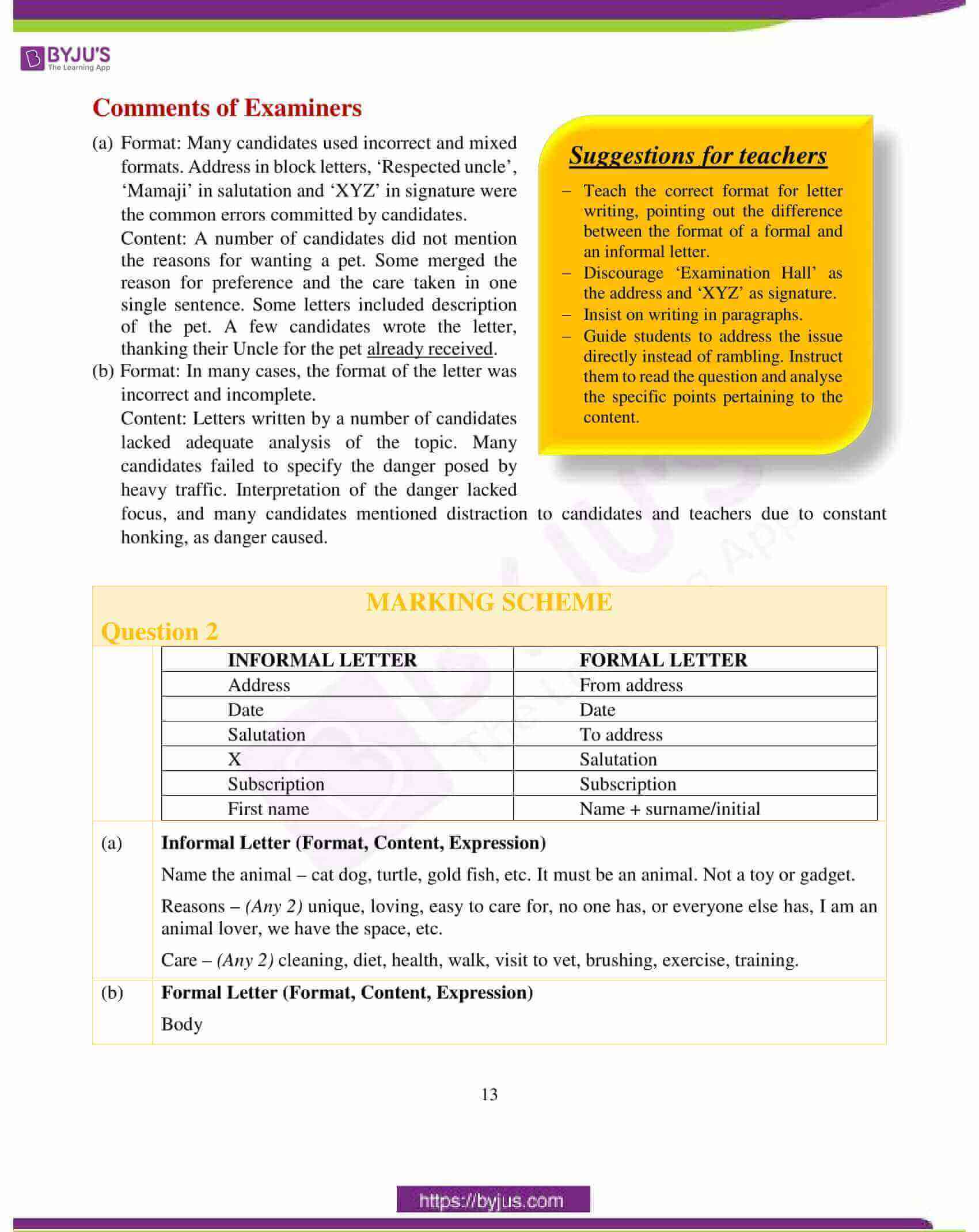 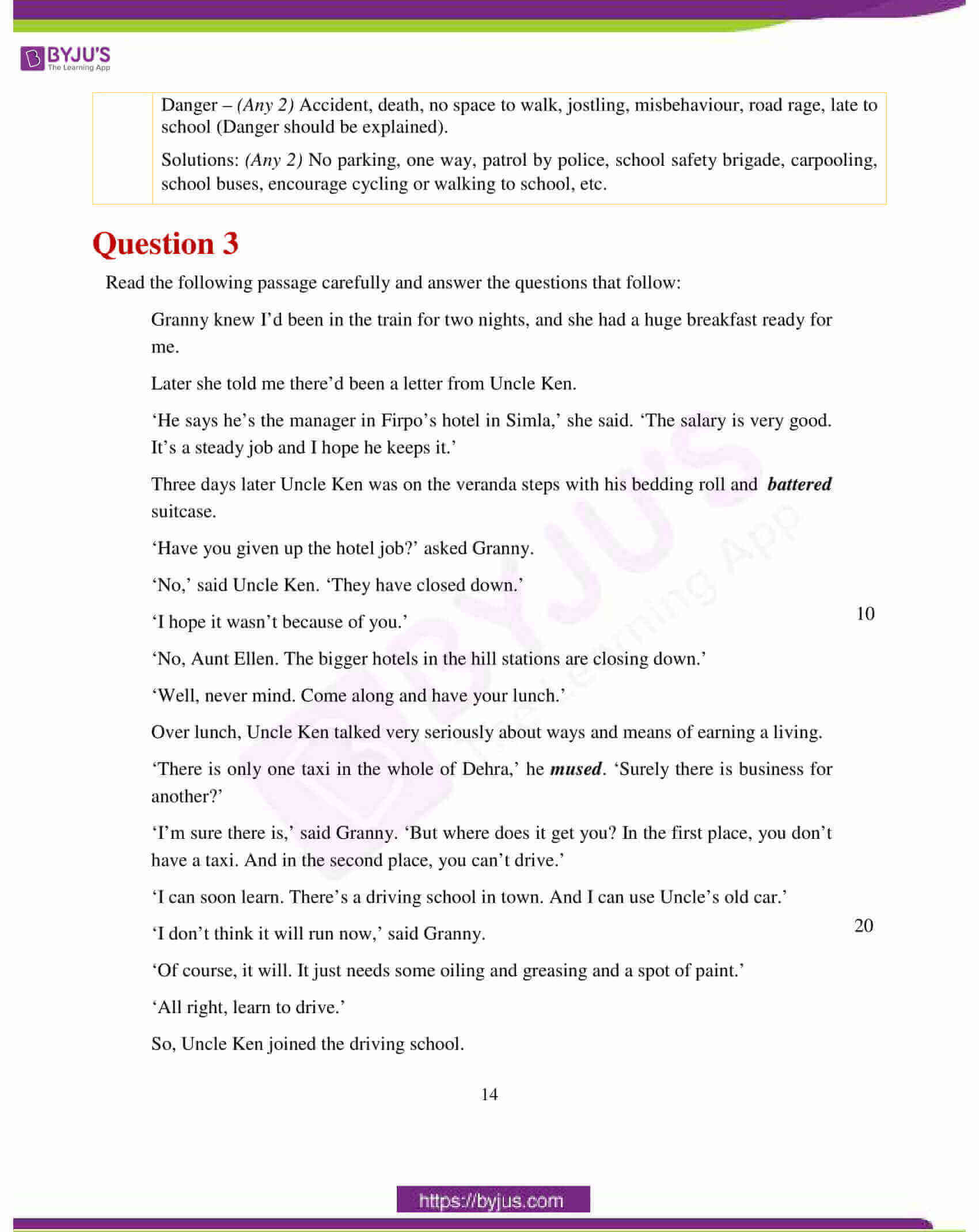 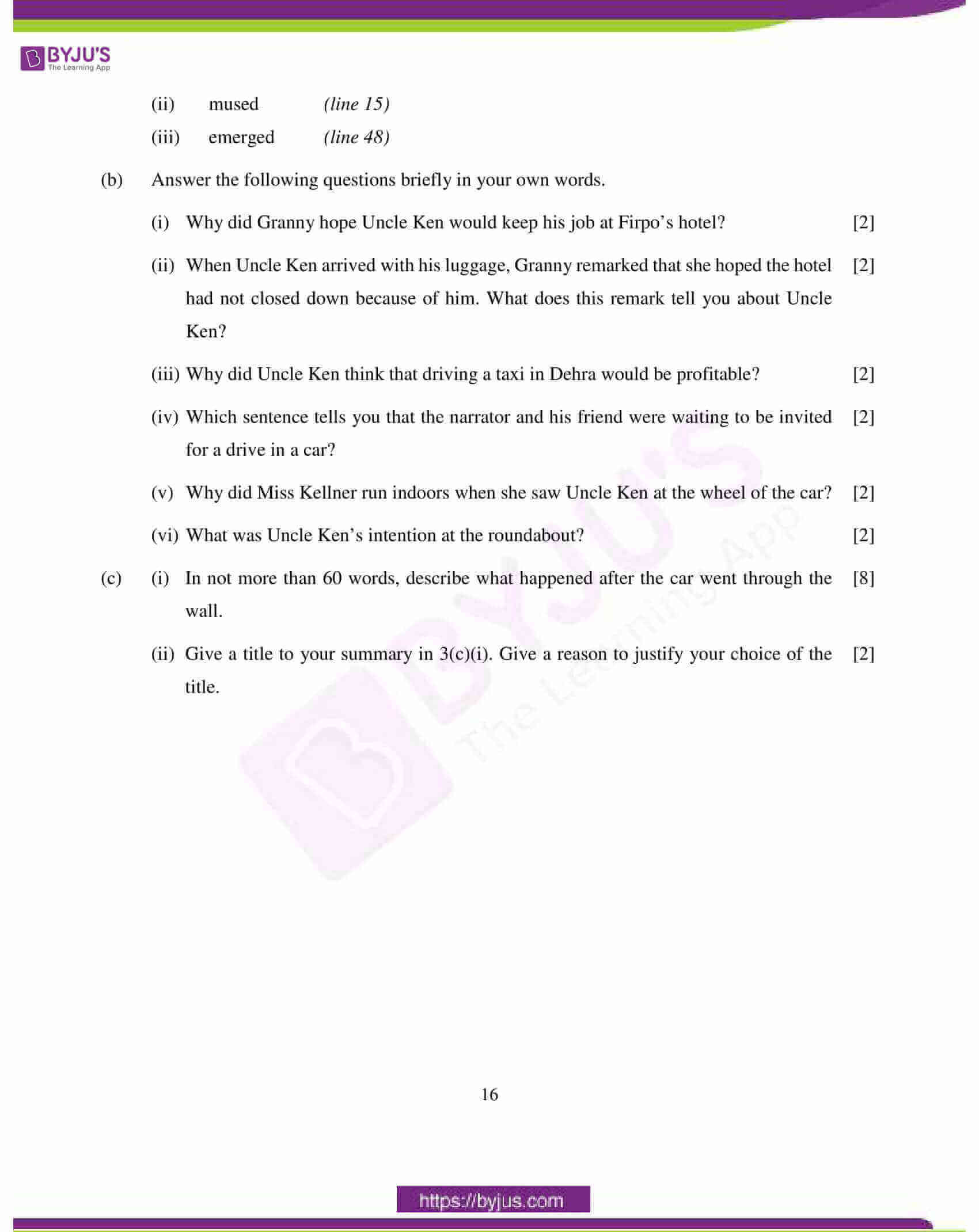 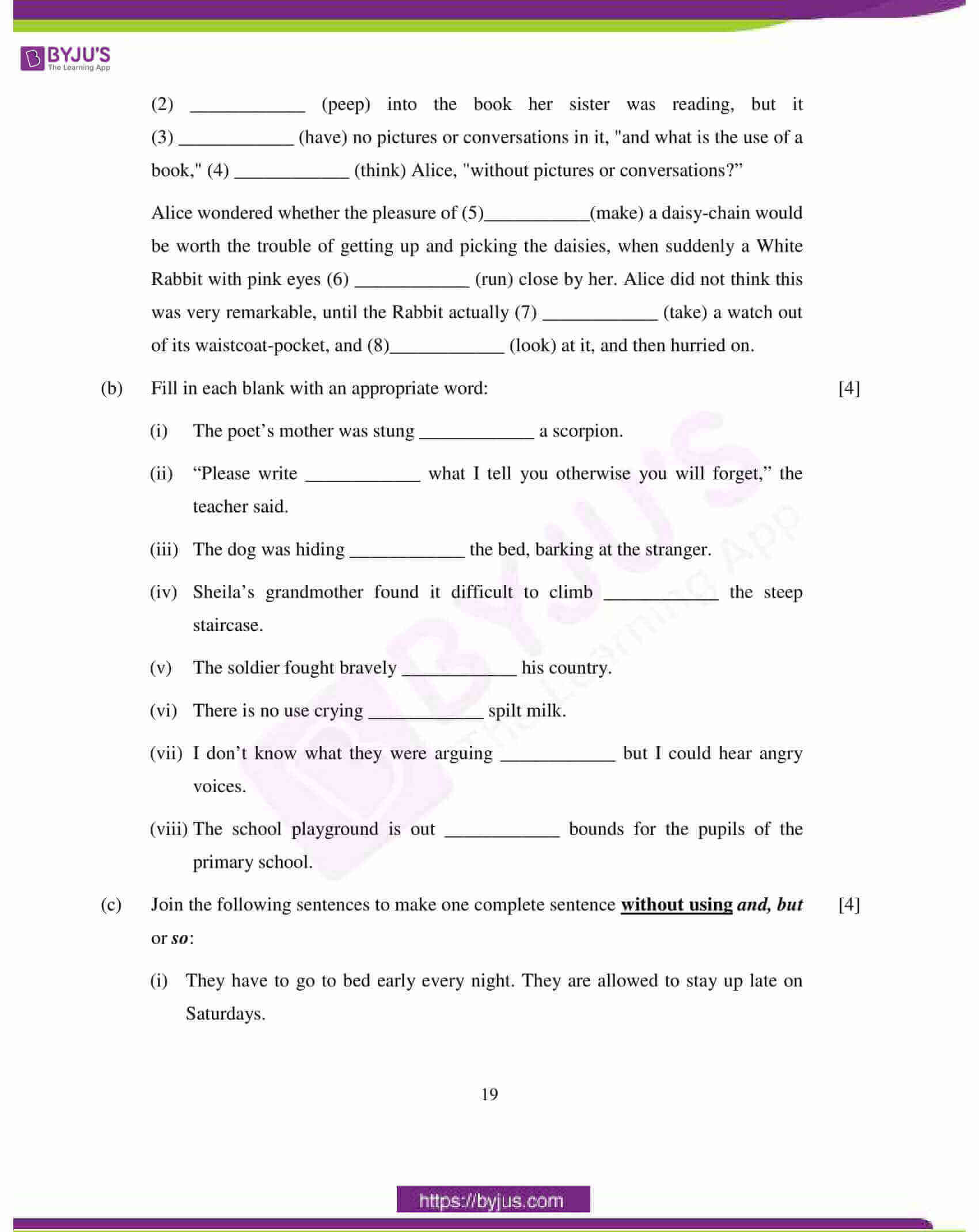 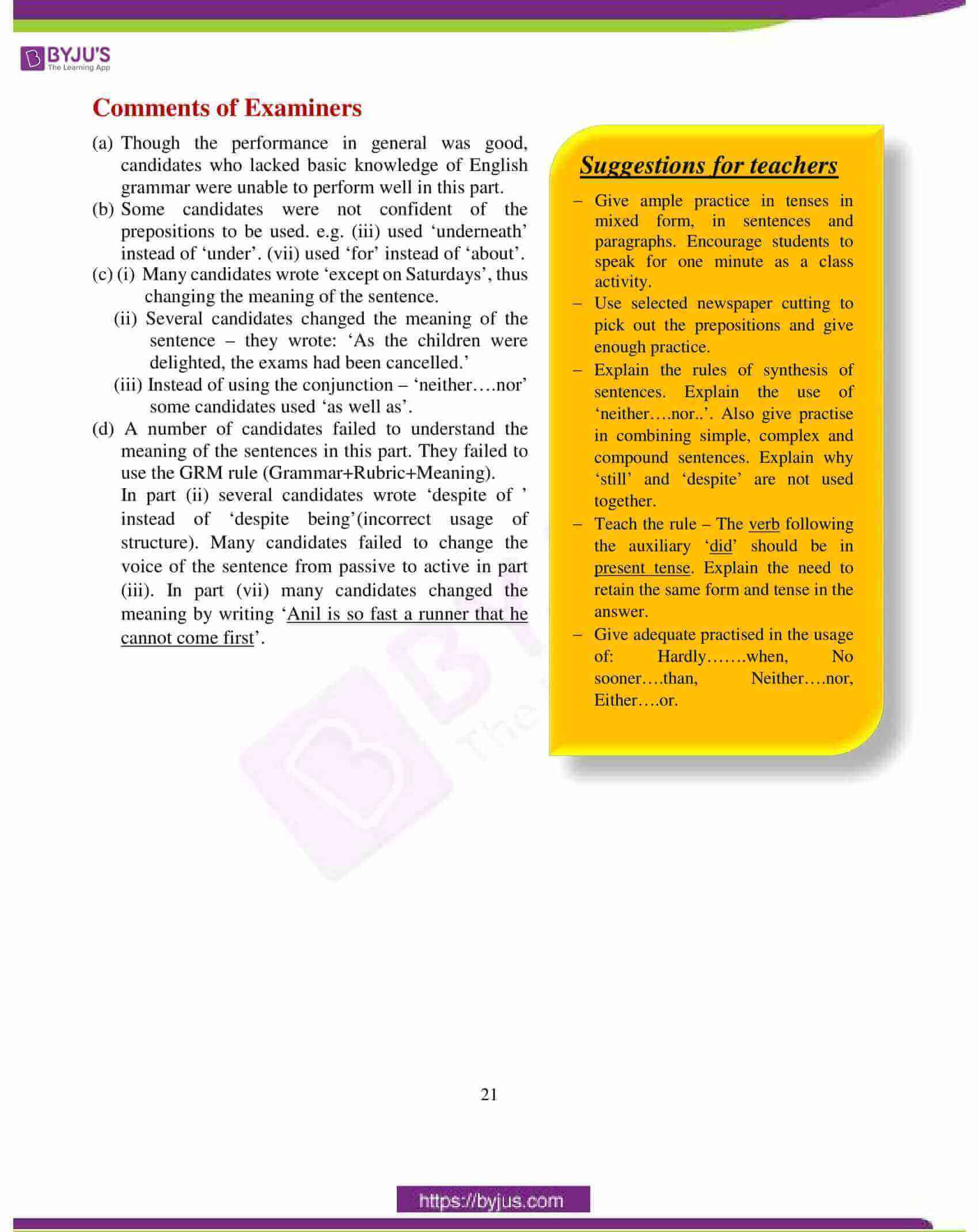 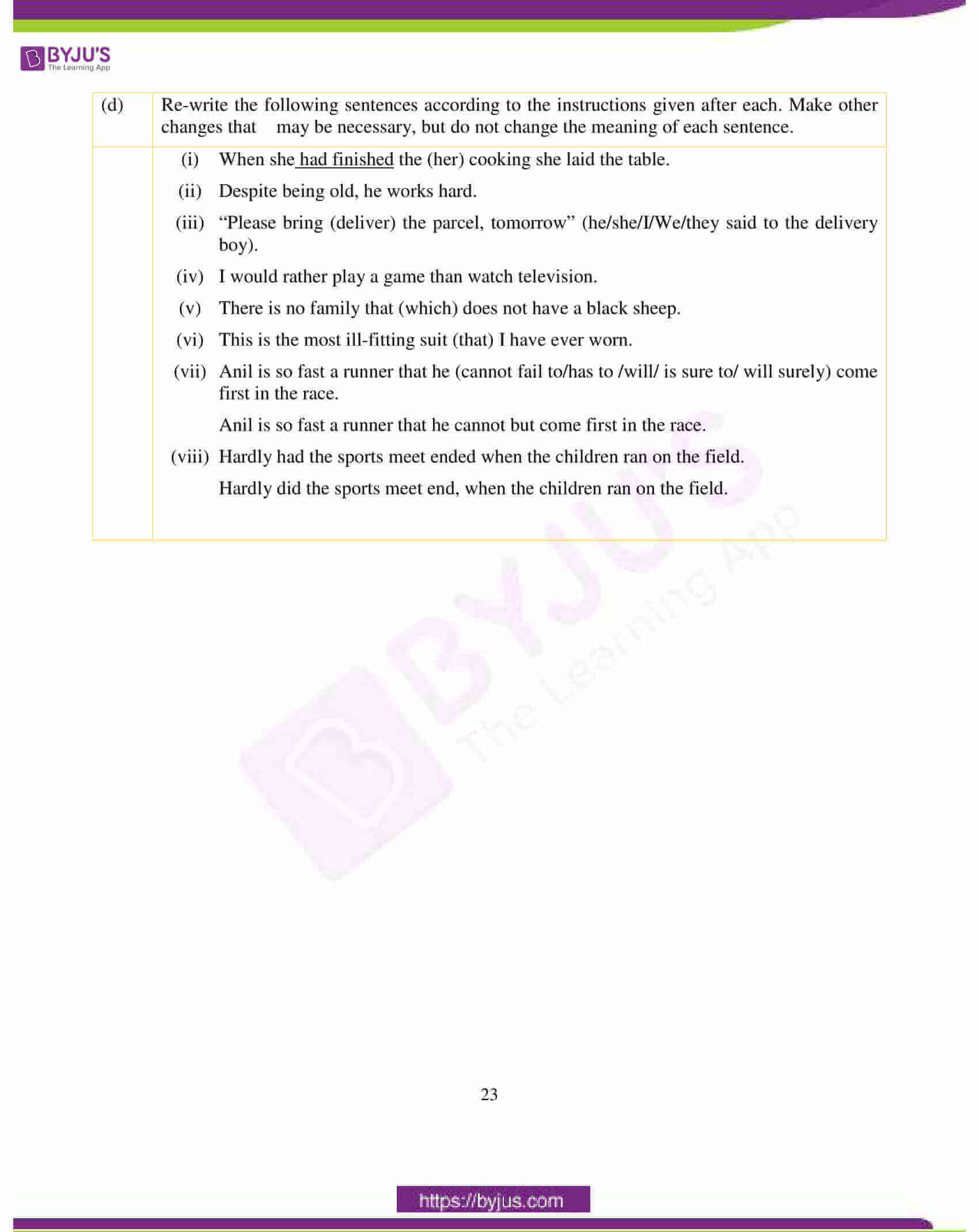 (a) Write an original short story entitled ‘The Gift’.

(b) “Money is important for happiness.” Express your views either for or against this statement.

(c) Narrate an incident from your own experience when you helped to prepare a meal. Explain what you did and what you gained from the experience.

(d) You had been waiting outside the examination hall. Describe what you saw and the sounds you heard when you arrived at the place. What were your feelings? Describe how the scene changed once you entered the hall and the examination started.

(e) Study the picture given below. Write a story or a description or an account of what it suggests to you. Your composition may be about the subject of the picture or you may take suggestions from it; however, there must be a clear connection between the picture and your composition. 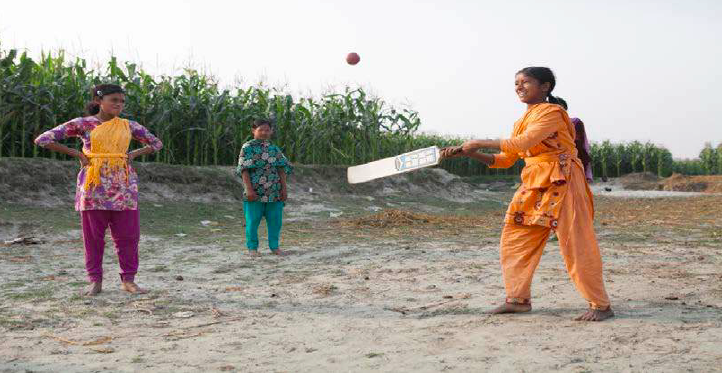 (a) The story must be original and must bring out the theme of a special or meaningful gift. The giver and receiver should be the main characters.

(b) Argumentative essay: views for or against the motion are to be accepted. Credit is to be given for a cohesive, well-constructed, logical argument and ideas and reasoning based on personal experience. Candidate must take a clear stand and give valid reasons for the stand taken.

(c) Candidate should give clear sequencing of events, the effort involved, assistance given, result of effort and the lesson learnt. It must be a first-person account. ‘I’ is the central theme.

Teachers trying to solve doubts, give answers, telling them to relax.

Parents asked to leave – the bell. The hush of the hall, prayer, silence, the examination begins.

(e) Picture Composition: Accept a wide interpretation. Any relevant ideas taken from the picture should be accepted. However, a mere itemization / listing / description of the picture is to be penalized.

Question 2: Select any one of the following:

(a) Your uncle has offered to get you a pet for your birthday. Write a letter to him telling him what you would like, give reasons for your choice and tell him how you would take care of your pet.

(b) The traffic outside your school is very heavy and chaotic.

Write a letter to the Deputy Commissioner of Police (Traffic) pointing out the danger of such heavy and chaotic traffic in a school zone. Suggest possible solutions for the problem.

Name the animal – cat dog, turtle, gold fish, etc. It must be an animal. Not a toy or gadget.

Reasons – unique, loving, easy to care for, no one has, or everyone else has, I am an

animal lover, we have the space, etc.

school (Danger should be explained).

Question 3: Read the following passage carefully and answer the questions that follow:

Granny knew I’d been in the train for two nights, and she had a huge breakfast ready for me.

Later she told me there’d been a letter from Uncle Ken.

‘He says he’s the manager in Firpo’s hotel in Simla,’ she said. ‘The salary is very good.

It’s a steady job and I hope he keeps it.’

‘Have you given up the hotel job?’ asked Granny.

‘I hope it wasn’t because of you.’

‘No, Aunt Ellen. The bigger hotels in the hill stations are closing down.’

‘Well, never mind. Come along and have your lunch.’

Over lunch, Uncle Ken talked very seriously about ways and means of earning a living.

‘There is only one taxi in the whole of Dehra,’ he mused. ‘Surely there is business for another?’

‘I’m sure there is,’ said Granny. ‘But where does it get you? In the first place, you don’t

have a taxi. And in the second place, you can’t drive.’

‘I can soon learn. There’s a driving school in town. And I can use Uncle’s old car.’

‘I don’t think it will run now,’ said Granny.

‘Of course, it will. It just needs some oiling and greasing and a spot of paint.’

‘All right, learn to drive.’

out for a trial run.

‘You haven’t got your license yet,’ said Granny.

He spent all morning cleaning up the car. Granny gave him money for a can of petrol.

After tea, Uncle Ken said, ‘Come along, Ruskin, hop in and I will give you a ride. Bring Mohan along too.’ Mohan and I needed no urging. We got into the car beside Uncle Ken.

‘Now don’t go too fast, Ken,’ said Granny anxiously. ‘You are not used to the car as yet.’

Uncle Ken nodded and smiled and gave two sharp toots on the horn. He was feeling pleased with himself.

Driving through the gate, he nearly ran over a cat.

Miss Kellner, coming out for her evening rickshaw ride, saw Uncle Ken at the wheel of the car and ran indoors again.

Uncle Ken drove straight and fast, tootling the horn without a break.

At the end of the road there was a roundabout.

instead he went on – and straight through the Maharaja of Jetpur’s garden wall.

It was a single-brick wall, and the car knocked it down and emerged on the other side without any damage to the car or any of its occupants. Uncle Ken brought it to a halt in the middle of the Maharaja’s lawn.

Running across the grass came the Maharaja himself. When he saw that it was Uncle Ken at the wheel, the Maharaja beamed with pleasure.

‘Delighted to see you, old chap!’ he exclaimed. ‘Jolly decent of you to drop in again. How about a game of tennis?’

(a) Give the meaning of the following words as used in the passage:

One word answers or short phrases will be accepted.

(b) Answer the following questions briefly in your own words.

(i) Why did Granny hope Uncle Ken would keep his job at Firpo’s hotel?

(ii) When Uncle Ken arrived with his luggage, Granny remarked that she hoped the hotel

had not closed down because of him. What does this remark tell you about Uncle Ken?

(iii) Why did Uncle Ken think that driving a taxi in Dehra would be profitable?

(iv) Which sentence tells you that the narrator and his friend were waiting to be invited for a drive in a car?

(v) Why did Miss Kellner run indoors when she saw Uncle Ken at the wheel of the car?

(vi) What was Uncle Ken’s intention at the roundabout?

(c) (i) In not more than 60 words, describe what happened after the car went through the wall.

(ii) Give a title to your summary in 3(c)(i). Give a reason to justify your choice of the title.

(a) Give the meaning of the following words as used in the passage. One-word answers or short phrases will be accepted (meaning should be in the same tense).

(i) battered – damaged, broken, worn out

(ii) This is a critical thinking question – plausible answers to be accepted.

eccentric (implied meaning to be accepted).

(iii) There was only one taxi in Dehra+ (room for another one/ the need was there for another) (any one given in bracket to be accepted).

(iv) “Mohan and I needed no urging.” (Whole sentence to be quoted exactly.)

(v) She was frightened / rash driving / speed / knew Uncle Ken to be an irresponsible driver. (Any two)

(vi) He wanted to turn around + (return home/ drive back/ go back) (Any one in bracket to be accepted).

2. Emerged on the other side.

4. Maharaja runs to greet them.

6. Invites Ken for a tennis game.

(ii) Any apt title to be accepted (for Precis)

Justification for choice of the title.

(b) Fill in each blank with an appropriate word:

(c) Join the following sentences to make one complete sentence without using and, but

(i) They have to go to bed early every night. They are allowed to stay up late on

(ii) The children were delighted. The exams had been cancelled.

(iv) This is the place. The dog was rescued from its cruel owner.

(d) Re-write the following sentences according to the instructions given after each. Make

other changes that may be necessary, but do not change the meaning of each sentence.

(iii) The delivery boy was requested to bring the parcel the next day. (Rewrite using direct speech)

(b) Fill in the blanks with an appropriate word:

(d) Re-write the following sentences according to the instructions given after each. Make other changes that may be necessary, but do not change the meaning of each sentence.

(i) When she had finished the (her) cooking she laid the table.

(ii) Despite being old, he works hard.

(iv) I would rather play a game than watch television.

(v) There is no family that (which) does not have a black sheep.

(vi) This is the most ill-fitting suit (that) I have ever worn.

(vii) Anil is so fast a runner that he (cannot fail to/has to /will/ is sure to/ will surely) come first in the race.

Anil is so fast a runner that he cannot but come first in the race.

(viii) Hardly had the sports meet ended when the children ran on the field.

Hardly did the sports meet end, when the children ran on the field.

We hope students found this information on “ICSE Class 10 English Language Question Papers Solutions 2018” helpful for their exam preparation. They can also access solutions of other subjects of ICSE Class 10 Previous Years Question Papers by clicking here. Stay tuned to BYJU’S for the latest update on ICSE/CBSE/State Boards/Competitive exams. Also, download the BYJU’S App and fall in love with learning.