Students can have a look at the ICSE Class 10 English Literature Question Paper Solution 2018 below: 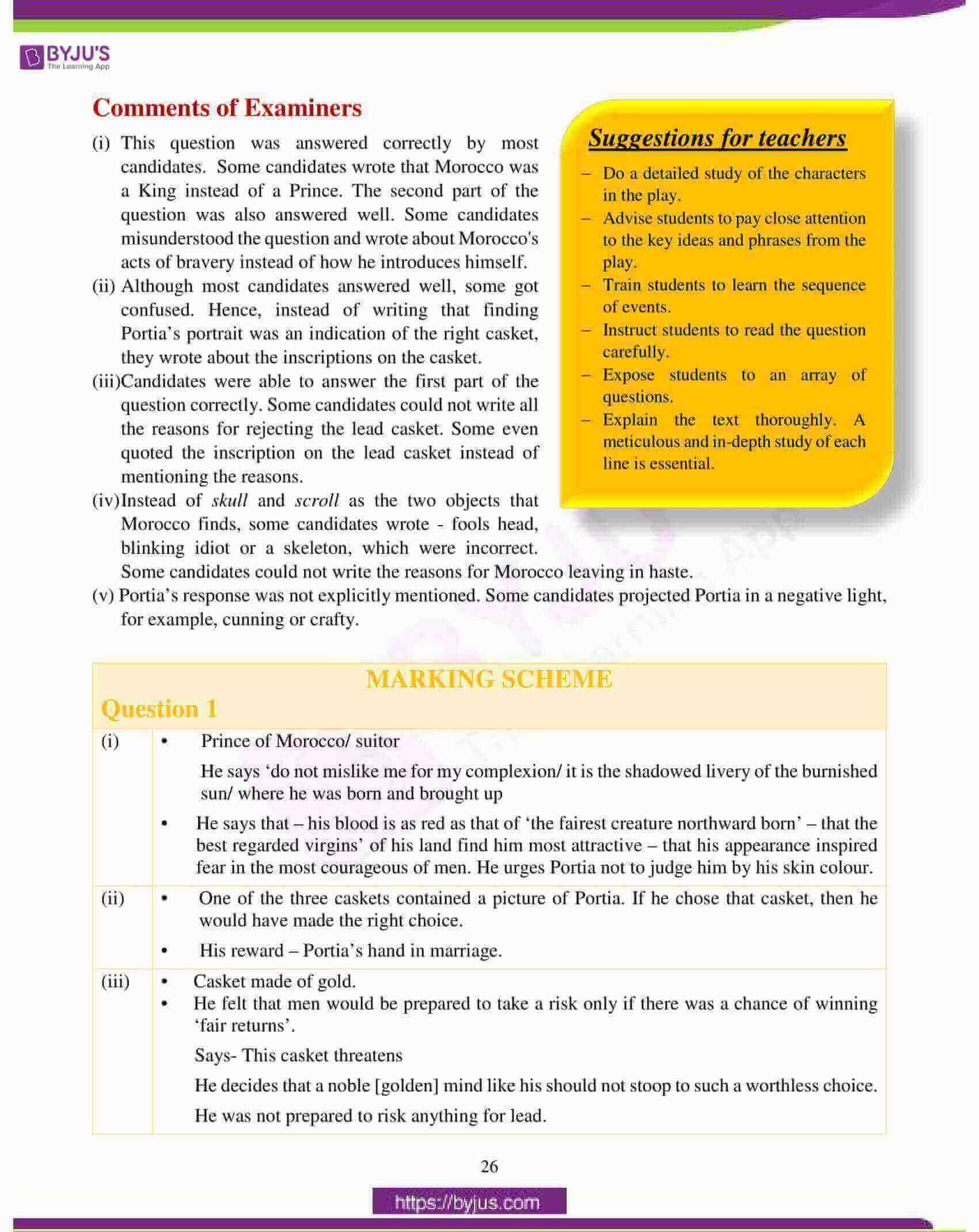 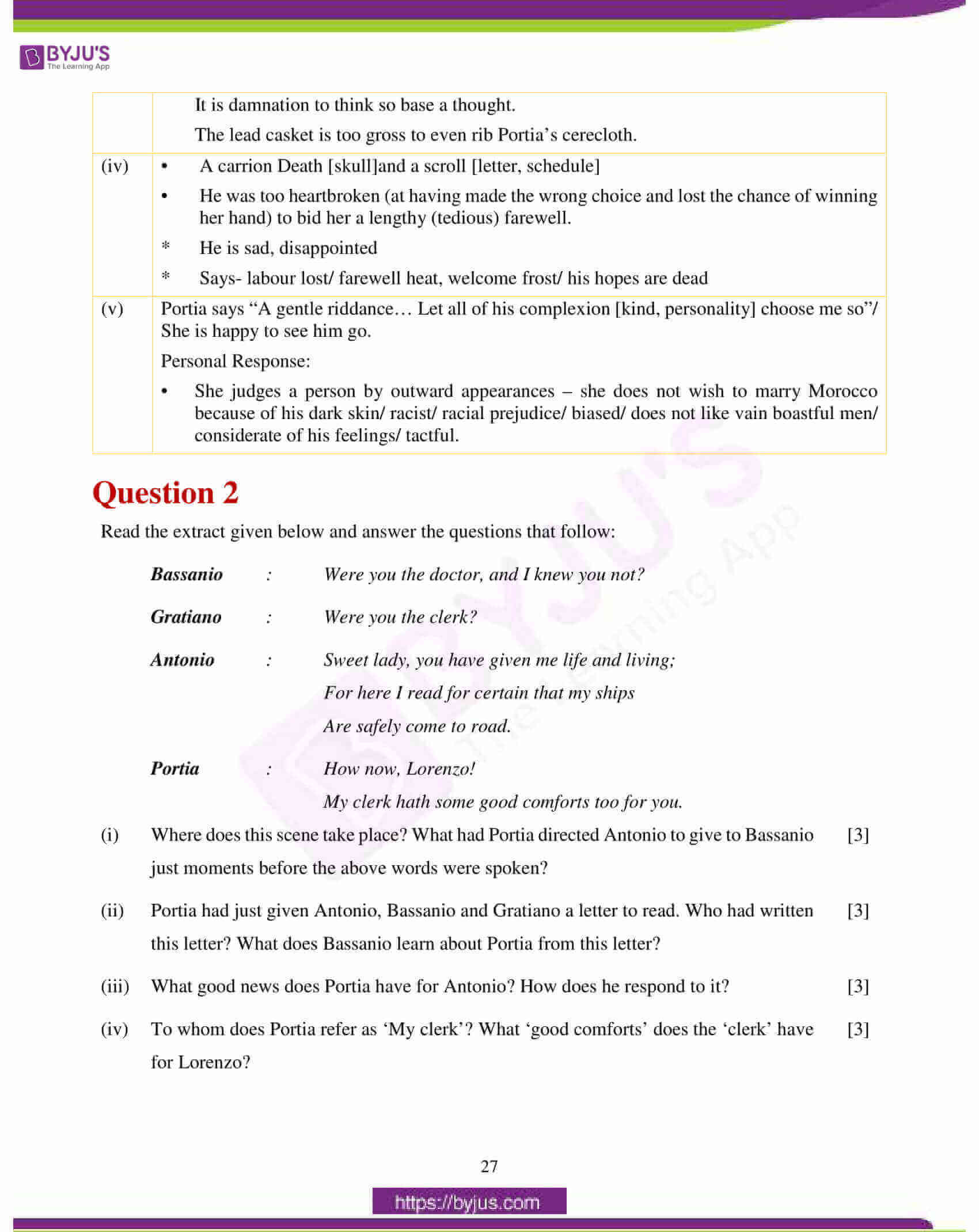 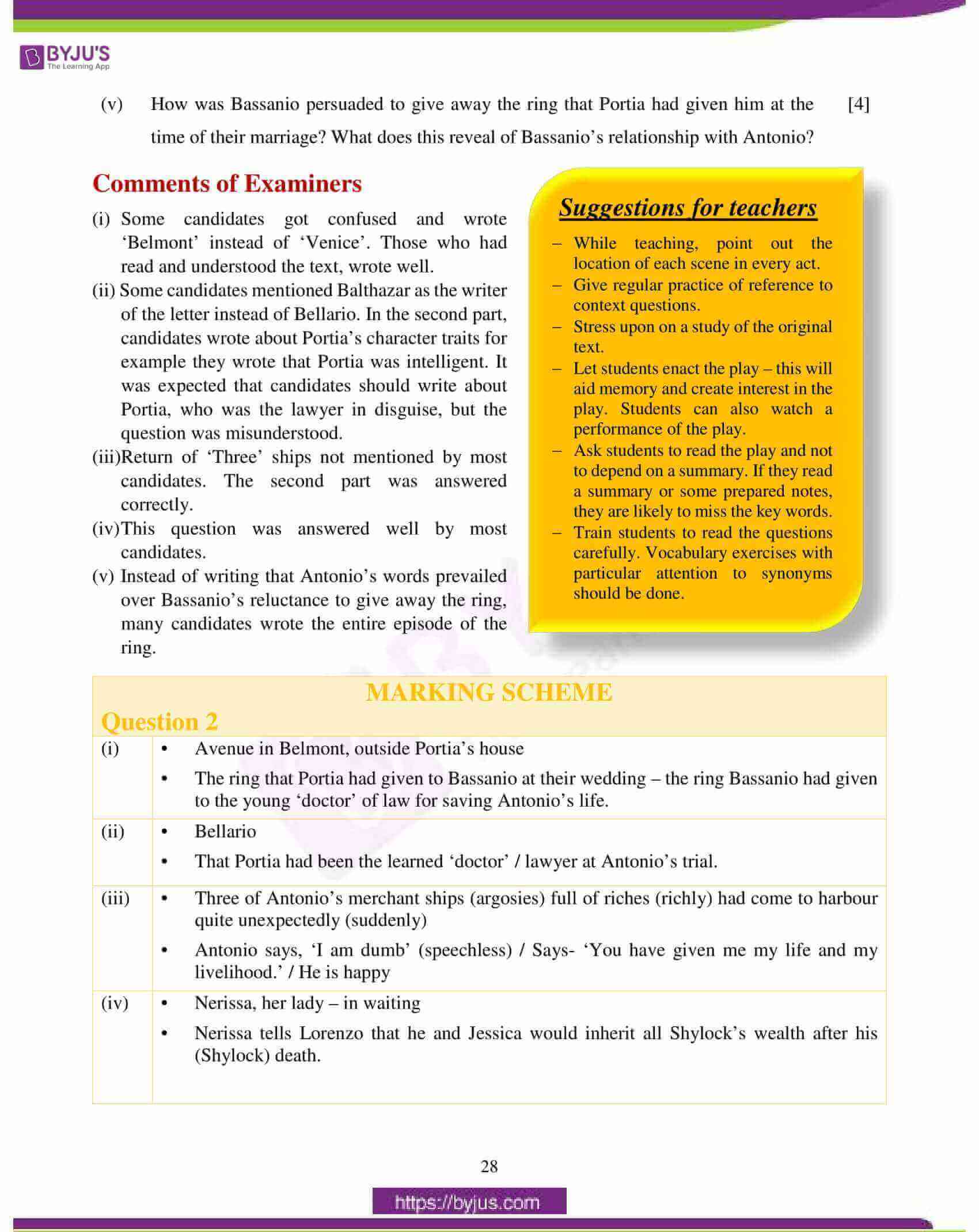 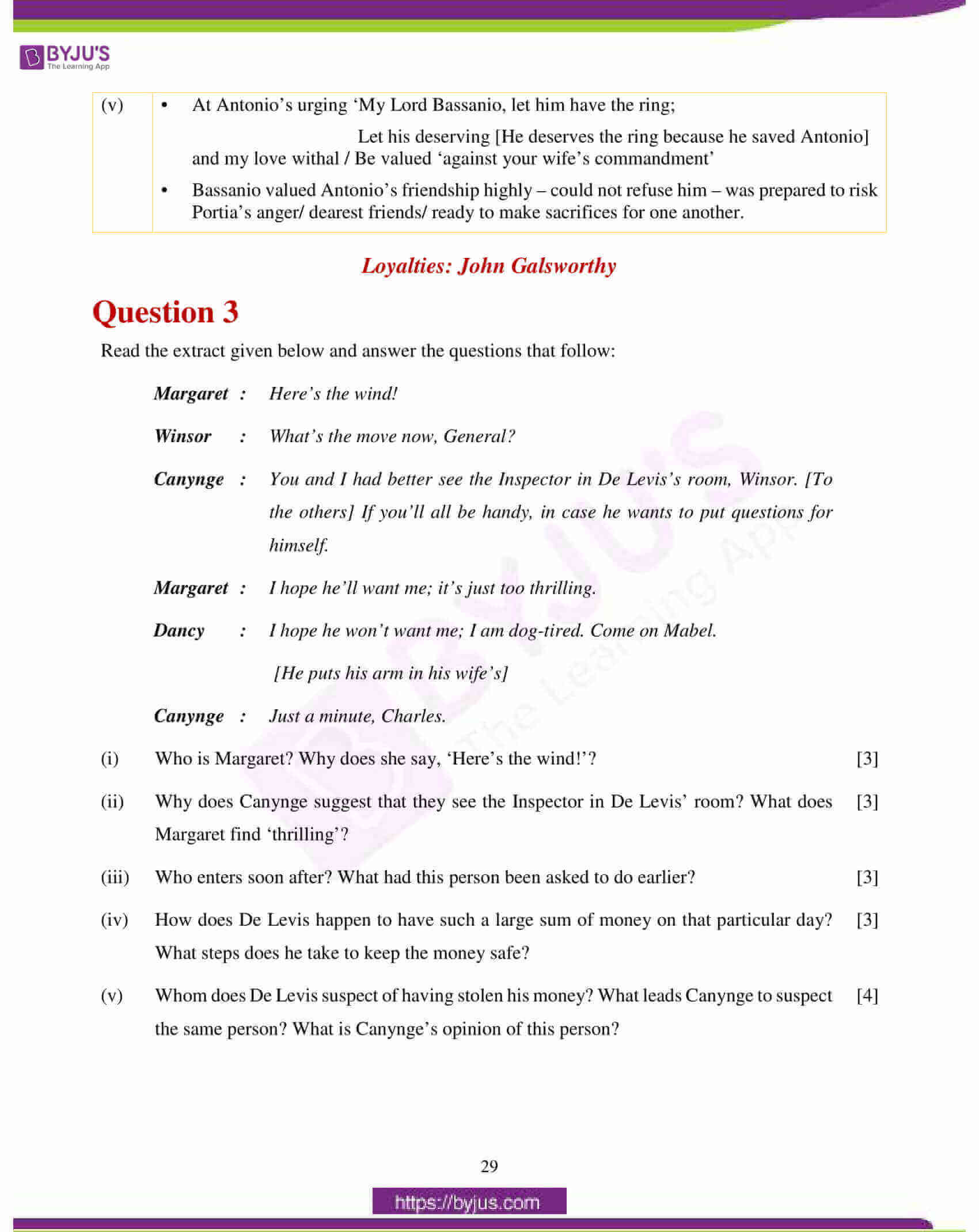 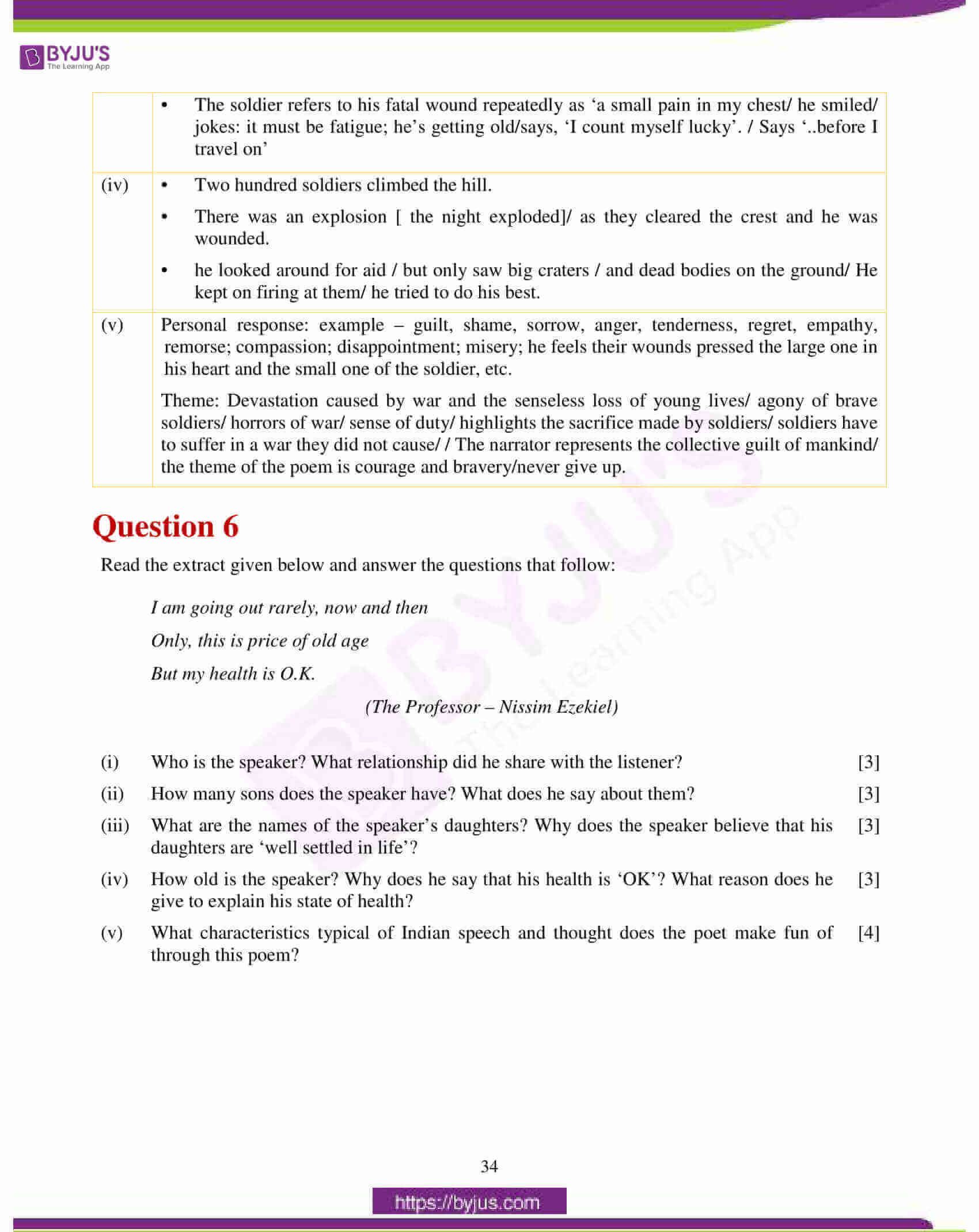 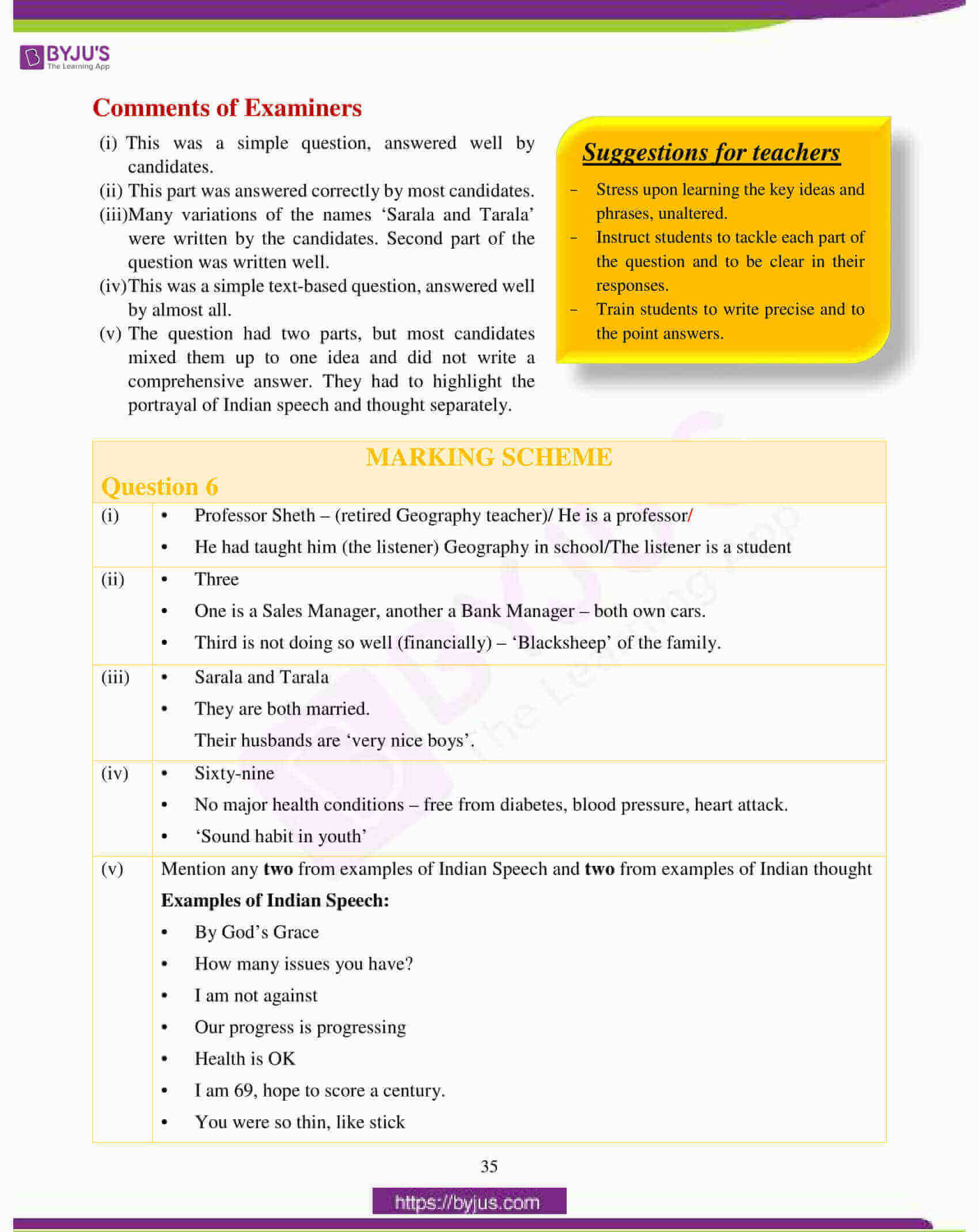 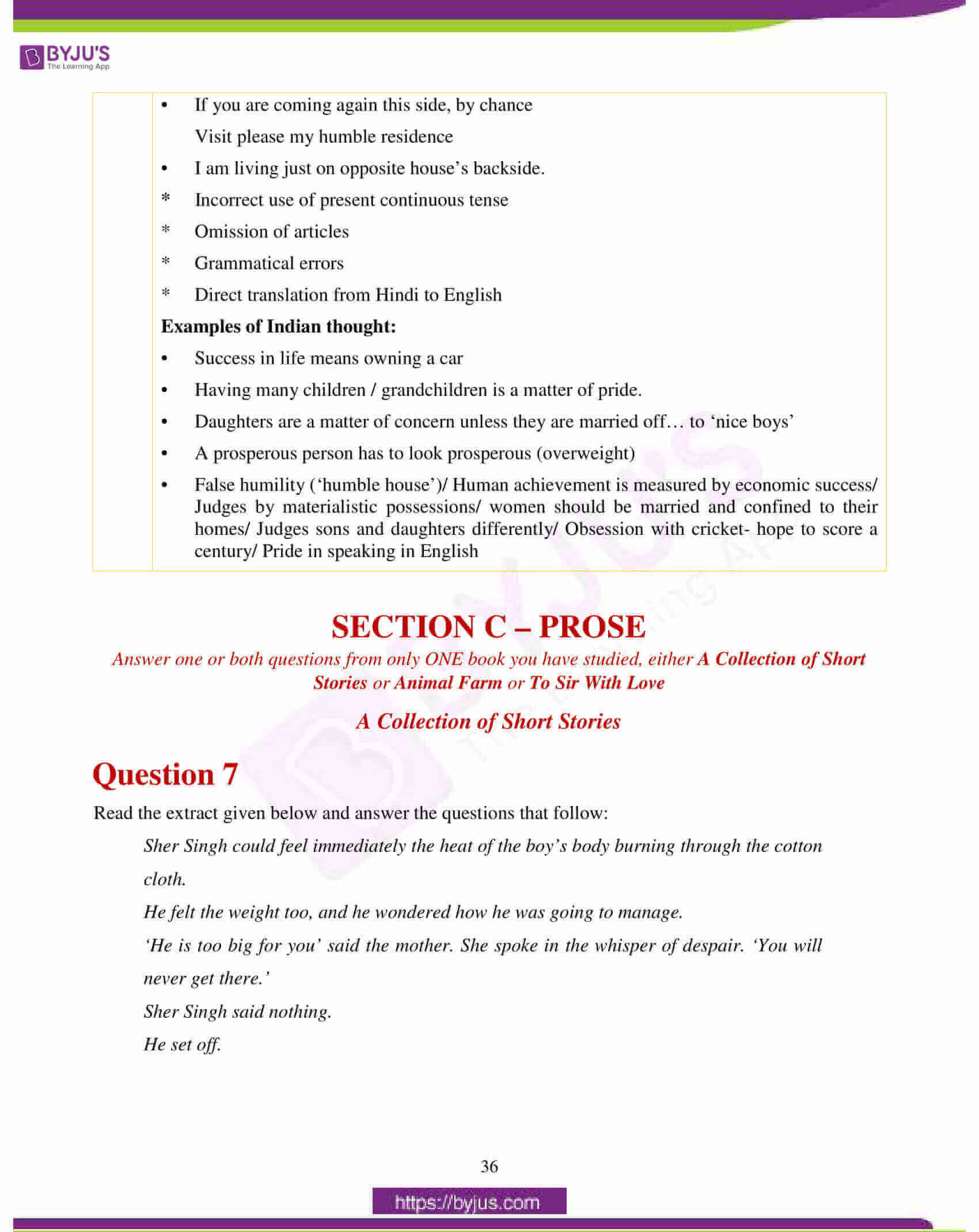 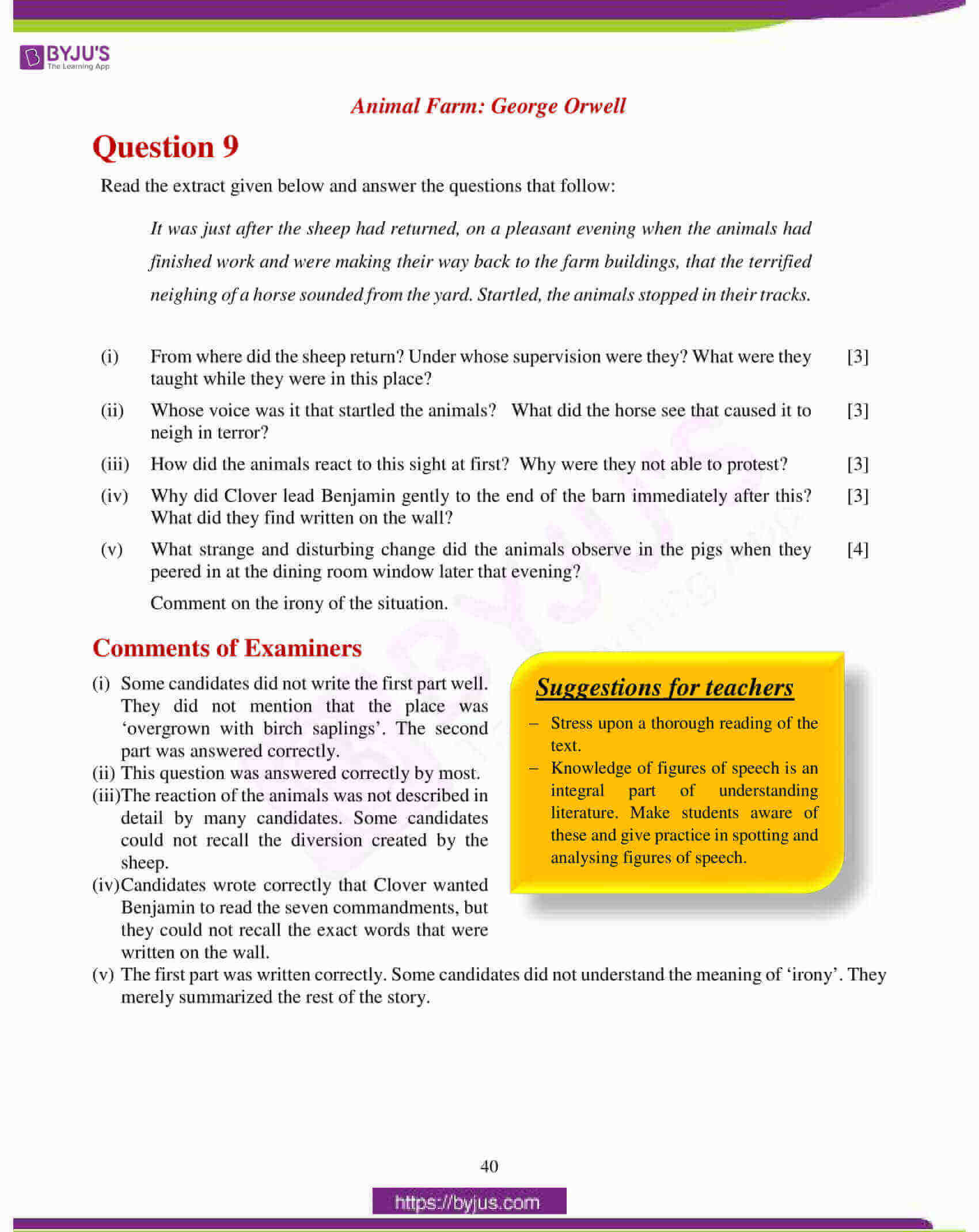 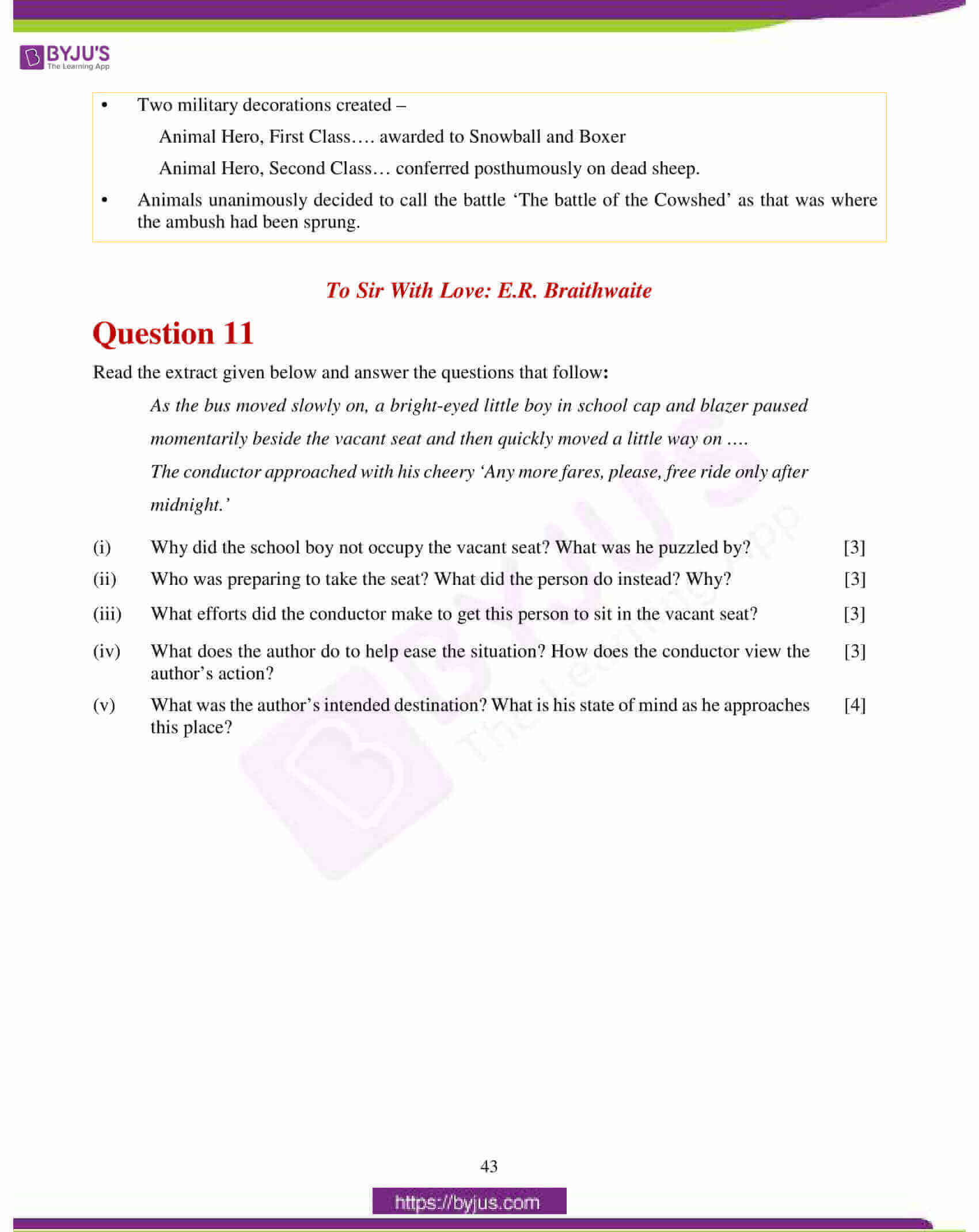 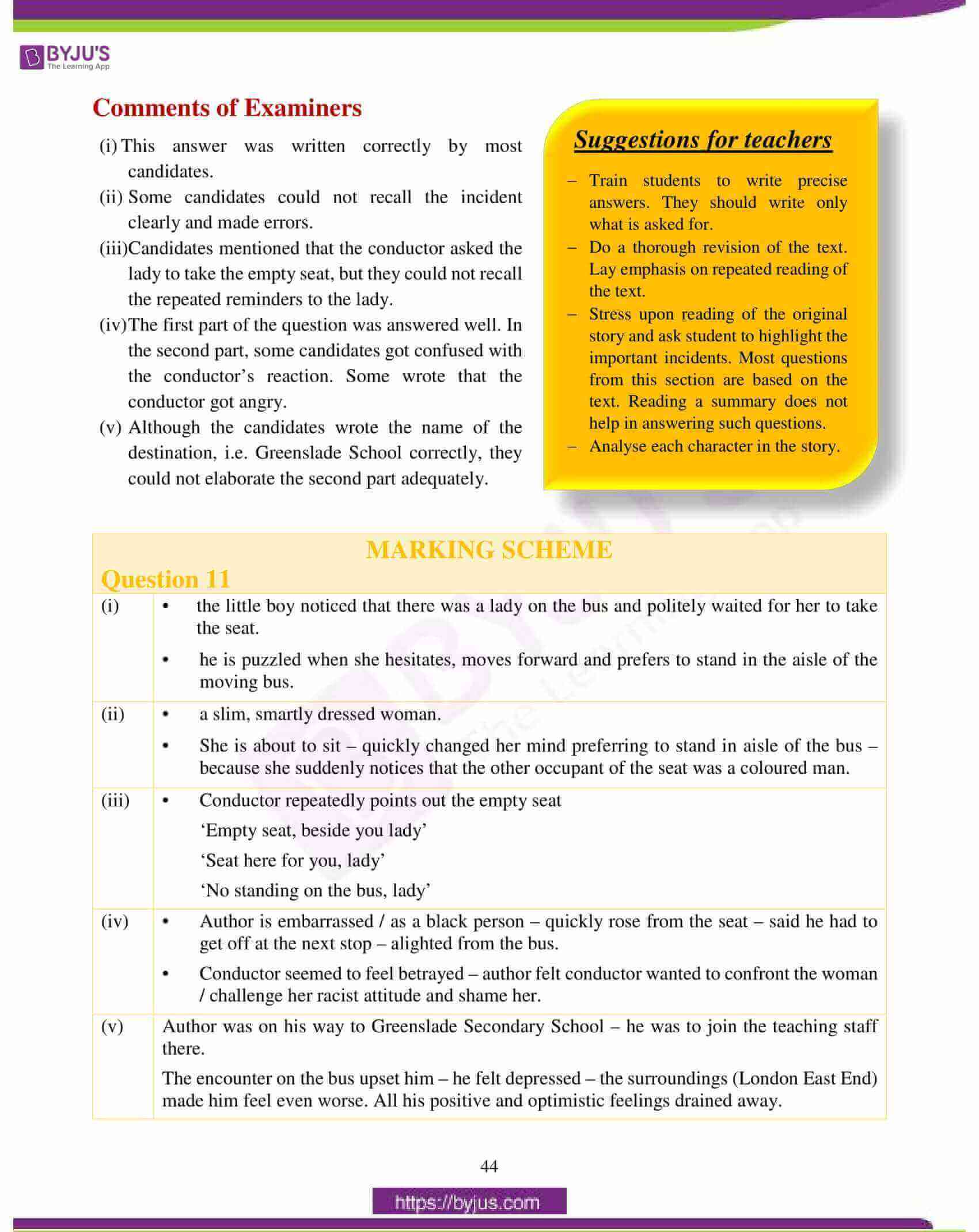 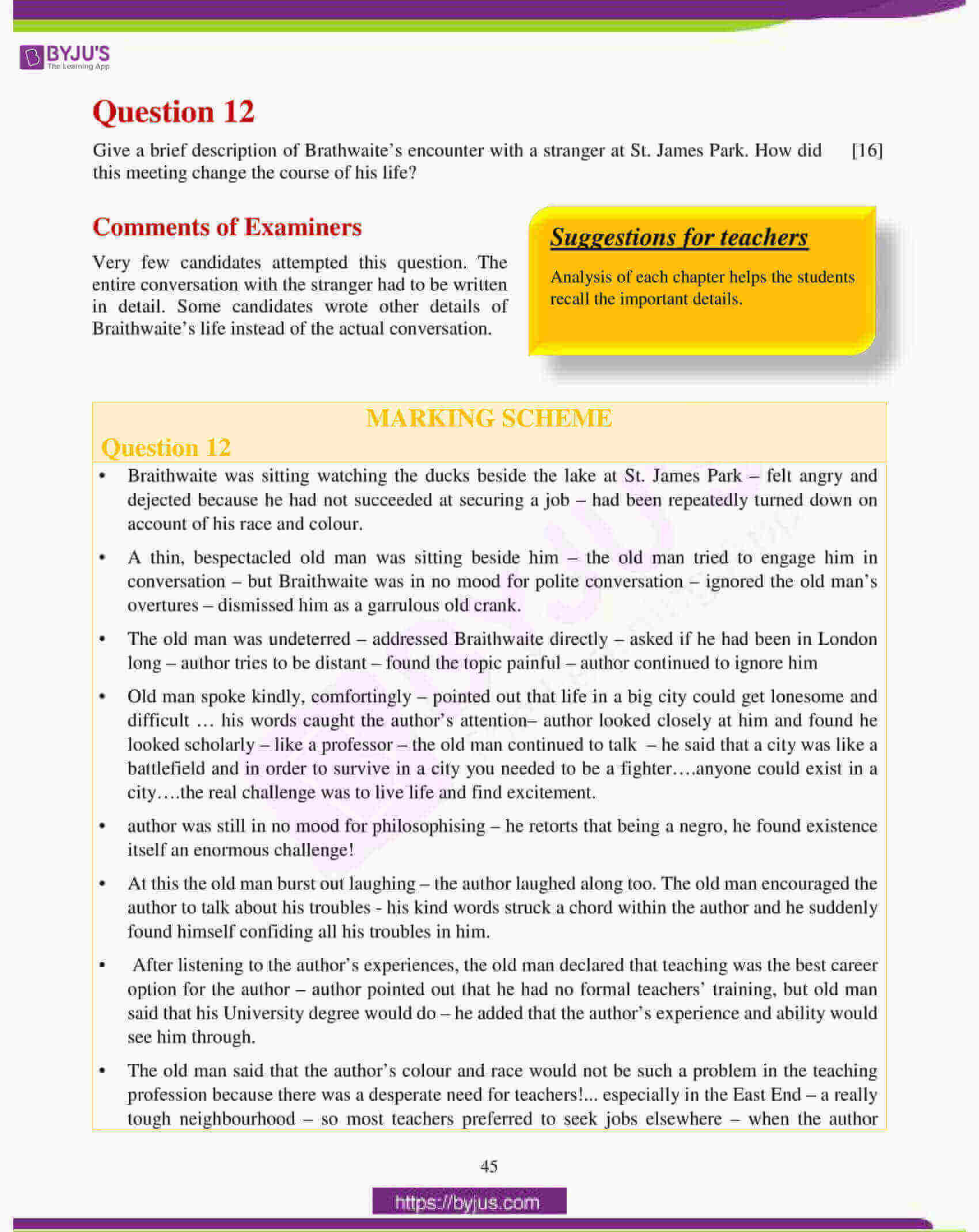 Question 1:Read the extract given below and answer the questions that follow:

Portia: Go draw aside the curtains, and discover

The several caskets to this noble prince —

Morocco: The first, of gold, who this inscription bears,

“Who chooseth me shall gain what many men desire”;

(i) Who is Morocco? How did he introduce himself to Portia when they first met in an earlier scene?

(ii) How would Morocco know that he had made the right choice? What would his reward be?

(iii) Which casket did Morocco finally choose? What reasons did he give for rejecting the casket made of lead?

(iv) What two objects does Morocco find in the casket of his choice? What reason does he give to Portia for leaving in haste?

(v) How does Portia respond to Morocco’s parting words? What does this reveal of her nature?

sun/ where he was born and brought up

He decides that a noble [golden] mind like his should not stoop to such a worthless choice.

He was not prepared to risk anything for lead.

It is damnation to think so base a thought.

The lead casket is too gross to even rib Portia’s cerecloth.

(v) Portia says “A gentle riddance… Let all of his complexion [kind, personality] choose me so”/

She is happy to see him go.

Read the extract given below and answer the questions that follow:

Bassanio: Were you the doctor, and I knew you not?

Gratiano: Were you the clerk?

Antonio: Sweet lady, you have given me life and living;

For here I read for certain that my ships

Are safely come to road.

My clerk hath some good comforts too for you.

(i) Where does this scene take place? What had Portia directed Antonio to give to Bassanio just moments before the above words were spoken?

(ii) Portia had just given Antonio, Bassanio and Gratiano a letter to read. Who had written this letter? What does Bassanio learn about Portia from this letter?

(iii) What good news does Portia have for Antonio? How does he respond to it?

(iv) To whom does Portia refer as ‘My clerk’? What ‘good comforts’ does the ‘clerk’ have for Lorenzo?

Question 3: Read the extract given below and answer the questions that follow:

Canynge: You and I had better see the Inspector in De Levis’s room, Winsor. [To the others] If you’ll all be handy, in case he wants to put questions for himself.

Margaret: I hope he’ll want me; it’s just too thrilling.

Dancy: I hope he won’t want me; I am dog-tired. Come on Mabel.

[He puts his arm in his wife’s]

(ii) Why does Canynge suggest that they see the Inspector in De Levis’ room? What does Margaret find ‘thrilling’?

(iii) Who enters soon after? What had this person been asked to do earlier?

(iv) How does De Levis happen to have such a large sum of money on that particular day? What steps does he take to keep the money safe?

(v) Whom does De Levis suspect of having stolen his money? What leads Canynge to suspect the same person? What is Canynge’s opinion of this person?

Earlier that evening when Lady Adela had called the Police Station at New Market to report the theft, Inspector Dede had said he was ‘coming like the wind on his motor cycle’.

After dinner he had counted the money, had placed it under his pillow and locked the door

when he went for his bath.

Question 4: Read the extract given below and answer the questions that follow:

pack. Quick! No! Don’t wait to take things. Have you got money?

(i) Where is this scene set? What had Dancy just confessed to Mabel?

(ii) What had Dancy’s lawyer suggested he should do? Why had he made this

(iii) How does Mabel express her loyalty to Dancy soon after he had made the confession? Who knocks at the door at this point?

(iv) Who else enters the house? What sound do they all hear? Why does Mabel faint?

(v) What message did Dancy’s letter contain? What is your opinion of Dancy at the end of the play?

He had also confessed that, he had given a thousand pounds to a woman – who was

blackmailing him –– It was a debt of honour that he had to pay.

Question 5: Read the extract given below and answer the questions that follow:

“I’m grateful, Sir”, he whispered, as I handed my canteen

And smiled a smile that was, I think, the brightest that I’ve seen.

Could find himself defeated by a small pain in his chest.”

(i) Where is ‘he’ when the narrator encounters him? Describe the scene around him.

(ii) What does ‘he’ ask the narrator for? What reasons does he give for his request?

(iii) What does the narrator see when he looks at him? How do we know that ‘he’ is very

young and completely unaware of the seriousness of his injury?

What is the central theme of this poem?

he was wounded (had a small pain in his chest)/ and weary.

remorse; compassion; disappointment; misery; he feels their wounds pressed the large one in

his heart and the small one of the soldier, etc.

Theme: Devastation caused by war and the senseless loss of young lives/ agony of brave soldiers/ horrors of war/ sense of duty/ highlights the sacrifice made by soldiers/ soldiers have to suffer in a war they did not cause/ / The narrator represents the collective guilt of mankind/ the theme of the poem is courage and bravery/never give up.

Question 6: Read the extract given below and answer the questions that follow:

I am going out rarely, now and then

Only, this is price of old age

But my health is O.K.

(i) Who is the speaker? What relationship did he share with the listener?

(ii) How many sons does the speaker have? What does he say about them?

(iii) What are the names of the speaker’s daughters? Why does the speaker believe that his

daughters are ‘well settled in life’?

(iv) How old is the speaker? Why does he say that his health is ‘OK’? What reason does he give to explain his state of health?

(v) What characteristics typical of Indian speech and thought does the poet make fun of through this poem?

Their husbands are ‘very nice boys’.

Question 7: Read the extract given below and answer the questions that follow:

He felt the weight too, and he wondered how he was going to manage.

‘He is too big for you’ said the mother. She spoke in the whisper of despair. ‘You will

(i) Who was the ‘boy’? Why was Sher Singh sure that the little boy would die?

(ii) What did Sher Singh’s father do for a living? Mention any two acts of courage he had

performed that had earned him the title ‘Bahadur’.

(iv) Mention any three challenges that Sher Singh encountered on his way to the hospital.

(v) How does the doctor at the hospital address Sher Singh at the end of the story? Why do you think he refers to him in this way?

expedition he was called.

Any two of the following:

(iv) Any three of the following:

Question 8: With close reference to the text, show how Stephen Leacock makes effective use of humour and exaggeration to describe his attempts to get back his ‘Lost Dollar’.

The concluding lines urge the reader not to leave a copy of this piece of writing where Major Todd of the University Club, Montreal may come across it – It is all too evident that the narrator means exactly the opposite – why else would he supply all of Todd’s contact details?

Question 9: Read the extract given below and answer the questions that follow:

It was just after the sheep had returned, on a pleasant evening when the animals had

finished work and were making their way back to the farm buildings, that the terrified

neighing of a horse sounded from the yard. Startled, the animals stopped in their tracks.

(i) From where did the sheep return? Under whose supervision were they? What were they

taught while they were in this place?

(ii) Whose voice was it that startled the animals? What did the horse see that caused it to neigh in terror?

(iii) How did the animals react to this sight at first? Why were they not able to protest?

(iv) Why did Clover lead Benjamin gently to the end of the barn immediately after this? What did they find written on the wall?

(v) What strange and disturbing change did the animals observe in the pigs when they peered in at the dining room window later that evening?

The chance to utter any protest had passed as the pigs had marched back into the Farmhouse.

Question 10: Give a brief account of the Battle of the Cowshed and Snowball’s role in it.

Question 11: Read the extract given below and answer the questions that follow:

As the bus moved slowly on, a bright-eyed little boy in school cap and blazer paused

momentarily beside the vacant seat and then quickly moved a little way on ….

The conductor approached with his cheery ‘Any more fares, please, free ride only after

(i) Why did the school boy not occupy the vacant seat? What was he puzzled by?

(ii) Who was preparing to take the seat? What did the person do instead? Why?

(iii) What efforts did the conductor make to get this person to sit in the vacant seat?

(iv) What does the author do to help ease the situation? How does the conductor view the

(v) What was the author’s intended destination? What is his state of mind as he approaches this place?

‘Empty seat, beside you lady’

‘Seat here for you, lady’

‘No standing on the bus, lady’

made him feel even worse. All his positive and optimistic feelings drained away.

Question 12: Give a brief description of Brathwaite’s encounter with a stranger at St. James Park. How did this meeting change the course of his life?

conversation – but Braithwaite was in no mood for polite conversation – ignored the old man’s overtures – dismissed him as a garrulous old crank.

We hope students found this information on “ICSE Class 10 English Literature Question Papers Solutions 2018” helpful for their exam preparation. They can also access solutions of other subjects of ICSE Class 10 Previous Years Question Papers by clicking here. Stay tuned to BYJU’S for the latest update on ICSE/CBSE/State Boards/Competitive exams. Also, download the BYJU’S App and fall in love with learning.