Organic chemistry is a specific discipline within the subject of chemistry that mainly involves the study of the structure, composition, properties, reactions, and preparation of compounds containing carbon. Students who study chapter 12 will basically be introduced to the simple nomenclatures and they will learn about the properties, synthesis and reactions of various functional groups including alcohols, hydrocarbons, carboxylic acids and derivatives. However, the primary objective of this chapter is to help students develop critical thinking skills related to the subject matter. To assist students in understanding organic chemistry and the related concepts clearly, ICSE solutions for class 10 chemistry chapter 12 is provided here. 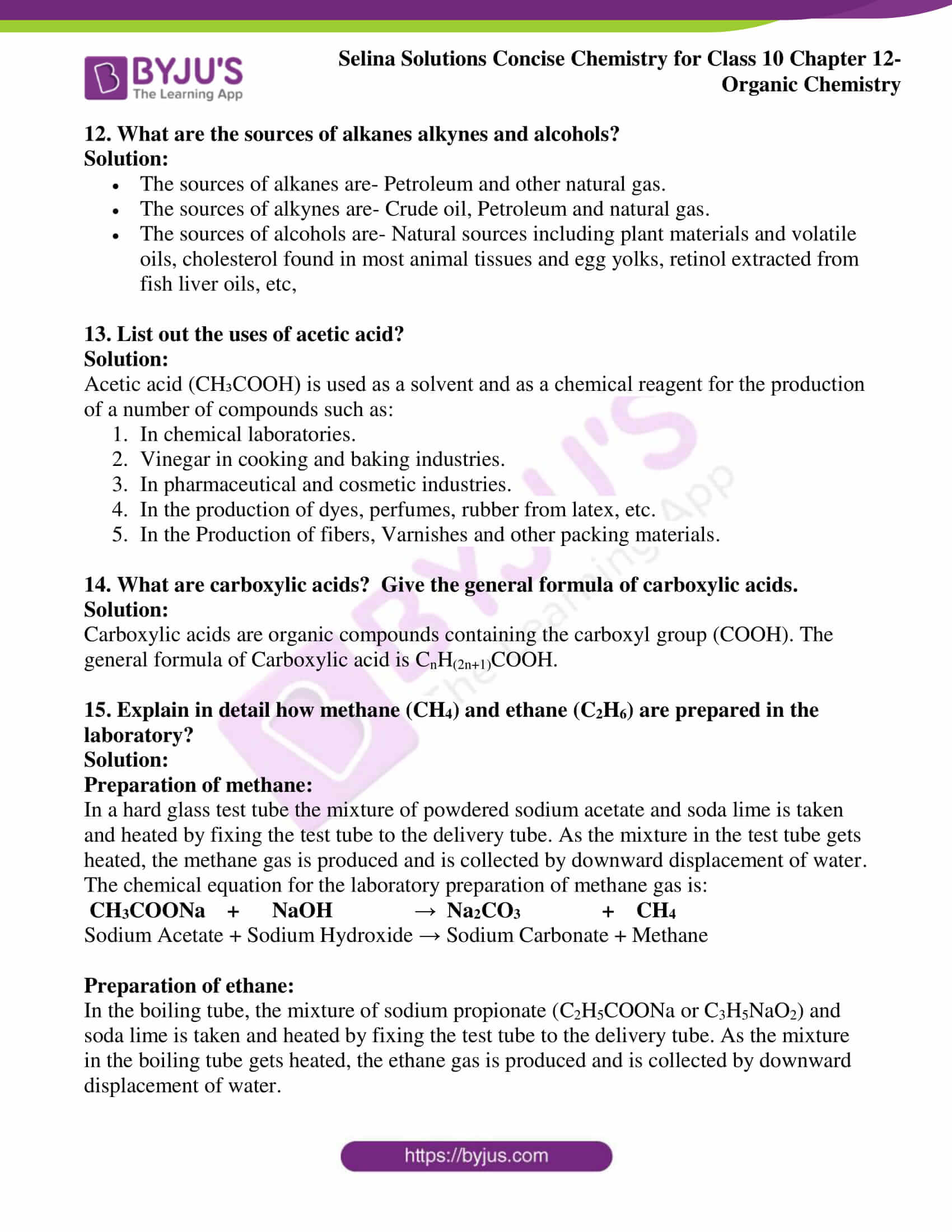 1. What is organic chemistry?

Organic chemistry can be defined as a branch of chemistry, which is concerned with the study of carbon compounds, especially which are found in living things along with its properties, functions and its reactions combined with other elements.

There are two primary types of isomerism: Structural Isomerism and Stereoisomerism.

The compounds which are generally composed of carbon n and hydrogen atoms are defined as the Hydrocarbons. Methane (CH4), Ethane (C2H6), Propane (C3H8), Butane (C4H10) are examples of hydrocarbons.

4. What is a homologous series?

The series of compounds with the same general formula, fixed set of functional groups, with similar chemical and physical properties are termed as the Homologous series. These series usually differ in the length of a carbon chain. For example–Ethane, butane, methane, propane, etc. are all part of the alkane homologous series.

5. Write the structural formula for the given compounds.

6. Define addition reactions with an example?

The chemical reaction in which two or more atoms are added to the double or the triple bond atoms to obtain a saturated product. This process is termed as an additional reaction.

7. Write the balanced chemical equations for the following reactions:

8. Why is methane (CH4) called a greenhouse gas?

Gases that trap heat in the atmosphere are called greenhouse gases. Among all other greenhouse gases, methane is called one of the most potent or the most important because it has an ability to absorb the maximum amount of heat in Earth’s atmosphere.

9. What are the harmful effects of ethanol on the human body?

Ethanol, also called ethyl alcohol. It is a chemical compound with the chemical formula C2H5OH. It is a volatile, flammable and colourless liquid used as an organic solvent in many alcoholic beverages, chemical and cosmetics industries. The harmful effects of ethanol on the human body include:

10. What is glacial acetic acid?

11. What are the physical and chemical properties of alcohol?

12. What are the sources of alkanes alkynes and alcohols?

Acetic acid (CH₃COOH) is used as a solvent and as a chemical reagent for the production of a number of compounds such as:

15. Explain in detail how methane (CH4) and ethane (C2H6) are prepared in the laboratory?

In a hard glass test tube, the mixture of powdered sodium acetate and soda-lime is taken and heated by fixing the test tube to the delivery tube. As the mixture in the test tube gets heated, the methane gas is produced and is collected by downward displacement of water.

The chemical equation for the laboratory preparation of methane gas is:

In the boiling tube, the mixture of sodium propionate (C2H5COONa or C3H5NaO2) and soda-lime is taken and heated by fixing the test tube to the delivery tube. As the mixture in the boiling tube gets heated, the ethane gas is produced and is collected by downward displacement of water.

The chemical equation for the laboratory preparation of ethane gas is:

17. Define the substitution reaction with examples?

18. Give the structure for the following compounds?

19. What is pyrolysis or cracking? Explain with an example.

When Alkanes are heated under high temperature and in the absence of air, the alkanes are broken down into lower alkanes, alkenes and hydrogen.

The equation for Cracking of Alkanes is

20. What happens when ethylene (C2H4) is passed through the alkaline KMnO4 solution?

When ethylene gas is passed through an alkaline KMnO4 solution, it reacts with the cold Potassium permanganate solution and forms a very unstable compound called 1, 2-Ethanediol is formed by decolourization of the purple colour of KMnO4.

The solutions are available in the form of a PDF and students can use it as a great reference tool to get insight into important topics as well as find answers to all the questions given in the Selina textbook. These solutions are prepared by experts and they have further taken great care to make it most relevant and in line with the latest ICSE guidelines.