Students who refer Selina textbook for chemistry in class 10 will come across chapter 9 which helps them examine the topic of Ammonia. This is one of the topics which is discussed often in chemistry and this chapter will help students learn everything about it. They will study the laboratory preparation of ammonia from ammonium chloride, nitrides and ammonium salts, Haber’s Process, density and solubility of ammonia, an aqueous solution of ammonia and its reactions with certain compounds, the burning of ammonia in oxygen and finally the uses of ammonia. While there are a lot of topics to study, free concise chemistry class 10 ICSE Solutions for chapter 9 given here will help students learn in an easy and efficient manner. The solutions offered here have been designed by experts to help students grasp the concepts quickly and understand all the topics and even experiments clearly. Furthermore, the solutions contain detailed explanations and answers which will help students solve questions easily and study effectively for the exams. 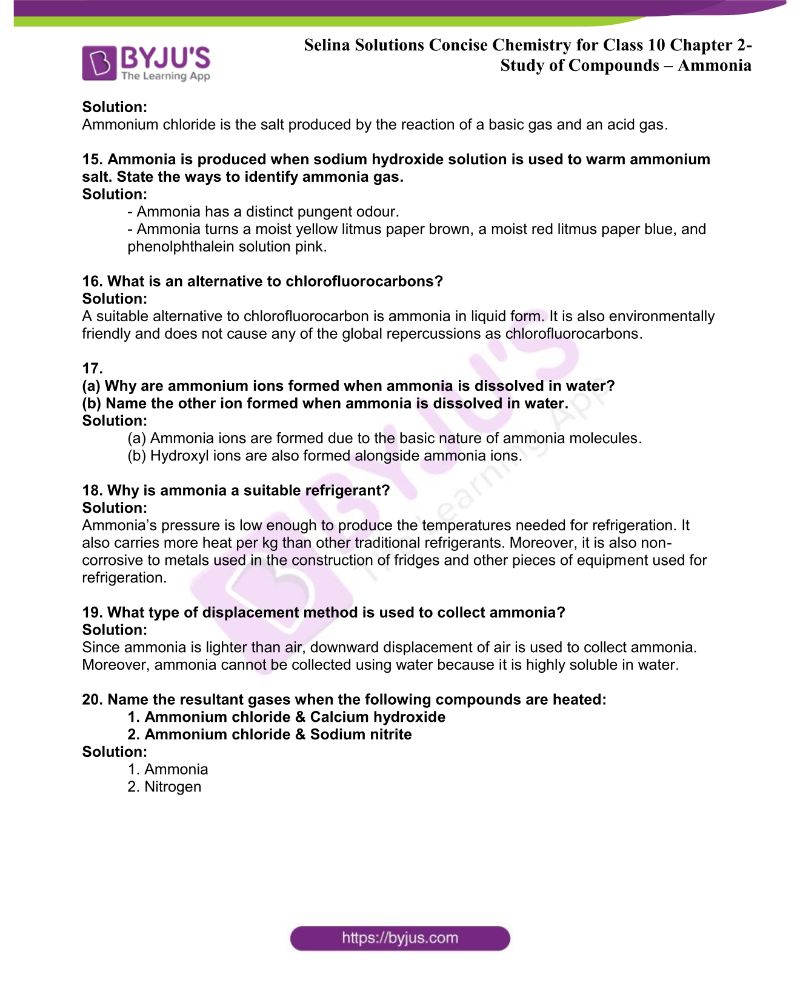 1. How dense is ammonia compared to air?

Ammonia has less density when compared to air.

2. What does the Fountain Experiment demonstrate?

3. What is the balanced equation for the reaction that occurs between sulphuric acid and ammonia?

The balanced equation for the above reaction is as follows:

Ammonia is the odd one out as it is basic.

5. Gas ‘Z’ gives off dense white fumes when it reacts with chlorine. Its aqueous solution exhibits a blue colour with copper (II) hydroxide.

2. The formula for ammonia is NH3

Ammonia has many applications:

1. Ammonia is used primarily as a fertilizer

2. Ammonia is also used as a refrigerant gas

3. Used in the production of explosives and plastics

5. Ammonia also has applications as a pesticide

6. Ammonia is also used in the manufacture of sodium carbonate by the Solvay process.

7. What happens when ammonium hydroxide is added to the aqueous solution of Zinc nitrate?

When this reaction occurs, a gelatinous white precipitate of zinc hydroxide is formed. It is soluble in ammonium hydroxide.

8. What happens when ammonium hydroxide is added to the aqueous solution of Iron(II) sulfate?

A green-ish precipitate of ferrous hydroxide is formed. It is insoluble in excess of ammonium hydroxide.

9. How do you distinguish between ferric salt and ferrous salt through a chemical test?

Using a dropper, ammonium hydroxide can be added to two test tubes containing the salts:

– The test tube with ferrous salt will result in a dull-green precipitate.

– The test tube with a ferric salt will result in a reddish-brown precipitate of its hydroxides.

1. What is the gas created by Haber’s process?

11. Which salts of ammonia are used in the following:

12. Name the acidic gas that reacts with a basic gas, resulting in the formation of neutral gas.

When hydrogen chloride reacts with a basic gas such as ammonia, ammonium chloride is formed – which is a neutral gas.

1. Name the metallic chloride which is soluble in ammonium hydroxide.

2. Name the gas formed when ammonia is burnt in an atmosphere containing oxygen (no catalyst present)

14. What is the salt produced by the reaction of basic gas and an acid gas?

Ammonium chloride is the salt produced by the reaction of a basic gas and an acid gas.

15. Ammonia is produced when sodium hydroxide solution is used to warm ammonium salt. State the ways to identify ammonia gas.

– Ammonia has a distinct pungent odour.

16. What is an alternative to chlorofluorocarbons?

(a) Why are ammonium ions formed when ammonia is dissolved in water?

(b) Name the other ion formed when ammonia is dissolved in water.

(a) Ammonia ions are formed due to the basic nature of ammonia molecules.

(b) Hydroxyl ions are also formed alongside ammonia ions.

18. Why is ammonia a suitable refrigerant?

Ammonia’s pressure is low enough to produce the temperatures needed for refrigeration. It also carries more heat per kg than other traditional refrigerants. Moreover, it is also non-corrosive to metals used in the construction of fridges and other pieces of equipment used for refrigeration.

19. What type of displacement method is used to collect ammonia?

Since ammonia is lighter than air, downward displacement of air is used to collect ammonia. Moreover, ammonia cannot be collected using water because it is highly soluble in water.

20. Name the resultant gases when the following compounds are heated:

The given solutions are as per the 2019-20 Concise Selina textbook. The Selina Solutions for the academic year 2020-21 will be updated soon.