The relation between the areas of two similar triangles is the main focus in this exercise. Students having difficulties in understanding any concept can quickly refer to the Selina Solutions for Class 10 Maths, as per their convenience. Experts at BYJU’S have created this valuable tool to help students boost their exam preparations. Further, the solutions to this exercise are available in the Concise Selina Solutions for Class 10 Maths Chapter 15 Similarity (With Applications to Maps and Models) Exercise 15(C) PDF in the link below. (ii) Areas of two similar triangles are 98 sq. cm and 128 sq. cm. Find the ratio between the lengths of their corresponding sides. The ratio of the areas of two similar triangles is equal to the ratio of squares of their corresponding sides.

(i) The required ratio is given by,

(ii) The required ratio is given by,

2. A line PQ is drawn parallel to the base BC of Δ ABC which meets sides AB and AC at points P and Q respectively. If AP = 1/3 PB; find the value of:

As PQ || BC, corresponding angles are equal

3. The perimeters of two similar triangles are 30 cm and 24 cm. If one side of the first triangle is 12 cm, determine the corresponding side of the second triangle. (ii) the ratio between the areas of trapezium XBCY and triangle ABC.

As XY || BC, corresponding angles are equal.

5. ABC is a triangle. PQ is a line segment intersecting AB in P and AC in Q such that PQ || BC and divides triangle ABC into two parts equal in area. Find the value of ratio BP: AB.

[Multiplying by √2 in both nominator & denominator]

Calculate the value of ratio: 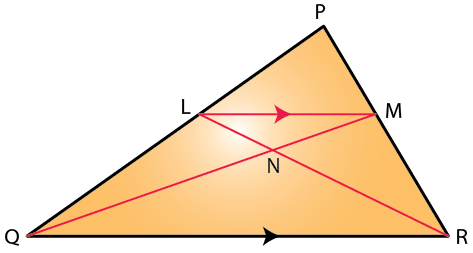 And, by BPT we have

(iii) As Δ LQM and Δ LQN have common vertex at L and their bases QM and QN are along the same straight line.