Selina publishers are the finest publishers for ICSE textbooks which promotes quality learning. Selina solutions aims at providing a robust and comprehensive set of solutions for mathematics and all streams of science such as biology, physics and chemistry. The study material is so apt and to the point that over the years, students have recommended referring to these solutions to score optimum marks at the examinations and achieve success.

The solutions are framed by a team of experts at BYJU’S having extensive knowledge in their respective subjects and the solutions are in sync with the latest syllabus in accordance with the C.I.S.C.E. Apart from getting solved answers, one of the other benefits of these solutions is that students can grasp the answering methodologies to answer in the examinations accordingly. 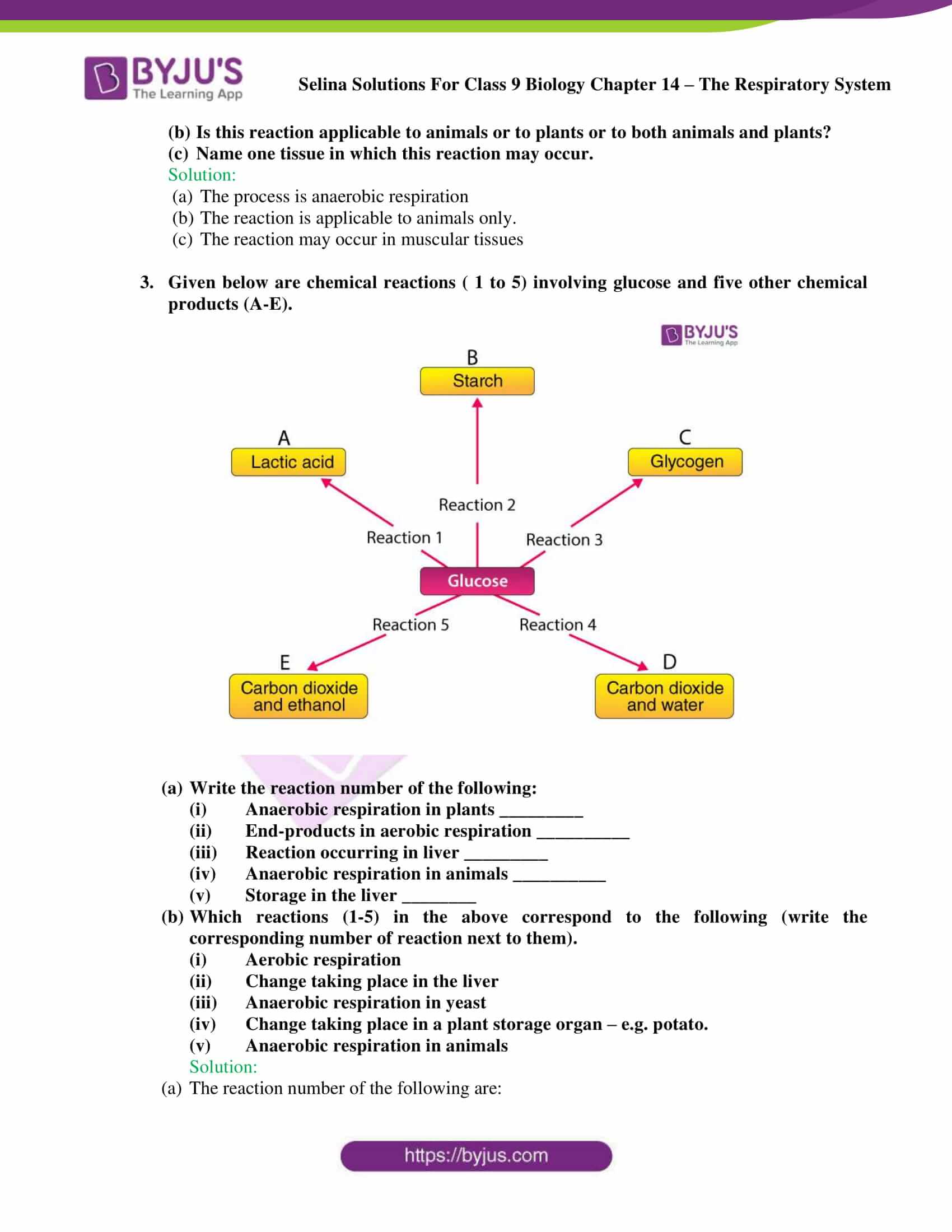 Fill in the blanks on a similar pattern.

ICSE Class 9 Biology Chapter 14 – The Respiratory System chapter is classified under Unit – V – Human anatomy and physiology. Human anatomy is the science of the different structures of the human body. The consequence of reductionist approach to study life forms caused an increase in the use of Physico-chemical techniques and concepts. Most of these studies employed either surviving straightaway cell-free systems or surviving tissue model. It deals with the major human physiological processes such as respiration, digestion, blood circulation, movement and locomotion are discussed in cellular and molecular terms.

Human anatomy and physiology discuss the chapters listed below in class 9:

The different types of questions that are covered in this chapter are:

List of subtopics covered in Chapter 14 – The Respiratory System

The unit discusses the different organs involved in carrying out the process of respiration along with the functions, working mechanism of these structures. Breathing is an essential part of the survival of living entities.

Two types of respiration such as aerobic and anaerobic respiration are discussed in detail so that students get a clear idea of the differences between both the processes in animals and plants. Respiration has different parts such as : Breathing, Gaseous transport, Tissue respiration, Cellular respiration

The different respiratory organs briefed are as follows:

Lastly, students are enlightened about the blood supply mechanism to the lungs and the respiratory cycle in order to clearly understand the inspiration and expiration processes. Capacities of the lungs and experiments on breathing and respiration are also presented towards the end of the chapter.

Write the overall chemical equation representing the above definition of respiration?

The chemical equation is as follows:

In what form is the energy liberated in respiration?

A large part of the energy liberated is in the form of ATP (adenosine triphosphate).

Give two examples of life activities which need energy?

We need energy because:

Which chemical compound inside a cell can be termed “Currency of Energy”?

Under what conditions would the breathing rate increase?

Breathing rate can increase under the following circumstances:

How would you prove that the air you breathe out is warmer?

The air that we breathe out is warmer or as per the temperature of the body as it can be felt when breathing out the air on your hands. We can feel the warmth of the air that is exhaled during breathing.

How is the respiratory passage kept free of dust particles?

The respiratory passage is kept free of dust particles as the nasal cavity is lined by ciliated epithelium and mucous glands which secretes mucus. This ciliated epithelium is present through the lining of the trachea, larynx, bronchioles and bronchi. The constant motion of mucous and cilia traps micro-organisms, dust, pollen and other tiny particles existing in the air.