Effect of Water on Organisms

Living entities thrive on water. Water is essential to carry out basic biological processes. All the oxygen-dependent entities require water to assist in the process of respiration. Some entities can only breathe in water (fish), while some others necessitate water to disintegrate food molecules or in the generation of energy in the respiratory process. Also, water aids many entities regulate metabolism and dissolve compounds moving in and outside the body. 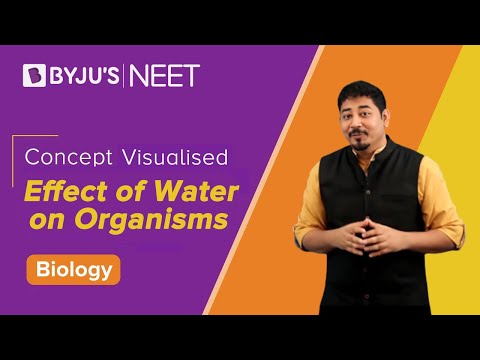 Role Of Water As A Solvent

Role Of Water As A Temperature Buffer

Water has a capacity to take a lot of heat, increasing temperature as water has a high specific heat capacity. Hence, water absorbs heat without the temperature of the entity being elevated. This inhibits enzymes from getting overheated and malfunctioning.

Role Of Water As A Metabolite

Water is a metabolite or a chemical involved in reactions. Hence, it is vital for the sustained survival of both animals and plants.

Water assists in photosynthesis in plants. In its first stage, water splits into oxygen and hydrogen atoms. Oxygen is liberated into the atmosphere, hydrogen is used in the other chemical reactions to give glucose feeding to the plant.

Water in plants assists in respiration. It helps split ATP into ADP and phosphoric acid. Cellular energy is given out as a byproduct in the process. The formation of water from oxygen and the depleted hydrogen propels waste products out of the body post the completion of the respiration cycle.

It is the measure of dissolved salts in the water which is typically expressed in parts per thousand (ppt). For instance, the salinity of freshwater is 0.5 ppt or less while the average salinity of oceanic water is said to be 35 ppt.

Entities are usually said to be sensitive to changes in the level of salinity and these levels regulate the composition of local species. Changes in the salinity can take place due to weather patterns such as storms or droughts or it can signal us to events such as sewage discharge and elevated urban runoff. Such events can alter the water state as the concentration of dissolved minerals salts usually increases with such types of events.

This was a brief on the effect of water and the role of water on living entities. Explore more related topics on NEET at BYJU’S.