How Primates Differ From Other Mammals

Primates constitute an order of the class Mammalia of zoology that includes the lorises, lemurs, monkeys, tarsiers, apes, and humans. The order Primates contains more than 300 species, and it is the third most diverse order of class Mammalia after order Rodentia (rodents) and order Chiroptera (bats). The English name “primates” is derived from French word primat, which is a noun form of the Latin adjective primat – from primus ( meaning “prime or first rank”). The name was given by Carl Linnaeus because he thought this was the “highest” order of animals.

About 55-85 million years ago the ancestors of modern primates, known as Plesiadapiformes arose from small mammals(terrestrial). These were adapted for arboreal life in tropical forests. Numerous primate features indicate life adaptations in this demanding environment, which also includes large brains, dexterous hands, clarity of vision, color vision, and modified shoulder girdle. The smallest primate is Madame Berthe’s mouse lemur (Microcebus berthae) of Madagascar, which weighs some 35 grams; the most massive is certainly the gorilla (Gorilla gorilla), whose weight varies from 140 to 180 kg.

Primates differ from other mammals

The brain of primates is bigger compared to other terrestrial mammals in comparison to their body weight. It possesses a unique fissure called the Calcarine sulcus which divides the first and second visual cortexes on either part of the brain. 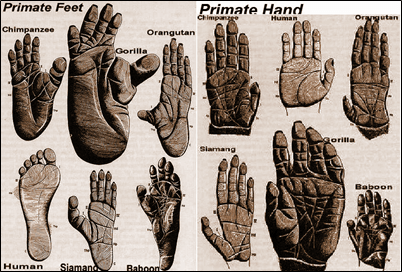 All terrestrial mammals have hooves or claws on their digits, except primates which possess flat nails. A few primates have claws, however even among these, there is a flat nail on the hallux (big toe). Except for humans in all primates, the hallux separates from the other toes and along with it forms a pincer capable of grasping objects such as branches. Grasping feet occurs in other arboreal mammals such as squirrels and opossums indicating that the present-day primates evolved form an ancestor that was arboreal. All primates have five fingers (pentadactyl).

Members of the infraorder Catarrhini (Old world monkeys) which includes monkeys apes and humans have dexterous hands possessing opposable thumbs. A few of the lemurs and lorises also have an opposable thumb. Primates possess specialized nerve endings known as Meissner’s corpuscles, in the feet and hands which increase the tactile sensitivity; no other placental mammal is known to possess this feature. Primates have a big brain (compared to body size) relative to other mammals, they tend to rely on their improved sense of vision, unlike most mammals which rely on the smell-sense. This feature is more advanced in apes and monkeys and remarkably lesser in lemurs and lorises. Also, except for humans and apes, all primates possess tails.

The development in primates is slower in comparison with mammals of similar body size; they reach maturity later and have longer lifespans. Solitary or mated pairs or group lifestyles are all seen in different species of primates. Several species are sexually dimorphic; variations may include fat distribution, muscle mass, canine tooth size, pelvic width, hair distribution, along with colouration.

From arboreal mammals, over time have evolved into a terrestrial mode of life, at least partially and several others have evolved a high level of intelligence too. Primates mostly differ due to their behaviour and morphological distinctions among the members of the group is far and few in between. Probably, the most thriving primates are those which have least departed from the ancestral pattern of structure but from the ancestral behavioural pattern, they are the farthest.

The habitats of the primates are found almost all over the world. However, non-human primates are restricted in distribution, occurring mostly in Central and South America, Africa and southern Asia. A few species of primates are found in North America as far as southern Mexico, and in northern parts of Asia such as Japan. Japanese macaque living in the Japanese islands of Hokkaido and Honshū; the Barbary macaque living in North Africa and various langur species living in China are some of the species which live outside of the tropics. Apart from tropical rainforests primates are seen in savannas, temperate forests, mountains, deserts, and coastal areas.

Most species are primarily adapted for arboreal life but exceptions to this are humans, gorillas and baboons. Locomotion techniques of the arboreals utilized by primates involve leaping from one tree to another and swinging amidst branches of trees (brachiation); terrestrial locomotion routines involve walking/moving on two limbs (bipedalism) and altered walking/moving on four limbs (knuckle-walking).

The principal food substances taken by primates may be divided into three food groups: animal prey (insects and other invertebrates, including spiders and crustaceans, along with birds’ eggs and small vertebrates) which is rich in protein and fat; plant reproductive parts (i.e. fruits, flowers, seeds, nuts, tubers, and rhizomes) which are mainly a source of carbohydrate, although seeds and nuts are also rich in proteins and lipids; and vegetative parts (i.e. grasses, leaves, stems, and also parts such as bark and gums).

Primates are divided into two distinct suborders. The first suborder is called strepsirrhines (from Greek ‘wet-nosed’), which contains lemurs, galagos, and lorisids. The second suborder is called haplorhines, which contains “dry-nosed” primates (from Greek ‘simple-nosed’) in the tarsier, monkey, and ape clades. The last of these groups includes humans.

According to the International Union for Conservation of Nature (IUCN), primate population greater than a third are either vulnerable or critically endangered. Nearly 60% of primate species are cautioned with extinction, which includes: Madagascar species ( 87%), Asia(73%), Africa(37%), and in South and Central America(36%). In addition, 75% of primate species have declining populations.

There are 21 critically endangered primates, seven of which have remained on the IUCN’s “The World’s 25 Most Endangered Primates” list since the year 2000. They include, the Silky Sifaka, Delacour’s Langur, the white-headed Langur, the grey-shanked Douc, the Tonkin snub-nosed monkey, the Cross River Gorilla and the Sumatran Orangutan. Miss Waldron’s Red Colobus was declared extinct when no trace of the subspecies could be found from 1993 to 1999.

Forest fragmentation, deforestation, monkey hunting drives to mitigate crop-raiding and hunting for as pets, medicinal use, for food are regarded as the main causes for the threat of extinction in most of the areas. Large-scale tropical forest clearance is broadly perceived as the process that threatens primates the most. Clearing land for agriculture is the foremost cause of forest destruction. Subsistence harvesting of timber, commercial logging,  dam construction and mining also contribute to tropical forest destruction. One of the major challenges to primate conservation is that they approach sexual maturity later and have a more prolonged period between births. Hence, populations recover more slowly after depletion.

1. How many species of primates are known presently and where do they occur? Name the largest and the smallest primate. Which is the most widely distributed primate?

There are about 300 species of primates known worldwide. Primates are found almost all over the world. However, non-human primates are restricted in distribution, occurring mostly in Central and South America, Africa and southern Asia. A few species of primates are found in North America as far as southern Mexico and in northern parts of Asia such as Japan. The smallest of primates is Madame Berthe’s mouse lemur of Madagascar(Microcebus berthae), weighing some 35 grams; definitely the gorilla (Gorilla gorilla) is the most massive one, whose weight varies from 140-180 kg. Humans are the most widely distributed of the primates.

2. List some of the factors responsible for the declining population of primates in the wild.

Deforestation, forest fragmentation, monkey hunting drives to mitigate crop-raiding and hunting for use in medicines, as pets, and for food are regarded as the main causes for the declining populations of primates. Large-scale tropical forest clearing is widely regarded as the process that most threatens primates. Clearing land for agriculture is the main cause of forest loss. Commercial logging, subsistence harvesting of timber, mining, and dam construction also contribute to tropical forest destruction. One of the major challenges to primate conservation is that they reach sexual maturity later and have a longer period between births. Populations, therefore, recover more slowly after being depleted.

The infraorders under strepsirrhines are Lemuriformes and Lorisiformes. The infraorders under haplorhines are Trasiiformes and Simiformes. The parvorders of Simiformes, Platyrrhini and Catarrhini are called New world monkeys and Old world monkeys respectively. The Platyrrhini are found in the Americas which is called the New world and the Catarrhini are found in Africa and Asia which are known as the Old world.

4. List any three characteristics that are unique to primates.

Some unique characteristics of Primates are:

1. The brain of primates is larger than that of other terrestrial mammals in comparison to their body weight. It possesses a unique fissure called the Calcarine sulcus that separates the first and second visual cortexes on either side of the brain.

5. Which is the smallest primate and where is it found?

The smallest primate is Madame Berthe’s mouse lemur (Microcebus berthae) of Madagascar, which weighs some 35 grams.

Watch this space for more on differences important for NEET and other related NEET topics.