What is Plant Taxonomy?

The term “taxonomy” originates from two words, “taxis” meaning arrangement and “nomos” meaning laws. Plant taxonomy deals with the classification of plants according to certain set rules. The term taxonomy was coined by the Swiss botanist A. P. de Candolle in his book “Théorie élémentaire de la botanique”.

Plant taxonomy can be defined as the branch of botany which deals with characterisation, identification, classification and nomenclature of plants based on their similarities and differences.

The goals of plant taxonomy are:

Organisms are classified on the basis of similarities, closeness or relationship between them. It shows the phylogenetic relationship between different organisms and shows their line of descent. The similarities among individuals show that they might have developed from the common ancestor. It shows the evolutionary pathway of modern living organisms. Closely related organisms are included in a group, which share a common gene pool.

The number of common characteristics decreases as we move from species to the kingdom, where species having fundamental similarities and organisms in the same kingdom having least common features.

There are three main types of systems for plant classification. Here is the list of systems of plant taxonomy:

These were important in the history of biological classification as this was a novel attempt to organise living organisms. The demerit was that it didn’t consider morphological details and the evolutionary relationship. They gave equal importance to vegetative and sexual characters but it is not true. Vegetative characters are greatly influenced by the environment. As a result, the closely related species were kept apart.

Aristotle classified plants more than 2000 years ago on the basis of simple morphological characters into herb, shrub and trees.

Theophrastus in his book “Historia Plantarum or Enquiry into plants” attempted to arrange plants in various groups based on how plants reproduce and its uses. He is called “Father of Botany”.

Carl Linnaeus is known as the “Father of Modern Taxonomy”. In his book “Systema Naturae” (1735), he gave the hierarchical system of classification of the natural world into the plant kingdom, the animal kingdom and mineral kingdom.

He understood the importance of floral characters and classified plants based on the number of stamens present in them. It is also known as the sexual system of classification.

Linnaeus kept on adding new work to his publications. In “Species Plantarum” (1753), he gave a brief description of all the species known to him. He described around 7,300 plant species in it. He divided the plant kingdom into 24 classes based on the structure, union, length and the number of stamens. E.g. Monoandria (1 stamen), Diandria (2 stamens), Polyandria (more than 12 stamens), Monoadelphia (stamens united in a single bundle), Monoecia, Dioecia, Polygamia (polygamous plants), Cryptogamia (flowerless plants), etc.

He gave the Binomial nomenclature system. In “Philosophia Botanica”, he had given rules for naming every species. It is called binomial because each name has two components, genus name and species name, e.g. Solanum melongena (brinjal), Solanum tuberosum (potato) having the same genus but different species name.

2. Natural systems: In this system of classification, more characters were considered while classifying. It was based on the natural similarities of vegetative and floral characters among the organisms. It took into consideration various external and internal features like the anatomy of a cell, types of embryo and phytochemistry.

The Bentham and Hooker system of classification was published in the book “Genera Plantarum” in three issues over the years 1862 to 1883. 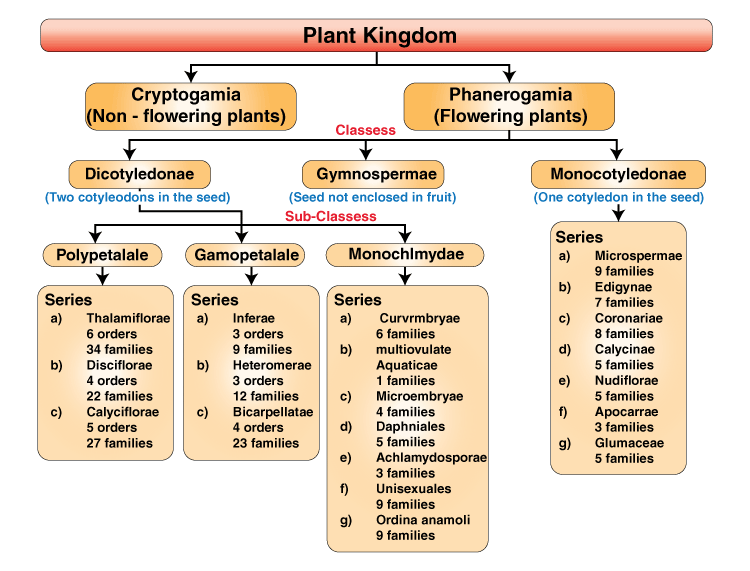 3. The Phylogenetic system of Classification: This system is based on evolutionary sequence and genetic relationship. The phylogenetic system of classification was developed after the publication of Darwin’s theory of evolution. Apart from the morphological characteristics found from fossil records, genetic constituents were also considered. It has been widely accepted by biologists all over the world. According to this system, all the organisms belonging to the same taxa originated from the common ancestor.

The two main phylogenetic systems of classification are: 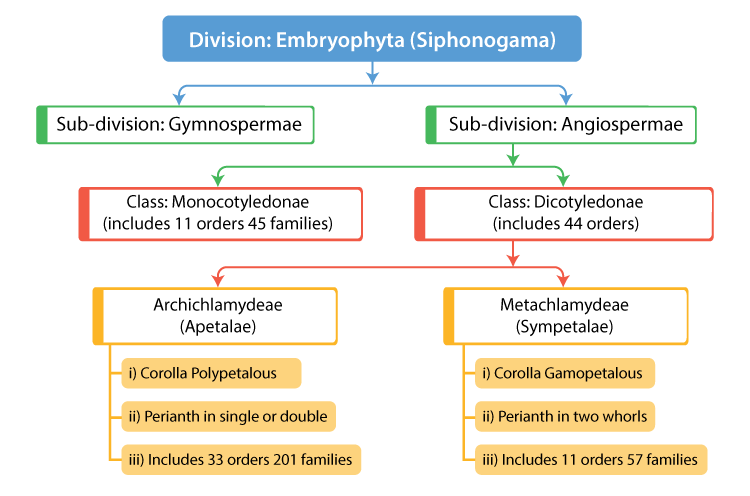 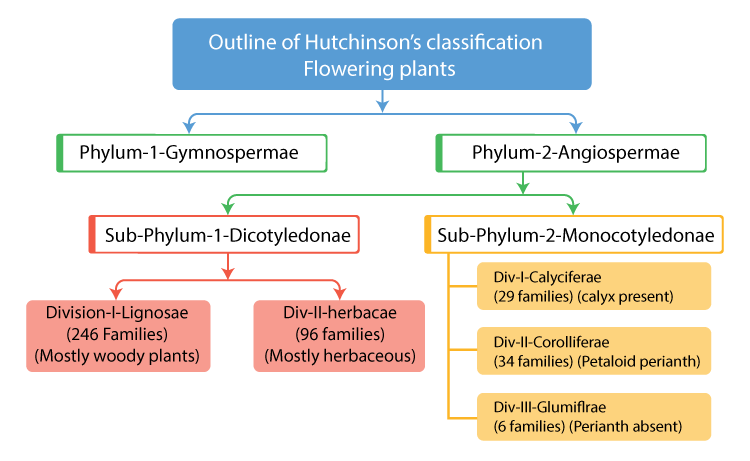 With the advent of molecular biology, many techniques to identify genetic materials have been developed. This has equipped us to compare individuals at different taxonomic levels and resolve the difficulties of classifying them even if there is no fossil evidence. 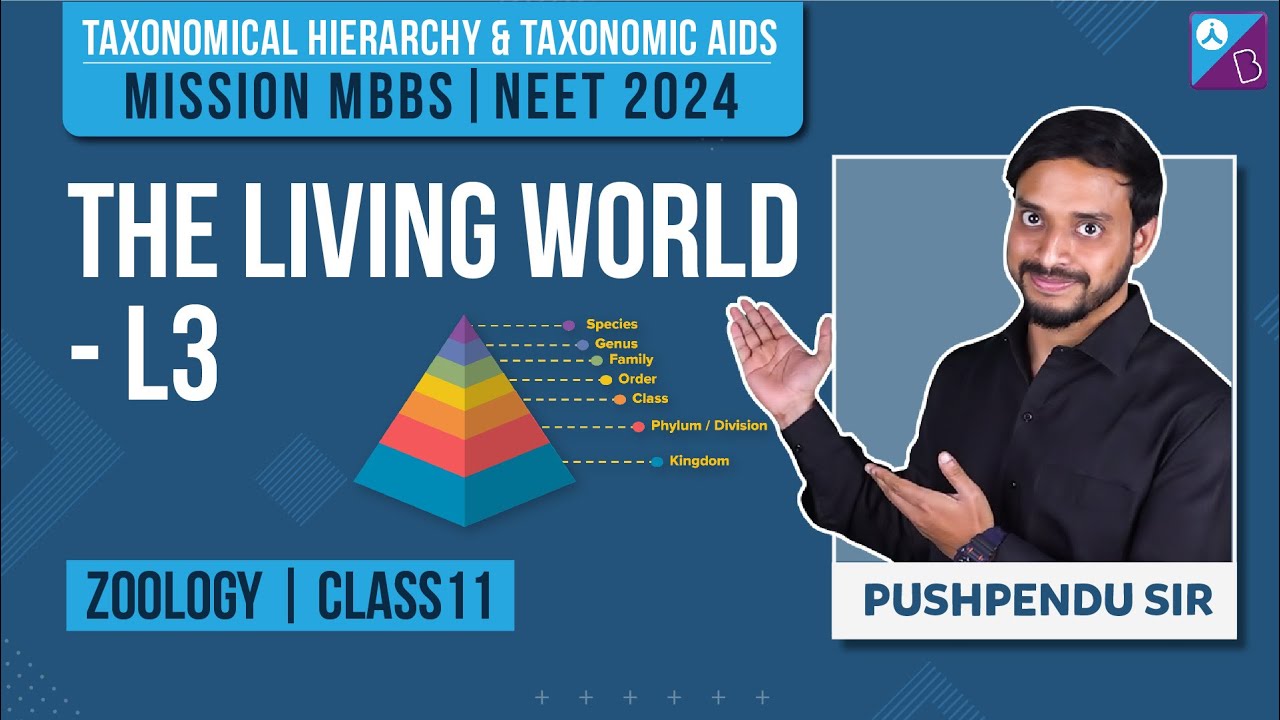 How many families are there in Bentham and Hooker classification?

There are 202 families in the Bentham and Hooker system of classification, Dicotyledons (165), Gymnosperms (3), and Monocotyledons (34).

What are the disadvantages of phylogenetic classification?

The only disadvantage of the phylogenetic system of classification is that it only talks about organisms with a common ancestor.

How do you write the scientific name of a plant?

The scientific name of the plant is written according to the taxonomy in a binomial name. The genus name is written first and the specific epithet is written second, both the names are written in italicised letters or otherwise underlined.