The mammary gland is a structure unique to the members belonging to the class Mammalia. It is involved in secreting, synthesizing and delivering milk to the neonate for its optimal protection, nourishment and development. Mammalian species differ in their composition of milk and are uniquely suitable for species for which it was synthesized. 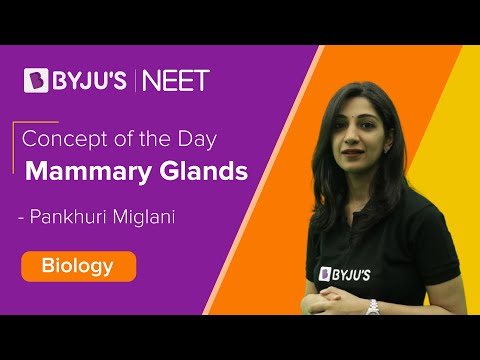 It is during the lactation cycle/pregnancy, the gland is able to reach a mature developmental phase under the influence of hormones at the cellular level, which affects the drastic alterations in the macro and microanatomy of this gland which leads to remodelling of the gland into an organ that secretes milk. The life cycle of the female mammary glands in humans is symbolized by drastic changes in the architecture, composition and functionality brought about by remarkable changes in gene expression. This distinguishes their physiological stages of development, which are all aiming at enabling it to perform its function as a milk-producing structure upon parturition. 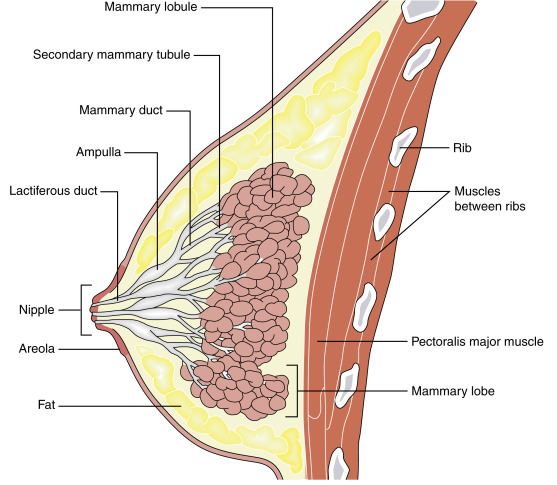 How Do Breasts Develop?

With the commencement of weaning, the regression of the PLC induced growth is initiated. It completes after the involution, when the breasts regress to a state of resting. The PLC induced mammary growth and following involution could be iterated at multiple pregnancies at the time of reproductive lifespan of a female. The cycle concludes with a subsequent stage of involution post-menopause. The complete development of the breasts at the time of lactation is vital for the provision of appropriate composition and volume of breast milk for the protection, growth and development of the infant.

At the time of puberty, the mammary gland experiences development that is distinguished by the incipience of large bulbous terminal end buds, which results in the infiltration of the branching epithelial ducts via the mammary tissue.

The ductal epithelium of the mammary anlage during pregnancy invades the mammary fat pad. This process is co-occurred by strong epithelial cell proliferation and differentiation that results in successful lactation. Such processes are regulated tightly by hormones such as prolactin, sex steroids and the growth hormone, which constitute the chief drivers of the development of mammary glands. Sufficient nutrition is of topmost significance at the time of profound and rapid physiological changes in the mammary tissues. Three animal models mainly have been used to study the impacts of the nutritional challenges from early life onwards and even at the time of every development phase of the mammary gland.

The structure of the mammary gland can be classified into three sections – skin, stroma and parenchyma.

The skin comprises the areola and the nipple.

It forms the supportive framework of the breast surrounding the parenchyma.

Until puberty, there is minimal breast development and can be compared in both sexes. At the time of puberty, in the effect of flowing growth hormones and estrogen, there is a rapid development of breasts in females with extensive development of the adipose tissue. This is how breasts get a smooth contour. Same way, at the time of early pregnancy, there is a rapid increase in the size of breasts as a result of enhanced growth of parenchyma and branching in the ductal system.

Such changes are a result of a surge in the progesterone and estrogen hormones. The secretory alveoli begin to develop at the duct terminals and are wrapped by the connective tissue. In the further phases of pregnancy, such alveoli are loaded with milk under the action of prolactin. After the termination of lactation, the secretory alveoli begin to shrink and decreases in size and number and disappears subsequently. However, the mammary glands do not return to the pre-pubertal phase. In the later phases of life, particularly post-menopause, breasts exhibit extreme regression in their size.

Function of the Mammary Glands

Hormones have a significant role in promoting the chief function of the mammary glands – the production of milk. Estrogen has a vital role in the expansion of the milk ducts, which causes them to branch out to accommodate more milk.

At the time of puberty, the growth hormones and estrogen cause the development and growth of the mammary glands. As progesterone and estrogen in pregnancy increase, there is a growth in the milk ducts and the enlargement of breasts.

The prolactin lends to the development of the mammary glands and milk production. The progesterone assists in lobules to grow to prepare for lactation, in addition to the enlargement of the blood vessels in the breast after ovulation. It offers tenderness and swelling of the breasts. The hormone oxytocin induces milk to be ejected from glands. With a drop in the production of estrogen at the time of menopause, the mammary glands shrink, which leads to the breasts seeming softer and less bulky with age.