Abscission means the act of cutting off. Abscission is a naturally occurring phenomenon which involves the separation of fruits, flowers or even leaves from plants at specialized separation layers. In other words, it is the normal shedding of a senescent plant structure or a part. It takes place to separate a part of the plant that is not essential anymore to the plant. 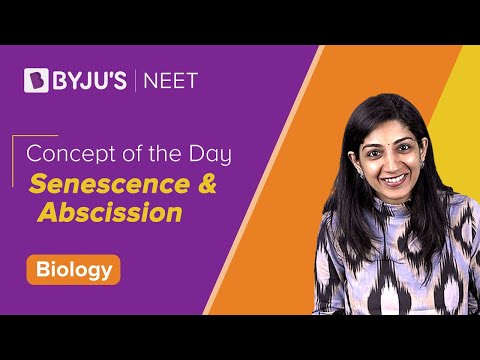 Abscission of leaves is the normal shedding of an old leaf at the base of the petiole such as that which occurs at the time of autumn. The process of leaf abscission includes many physical as well as biochemical changes which are majorly regulated by the plant hormones. Leaf abscission inevitably occurs following the process of senescence. It typically involves the formation of an abscission layer at the petiole’s base.

At the early life of a leaf, in comparatively higher concentrations the plant hormone auxin is produced and is transported steadily out of the leaf via the petiole. The process of both senescence and abscission are delayed for as long as the levels of auxin stays high in the leaf and an adequate quantity of hormone is transported across the petiole.

Additionally, cytokinins and gibberellins are secreted at different locations in the plant and passed to the leaves to aid delay this destructive phenomenon. When the leaf matures, the level of the senescence-retarding hormones, auxin specially, decreases.

The abscission layer in most of the species is formed from one or many layers of cells across the petiole’s base. There is an evident increase in the respiration rates of cells of the abscission layer which are in proximity to the stem in the initial stages of abscission. As there is an increase in the respiration rate to render extra energy, ethylene triggers one or more of such cell layers which are in proximity to the stem to grow in size.

In addition to increase in size of such cells, the cells found in the abscission layer far from the stem rises the production of enzymes which disintegrate the polysaccharides in the cell walls. With the production of such enzymes into cell walls, the digestion of cell wall matter initiates.

The pressure generated by the cell expansion in the proximal area of the abscission layer, leading to the two layers disintegrate. Hence, the leaf separates and falls from plants.

Like senescence, abscission is a natural progressive process occurring during the life cycle of majority plants. Even though the process is nearly associated with the normal changes which seasonally occur. Such changes in the environment can intensify abscission.

Plants all across the world are treated with freezing temperatures. Most of plants’ leaves cannot withstand these cold conditions and consequently die at the time of winter. In the event of leaves not being prepared to face such cold weathers by experiencing senescence, the onset of the first freeze season can kill the leaves even before the matter in them could be saved.

In the absence of an abscission process to eliminate the dead leaves, the tissues which have undergone senescence could obscure the new spring growth which surfaces in the upcoming season. As a result, the process of senescence and abscission renders a means by which the perennials could reprocess a major section of the leaf matter as plants ready for both the cold and the upcoming season involving growth.

The process of senescence can be initiated as a result of competition for nutrients from other structures of plants. The force of pull of the nutrients to other parts of the plants such as flowers, roots or even fruits can decrease the quantity of such matter bound for leaves.

The decreased supply of nutrients can reduce the synthetic rates and the total result could be a fall in the main leaf macromolecules such as the chlorophyll, proteins and the nucleic acids.

However, only competition cannot be held responsible for senescence and abscission as even in plants which do not produce fruits, the leaves undergo aging and even loss of leaves. Additionally, research has indicated that leaf senescence can still take place when flowers are eliminated from the plant immediately after it is formed.

This was a brief on abscission. For more related concepts on NEET, visit BYJU’S.