Effect of Temperature on Organisms

The influence and effect of temperature on living entities are in several ways. It has a role in morphology, cells, physiology, growth, behaviour, distribution of animals and plants, development and related aspects. Hence, the temperature is one of the limiting factors which can determine the presence of life on Earth. 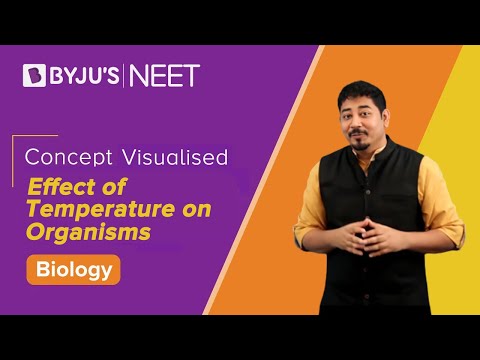 Why is temperature so influential in living entities?

The maximum and minimum temperatures have a harmful effect on the cells and their components. The cell proteins could be destroyed if the condition is freezing or water is lost and electrolytes get concentrated in the cells.

Also, in the event that temperature is not optimum, enzymes can get denatured if extremely high or if too cold, which prevents enzymes from functioning. Hence, it can hinder the normal, day to day activities, biological processes of living entities.

Different Types of Living Entities Based on Temperature Tolerance

Eurythermal entities – such entities can withstand a wide range of temperatures. For instance – dog, tiger, cat

Thermophilic entities – these entities can survive at comparatively higher temperatures, typically not less than 20℃. For example – some species of insects, reef corals etc.

Cryophilic entities – these entities can survive at lower temperatures only. At times it can go as low as 0℃. For instance – salmon, some species of seals, arctic crustaceans.

Extremophiles – Some of the living entities have a high level of tolerance for extreme temperatures. Such species occupy habitats that have extreme conditions. These are referred to as extremophiles.

Behaviour of Endotherms To Temperature

Behaviour of Ectotherms To Temperature

Ectotherms are species that do not regulate their body temperature at constant levels. Several ectothermic animals have a restricted capability to cope with a range of environmental temperatures, which is a result of it changing its body temperature utilizing solar energy.

Such animals absorb sunlight, which causes them to utilize heat to increase the temperature on their outer surface. This temperature then raises their temperature within, thereby causing them to conduct metabolic processes. In several species, their dark colour helps facilitate the absorption of heat. During hot periods, such animals move to shade in order to prevent overheating.

As a result of such animals altering their metabolism with the ambient temperature, they can survive in a wide range of temperatures. But, it remains inactive when it is out of its optimal temperature.

What is the temperature tolerance range?

It is the range of temperature in which the species can survive. It is their tolerance range for temperature and is typically only some degrees outside the range at which an entity is comfortable and favourable to them.

This was a brief on the effect of temperature on entities. Explore more NEET concepts, at BYJU’S.