This is the best oxidizing chemical to use for manganese control removal. As an extremely strong oxidant, it has the additional benefit of producing manganese dioxide during the oxidation reaction. 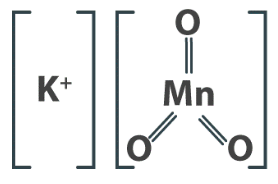 Permanganate can react with a C=C double bond by hydroxylation. Instead of the chain cleavage, hydroxyl groups are added, resulting in a glycol formation.

The reactivity of permanganate with alcohols depends on the location of the hydroxyl group in the molecule.

A reagent commonly used in laboratories for the oxidation of primary alcohol to a carboxylic acid is chromic acid, H2CrO4. Chromic acid is prepared by dissolving either chromium (VI) oxide or potassium dichromate in aqueous sulfuric acid.

Secondary alcohols are oxidized to ketones.

Periodic acid is known to oxidise substances other than carbohydrates to form reactive aldehydes. The amino alcohols of serine and threonine are oxidised by periodic acid but only when present at the end of the protein chain.

Baeyer’s reagent is a dilute alkaline KMnO4 solution, which is purple in colour. In this test the alkene is oxidised to a diol and alkyne is oxidised to carboxylic acids which use up the purple permanganate solution and produces manganese dioxide. This disappearance of purple colour is the indication of the presence of unsaturation or C-C double or triple bonds in molecules. 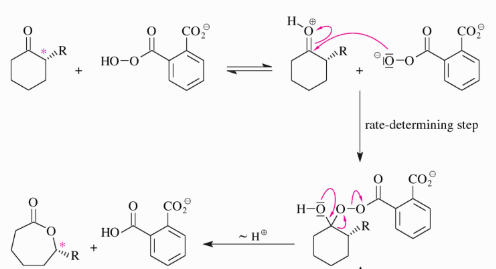 The Baeyer–Villiger Reaction is a commonly used oxidation reaction in organic synthesis is the conversion of carbonyl compounds into the corresponding esters or lactones.

Most searched topics on NEET Chemistry: