The female external genitalia is indeed interesting as it comprises the reproductive and urinary tract structures. Put together, all of these structures are referred to as the vulva. Vulva in simple terms is wrapping or covering. When viewed from the outside, the external female reproductive system does seem to be wrapped or covered by folds of skin, which are nothing but the labia minora and labia majora. These form a part of the vulva.

The external female genitalia serves both reproductive and urinary functions. The parts of the vulva are – 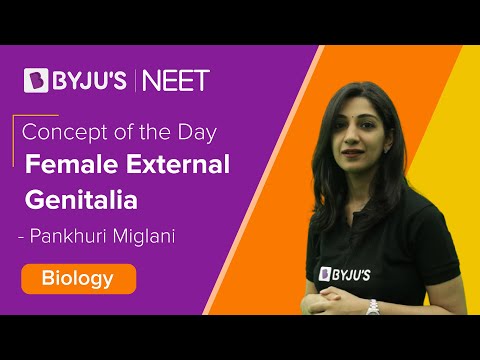 There is an enlargement of the genital swellings forming the labia majora. In between, the urogenital membrane breaks, exposing the lower section of the urogenital sinus or the groove. This groove centrally opens forming the vestibule, urethra and the lower one-third of the vagina. Let’s see more about the structures that make the external female reproductive organs.

This is the round area of the skin on pubic symphysis and the nearby pubic bone. It has hair over it. The mons pubis before puberty is comparatively flat and the labia minora are formed poorly. At the time of adolescence, there is the formation of coarse hair over the mons, the labia minora and labia majora become more flap-like and noticeable. The mons in female adults are covered by rough hair which is restricted above by horizontal bounds. Once menopause takes place, the pubic hair starts thinning and the labial tissue slightly atrophies.

These are two raised longitudinal folds of the skin extending from the mons pubis to the perineum. It forms the lateral margins of the vulva. Each of the labium possesses an external pigmented surface which is covered with hair and a pink, smooth internal surface having large sebaceous follicles.

These are 2 small cutaneous folds lacking fat found between the labia majora lined by nonkeratinized squamous epithelium containing veins, elastic tissues, some smooth muscles and a lot of nerve endings. They obliquely extend from the clitoris down, laterally and back, lining the vaginal orifice.

The function of labia minora is to protect the urethral and vaginal openings from dryness, infections and mechanical irritation.

It opens into the vestibule which is close to 2.5 cm under the clitoris and above the vagina’s opening through a sagittal, short cleft with somewhat risen margins, the urethral meatus. The ducts of the paraurethral glands open on separate sides of the lateral margins of the urethra.

It is found in the posterior end of the vestibule, posterior to the urethral opening. These are guarded incompletely by the septum of the mucous membrane, referred to as the hymen.

It is the cavity found between the labia minora. It comprises the vaginal and external urethral orifice in addition to the openings of the two greater vestibular (Bartholin’s) glands and of the many mucous lesser vestibular glands.

These glands are homologous to the male bulbourethral glands. It comprises two small oval or round, reddish-yellow bodies which line the vaginal orifice at about 4 and 8 o’ clock positions under the bulbospongiosus muscle. Each of them opens into the posterolateral section of the vestibule by a 2 cm duct, which is seen in the groove found between the labia minora and hymen.

The glands comprise tubuloacinar tissue. The secreting cells are columnar which give out alkaline whitish-clear mucus having lubricant properties. It is triggered by sexual arousal. The duct is lined by columnar epithelium, however, close by their opening, it is lined by stratified squamous epithelium. The Bartholin’s gland is enlarged and filled with secretions when it is blocked. This is referred to as the Bartholin’s gland cyst. In case this gets infected and inflamed, the condition is referred to as Bartholin’s abscess.

Bulbs of the Vestibule

These bulbs are found on each side of the vestibule and are two elongated masses of erectile tissue – 3 cm long. It lines the vaginal orifice and fuses anteriorly to them by a constricted commissural bulborum. These are homologous to the bulb of the penis seen in males, but are split to be bilateral. If the posterior ends of the vestibular bulbs are torn in labour, it can lead to severe haemorrhage.

It is an erectile structure enclosed partially by the anterior bifurcated terminals of the labia minora. They have a root, body and a glans. Through the skin, the body can be palpated. It comprises two corpora cavernosa which possesses erectile tissue and is wrapped in dense fibrous tissue. The glans clitoris is round, small tubercles of the spongy erectile tissue found at the end of the body which is associated with the bulbs of the vestibule by fine bands of erectile tissue. These are seen between the anterior terminals of the labia minora. Their epithelium has great cutaneous sensitivity, significant in the sexual responses.

It is the fibromuscular distensible tube that has the lining by non keratinized stratified squamous epithelium. They extend from the vestibule to the cervix. The upper terminal of the vagina, wrapping the vaginal projection of the uterine cervix. The annular recess among the cervix and the vagina is the fornix. The various parts of the recess are provided with different names – posterior, anterior and lateral fornices, however, these are continuous.

The vagina ascends upward and posterior, forming an angle of 45 degrees with the horizontal in the erect form. Vagina’s width increases with ascending. The vaginal mucosa is associated with the uterine cervix on all sides. Approximately, the anterior wall is about 7.5 cm long, the posterior wall is about 9 cm in length. The base of the bladder is associated with the anterior wall of the vagina. This posterior wall is distinguished from the rectum superiorly by the rectouterine pouch and in its middle half by the Denonvilliers’ fascia.

As the ureters anteromedially move to arrive at the fundus of the bladder, it passes near to the lateral fornices at which point each of the ureters is transversely crossed by a uterine artery. Externally, the vagina opens through the introitus whose size varies. They have great distension at the time of parturition and to a lesser extent at the time of sexual intercourse. Just within the vaginal orifice, the hymen is located, which is a fine fold of mucous membrane. The internal surfaces of the folds normally are in contact with one another. The vaginal opening seems like a cleft in between them.

This was a brief on the external genitalia of females. Explore related topics on NEET at BYJU’S.

What is a cervix?

What are the parts that come under vulva?

What is the structure of labia majora?

The two raised longitudinal skin folds that extend from the mons pubis to the perineum are called labia majora. It forms the lateral margins of the vulva. Each of the labium possesses an external pigmented surface which is covered with hair and a pink, smooth internal surface having large sebaceous follicles.

What is the structure of labia minora?

The two small cutaneous folds lacking fat found between the labia majora are called labia minora. They are lined by nonkeratinized squamous epithelium. They obliquely extend from the clitoris down, laterally and back, lining the vaginal orifice.