Pyruvate is the conjugate base of pyruvic acid. It is a key intermediate in many biological processes.

It is produced at the end of the glycolysis process and is the connecting link of various biochemical processes such as gluconeogenesis, fermentation, cellular respiration, fatty acid synthesis, etc.

What is Pyruvic acid?

It is the simplest ɑ-keto acid that has carboxylic acid and ketone as its functional group. When pyruvic acid donates a proton, it forms a conjugate base called pyruvate. Pyruvate is seen as an intermediate in most metabolic pathways. 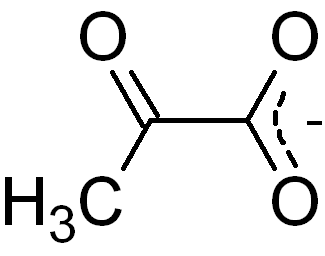 Pyruvate is a key intermediate in various metabolic processes in living organisms.

It is an important topic from the NEET perspective. See below for important metabolic reactions involving pyruvate.

This was a brief note on Pyruvate. Explore notes on Glycolysis and other important concepts related to NEET, only at BYJU’S.

What is the main function of pyruvate?

Pyruvate is produced at the end of the glycolysis process and is a key intermediate in various metabolic pathways such as gluconeogenesis, fermentation, cellular respiration, fatty acid synthesis, etc. Pyruvate provides energy to the living cells through Kreb’s cycle. Pyruvate is first decarboxylated to acetyl CoA and then acetyl CoA enters the Krebs cycle.

How is pyruvate used in the body?

Pyruvate is used in various metabolic pathways. Some of the examples are:

What is pyruvate the product of?

Glucose is converted into pyruvate by a series of reactions through glycolysis. Glycolysis is the first step of cellular respiration.

What is pyruvate also known as?

Pyruvate is the conjugate base of pyruvic acid. It is also known as the a-keto propanoic acid.

Test your Knowledge on Pyruvate!
Q5