What is Azeotropic Mixture?

Normally, we use distillation to isolate materials as the ideal solutions with one part normally more volatile than the other. However, in an azeotropic mixture, since the vapour and fluid concentrations will be the same this approach will prevent their separation.

Two, three and more azeotropes can be either uniform or heterogeneous (more than a phase). Azeotrope usually happens when a mixture is heated in order to produce vapour with the same liquid composition.

If the mixture deviates from Raoult’s Law then azeotropes are formed and for azeotropes bubble point and dew points is the same. Mixtures of non-azeotropic liquids under any circumstances are referred to as azeotropic.

There are different types of azeotropic mixtures that are possible. They are:

Azeotropic mixtures with a higher boiling point in their constitutions are maximum boiling azeotropes. Water boils at 373 K and hydrochloric acid boil at about 188 K,  while azeotropes boil at around 383 K which is a boiling point greater than its constituents. Consider, for example, hydrochloric acid consisting of a weight concentration of approximately twenty per cent and 79 per cent of water.

Similarly, an azeotropic mixture that has a boiling point lesser than its constituents is known as minimum boiling azeotropes. Consider, for example, ethanol consisting of a weight concentration of approximately ninety-five per cent and four per cent of water. Water boils at 373 K, and ethanol boils at about 351.5K, while azeotropes boil at around 351.15 K, suggesting a boiling point lower than its constituents.

4. Azeotropes Based on the Number of Constituents

Boiling a 95% solution of ethanol in water will produce a 95% ethanol vapour. It is not necessary to use distillation to obtain higher ethanol concentrations. Alcohol and water are miscible, making it possible to combine any quantity of ethanol with any quantity to produce a homogeneous solution that works like an azeotrope.

On the other side, chloroform and water make up a heteroazeotrope. These two liquids are separated by a mix that comes mainly from the top layer of the water, with a small amount of chloroform being dissolved and a small amount of water dissolved from the chloroform base layer. The mixture can be streamed at a lower temperature when the two layers are heated together as the boiling water or chloroform. The resultant vapour would be 97% chloroform and 3% water, irrespective of the liquid ratio. The condensation of vapours contributes to fixed layers of composition. The upper layer comprises 4.4 per cent of thickness, while the lower condensate layer contains 95.6 per cent.

We do not use fractional distillation to isolate an azeotrope component. There are different types of distillation methods that are used. They are as follows.

A minimum-boiling azeotrope may be produced by adding a compound forming an azeotrope (trainer), which can not be differentiated by the conventional distillation, in an established azeotropic or closely boiling mixture. The oxidation of alcohol is one example. A minimum boiling azeotrope is produced by ethanol, which means that ethanol can not fully be dehydrated by modern distillation. Benzene produces ethanol and a water ternary azeotrope that boils at a lower temperature to remove the surface water (with ethanol) and so leaves dry ethanol to the floor.

In some situations, as in the processing of esters, an azeotrope that occurs within the system can be beneficially used to purify a compound. Alcohol esterification is a reversible reaction. The reaction will not be completed in the presence of the product as the equilibrium is reduced. If one of the components is extracted (in this case water) using water/alcohol azeotrope (nearly all alcohols form azeotropes with water from C2 to C20) the reaction is guided in favour of the ester component.

As can be seen, infinity approaches the number of trays needed asymptotically and separation becomes impossible as unification approaches relative volatility. The existence of a pinch point contributes to relative unity uncertainty. Due to numerous separation phases, pinch forming components are technically feasible but often not economical. 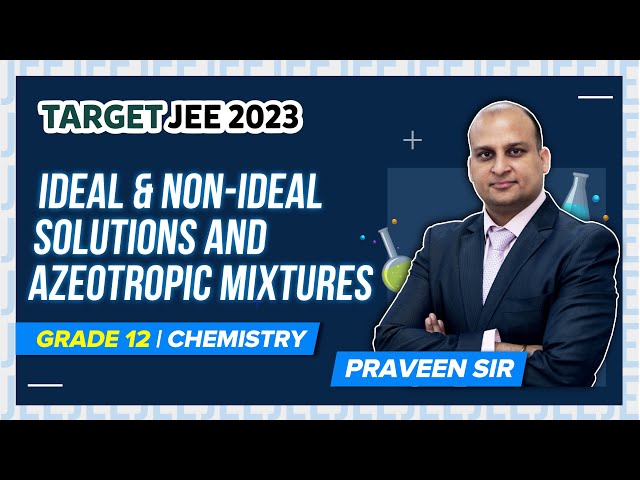 What is meant by azeotropic mixture?

An azeotropic mixture is a mixture of liquids that has a constant boiling point due to the same composition of the vapour and liquid phase.

Give an example of a negative azeotrope.

The separation of water and isobutanol is an example of the azeotrope.

What is meant by heterogeneous azeotrope?

Heterogeneous azeotrope is an azeotrope that consists of liquids that are not miscible with each other.

What is meant by homogeneous azeotrope?

A homogeneous azeotrope is an azeotrope that consists of liquids that are miscible with each other.
Test your Knowledge on Azeotropic Mixture
Q5