It is said that, if one could estimate the amount of sulfuric acid produced in a country, then that information is more than enough to estimate the industrial growth of that particular country. This is because sulfuric acid is an essential raw material for almost everything that is industrially made. It is commonly used in fertilizer manufacturing, oil refining, mineral processing and it is even used in wastewater processing. Some other uses include domestic acidic drain cleaners, the electrolyte in lead-acid batteries, as a dehydrating agent, etc.

Having said that, one of the most popular or common methods to manufacture sulphuric acid is via the contact process. This process was invented by a British merchant named Peregrine Phillips. It was patented in the year 1831. Apart from being an economical process for manufacturing sulfuric acid, sulfur trioxide and oleum are also obtained from this process. We will be learning more about the contact process in this lesson.

In a nutshell, sulfuric acid is a strong mineral acid characterized by its strong dehydrating and oxidizing nature. It has a chemical formula H2SO4. This acid is colourless with a pungent smell. It is soluble in water and releases heat on contact. On top of that, this acid is corrosive to metals and most other organic matters like tissue, wood, etc. On contact with such organic substances, sulfuric acid instantly dehydrates them causing char to form. Sulfuric acid has a density of 1.83 g / cm3.

The molecular structure of sulfuric acid is represented below in the form of a line-wedge-dash structure.

Properties of sulphuric acid are listed below:

Generally, there are several ways to manufacture sulfuric acid. Each of them varies in effort, cost, and purity of the sulfuric acid that is produced. However, the most common process among these is the contact process. Let us discuss this process in detail below.

The manufacture of sulfuric acid using contact process involves four steps. These include;

Pure sulfur is required for the production of sulfur dioxide gas. There are many sources for extracting sulfur. The most important one among these is the recovery from natural gas and oil. The organic or mineral parts of these are removed to obtain sulfur.

Apart from the extraction of pure sulfur, there are few ways by which sulfur dioxide can be extracted. Metal refining is one of them. Many metal ores occur as sulfides in the soil. Later they are roasted to obtain their respective oxide and sulfur dioxide.

Consider the extraction process of lead:

Likewise, sulfur dioxide can be obtained from the metallurgy of copper, nickel, zink, etc. In China, most of the sulfur dioxide is extracted from pyrite, an iron sulfide ore.

Sulfur dioxide can be prepared by burning pure sulfur in the presence of excess air. This causes the formation of dioxide of sulfur. The process of sulfur dioxide preparation is as follows:

The chemical reaction involved in this process is shown below:

This is a really delicate step in the contact process. This is partly because it produces corrosive sulfur trioxide. And also this process is a reversible reaction and hence involves setting different reaction parameters to obtain maximum output. The reaction equation is represented below:

The detailed steps involved are pictured below:

Sulfur dioxide and oxygen are combined at a ratio of 1:1 inside a lead chamber. The temperature is set to 400 – 450 degrees Celcius with 1 to 2 atm. The process is catalyzed by the vanadium pentoxide catalyst.

The accepted method is to dilute the sulfur trioxide in sulfuric acid. This produces oleum.

Oleum can be further diluted in water to obtain concentrated sulfuric acid.

These are the steps involved in producing sulfuric acid via the contact process. 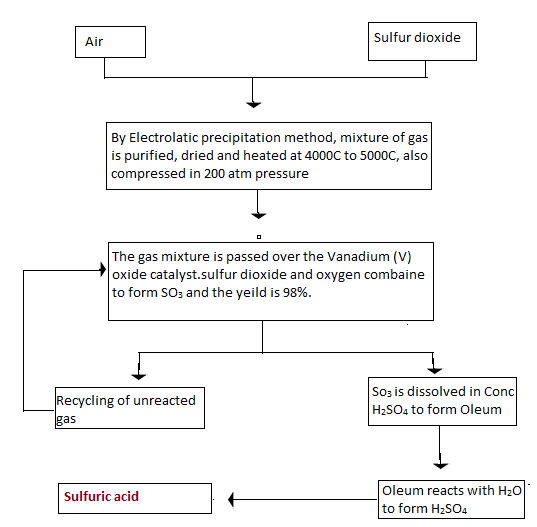 A 1:1 proportion of sulfur dioxide and oxygen is used. From the equation, we can see that there is always an excess in oxygen if we use this ratio. According to Le’ Chatelier’s principle, if the amount of reactant becomes high, the equilibrium will tip towards the product side. Since the amount of oxygen is always higher in the reactant side, the reaction will yield sulfur trioxide.

This reaction is exothermic in nature as shown:

Hence, according to Le’ Chateliers’ principle, a lower temperature yields more sulfur trioxide. However, it is not a feasible way to reduce the temperature too low. Some heat is always required for keeping the rate of reaction to the required level. Hence, most often an optimum temperature of 400 – 450 degrees celsius is selected.

From the equation, we can see that on the reactant side, there are three reactant molecules and on the product side only two. That means the application of excess pressure favours the production of more sulfur trioxide. That is, the equilibrium will tip towards the product side.

According to Le Chataliers’ principle, the excess pressure causes the system to yield more products so that finally the pressure can subside by reducing the number of molecules from three to two. However, a low value of pressure generally 1 – 2 atm is preferred due to safety and economic concerns.

The catalyst used in the contact process is vanadium pentoxide. The action of catalyst is not to yield more product but to make the reaction faster by forcing the reaction to reach equilibrium quickly. Nonetheless, the plant is designed in a manner to not let the reaction stay in equilibrium.