Gravitational Pull of The Earth-Escape Velocity 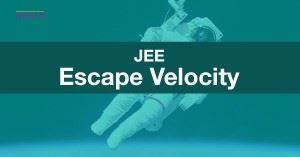 By definition, escape velocity is the minimum velocity an object must acquire to escape the gravitational pull of the earth without falling back. The concept of escape velocity has huge significance in the field of space science. So let us delve into this a little deeper.

We know, that if we throw a body upwards, it falls back after rising for a while by the gravitational pull of the earth. Gravity decelerates the body progressively at the rate of g m/s² (acceleration due to gravity) until its velocity becomes 0 at the highest point. After exhausting its initial upward velocity, the body begins to now accelerate at the rate g but downwards i.e. towards the surface of the earth and falls back.

However, if we were to impart sufficient velocity to the body such that the body crosses the gravitational field of the earth without exhausting its velocity, it would be able to escape into space.

How To Calculate Escape Velocity?

A good way to calculate the escape velocity is to use the principle of conservation of energy.

If the earth’s gravitational field extends to a height, h above the earth’s surface, body’s potential energy at that height would be.

where G is the universal Gravitational constant

M is the mass of the earth

and R is the radius of the earth.

Since, h<<R, we can simplify the potential energy to the following expression.

Let’s say the escape velocity of the body is v. The body must have greater energy than its gravitational binding energy.

As you can see, this velocity is independent of the mass of the body and therefore, the same for all bodies. On putting the values of G, M, R in the expression, we get

Test Your Knowledge On Gravitational Pull Of The Earth Escape Velocity!
Q5