Definition: The meaning of hysteresis is”lagging”.  Hysteresis is characterized as a lag of magnetic flux density (B) behind the magnetic field strength (H).

Systems that show hysteresis are usually nonlinear. So this can be mathematically challenging to some hysteretic models such as the Preisach model and the Bouc–Wen model. Additionally, there are models such as phenomenological models for specific phenomena such as the Jiles–Atherton model that is used to describe ferromagnetism.

There are two types of hysteresis; 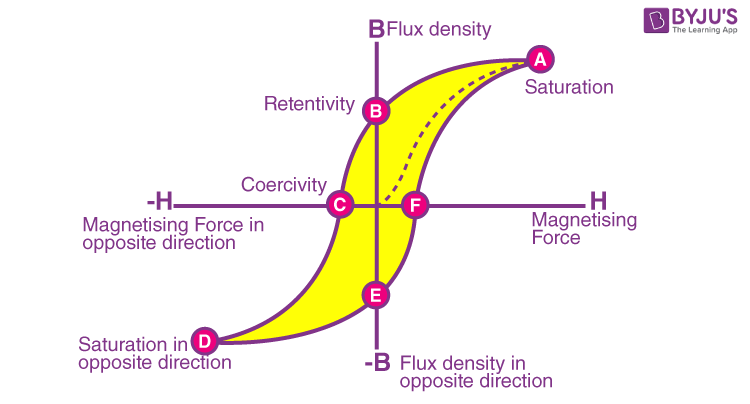 Looking at the graph, if B is measured for various values of H and if the results are plotted in graphic forms then the graph will show a hysteresis loop.

1. A smaller region of the hysteresis loop is indicative of less loss of hysteresis.

2. Hysteresis loop provides a substance with the importance of retentivity and coercivity. Therefore the way to select the right material to make a permanent magnet is made simpler by the heart of machines.

3. Residual magnetism can be calculated from the B-H graph and it is, therefore, simple to choose material for electromagnets.

The amount of magnetization present when the external magnetizing field is removed is known as retentivity.

The amount of reverse(-ve H) external magnetizing field required to completely demagnetize the substance is known as coercivity of substance.

The value of H at point c in the hysteresis loop.

In essence, hysteresis is encountered in many different areas of science and has a lot of uses.

Energy Loss due to Hysteresis

Difference between the soft magnet and hard magnet

In magnetic materials, what is hysteresis?

When an external magnetic field is introduced to a ferromagnet substance like iron, the atomic dipoles align themselves with it, this is known as magnetic hysteresis. Part of the alignment will be kept even if the field is removed; the substance has become magnetic. The magnet will remain magnetised indefinitely once it has been magnetised.

How can hysteresis be reduced?

Retentivity is the property of a magnetic substance to retain magnetism in the absence of a magnetising field.

Test Your Knowledge On Hysteresis!
Q5