Relative motion is a combined property of the object under study as well as the observer. There is no such thing like absolute motion or absolute rest. Motion is always defined with respect to an observer or reference frame. Having said that, here in this page students will find a list of relative motion formulas which will further boost their revision before the entrance exams.

Relative Motion in One Dimension

Here and are the velocity w.r.t to ground

It is the rate at which relative velocity is changing

4. Equation of motion (if relative acceleration is constant) 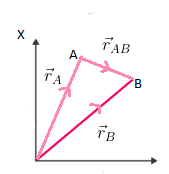 here,  are position vector of A and B w.r.t origin

Here , are the velocity w.r.t to ground

Here , are the acceleration w.r.t to ground 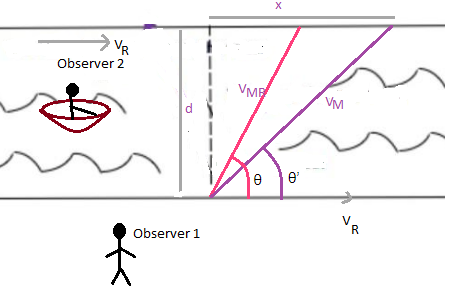 It is defined as the displacement of the man in the direction of the river flow. In the figure above x is the drift.

2. Crossing the river in the shortest time

3. Crossing the river in the shortest path, Minimum drift

The minimum possible drift is zero. In this case, the man swims in the direction perpendicular to the river flow as seen from the ground. This path is known as the shortest path. For minimum drift, the man must swim at some angle Φ with the perpendicular in a backward direction, which is given by sin Φ = VR/VMR

Time to cross the river along the shortest path

The velocity of the aeroplane with respect to the wind is

Here is the aeroplane w.r.t the ground,

is the velocity of the wind.

The rain is falling vertically with a velocity VR and the observer is moving horizontally with velocity VM, the velocity of rain relative to an observer will be

Up Next: Important Work, Power and Energy Formulas For JEE