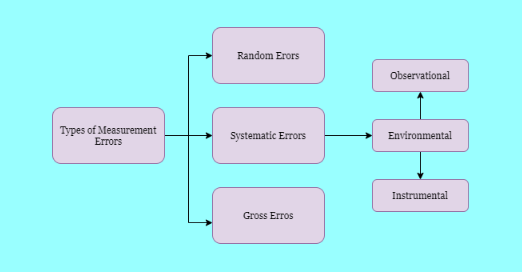 The measurement errors can be classified majorly in three different kinds:

These are not determined by chances but occur due to inaccuracies that are inherent in the system. They are also defined as the error with a non-zero mean, the effect of which is not reduced when the average of the values is being taken into consideration. They are sometimes referred to as Statistical bias. In general, they are constant are predictable w.r.t. to the true value.

The gross error arises mainly due to human mistakes or it can also be said to be physical errors. For instance, a person takes the wrong measurement or reading while using an instrument. Incorrect data is recorded and this results in gross error. It can be avoided by being careful and making sure that the reading that is taken is correct. Additionally, two or more readings can be taken of the measurement quantity.

The estimation of an error interval gives the absolute error associated with the instrument.

Type A and Type B Evaluation Of Uncertainty

Type A measurement takes into account that the knowledge of an input quantity is taken only after considering repeated measured values. This process is called type A evaluation of uncertainty. Here we consider repeated values for measurement in input, or in other words, we consider the Gaussian distribution.

On the other hand, type B measurement takes into account the scientific judgement or other information concerning the possible values of the quantity. We can term this as a Type B evaluation of Uncertainty. Here, the information that is available to us is often the value that lies in a specified interval. Here, the concept of a rectangular probability distribution with limits is used.

There are certain methods that are adopted to assess the measurement error which include:

Standard Error of Measurement (SEM): It tells about the deviations or true values of how an instrument when used for multiple times produces the desired output.

Coefficient of Variation (CV): it is defined as how the values vary on repeated measurements. If the CV is low in value implies the results are closer to the true value.

Limits Of Agreement (LOA): it gives the estimate of the interval where a proportion of the differences lie between the measurements.

Other Types of Errors

There are various types of errors that can happen in our common day to day life. Some of these are:

Absolute Error: It is defined as the amount of error in the measurement. For example, we have a sack whose actual weight is said to be 100 kg. Suppose in a weighing machine, the sack weighs out to be 150 kgs, then there is a 50 kg error difference associated with the weighing machine. This associated error of the machine is referred to as Absolute Error.

Greatest Possible Error: It is the error which is defined to be one half of a measuring unit.

Operator Error: The errors that are caused by the operator is called an operating error. For e.g. in an experiment to be conducted in the lab, a man notes the voltmeter to read 5 volts, where it actually was 4 V. then the error caused on the measurement would be due to the man who observed the value. Thus, such type of errors is commonly referred to as operator error. They are also called as personal errors.

Measurement Location Error: The errors that are caused by the instrument that is kept at a location in which it was not bound to be kept is called Measurement Location Error. For example, take the case of a thermometer, which is told to be kept away from the sun. Suppose the thermometer is placed on the reach of sunlight, and then after the values noted using that particular thermometer, there are chances of the error to occur. Such cumulative errors are broadly classified under this category.

Parallax Error: Due to wrong sides of measurement be taken. Always take readings by standing straight in front of the instrument and not from its sides.

External Error: The errors that are caused due to external factors like wind, environment, etc. contribute to External errors.

Relative Error: It is defined as the ratio of the absolute error to the measured value.

A resistor is marked in a laboratory with the specifications 100 ohms, 10 %. Find the true value of the resistor?