Buffer action in general is defined as the ability of the buffer solution to resist the changes in pH value when a small amount of an acid or a base is added to it.

The salt exists completely as ions.

Here the ethanoic acid will only be slightly dissociated in the form CH3COOH. What it means is that it will not contribute any H+ ion. Therefore, the pH of the resulting solution will remain more or less constant. The added H+ ions are also removed due to which there is no appreciable decrease in pH.

The reaction comes to a completion as CH3COOH is a weak acid whose ions have a strong tendency to form non-ionized CH3COOH molecules. On the other hand, if we add a strong base the OH– ion gets neutralized by the reaction with the acid in the buffer,

We can also consider that the OH– ion can react with the H+ ion in order to form water. The OH– ions are that are added are removed wherein the acid equilibrium shifts to the right to replace the H+ ions that are exhausted. This results in a minor change in the pH value.

Alternatively, if we add a drop of NaOH, the OH– ions react with the free acid to give undissociated water molecules. The extra OH– ions of the base are neutralized. As a result, the pH of the solution remains the same. This condition or the resistance offered by the pH when a base is added is known as reserve acidity. This is mainly due to CH3COOH.

If we add a strong base, the acid present in the buffer neutralizes the hydroxide ions (OH–).

So we can say when acid or base is added its effect is practically balanced and the pH of the solution is always constant.

If we take a solution, the salt will be completely ionized and the weak acid is partly ionized.

On Addition of Acid and Base

1. When acid is added, the protons of acid that are released will be removed by the acetate ions to form an acetic acid molecule.

2. When a base is added, the hydroxide that is released by the base will be removed by the hydrogen ions to form water. 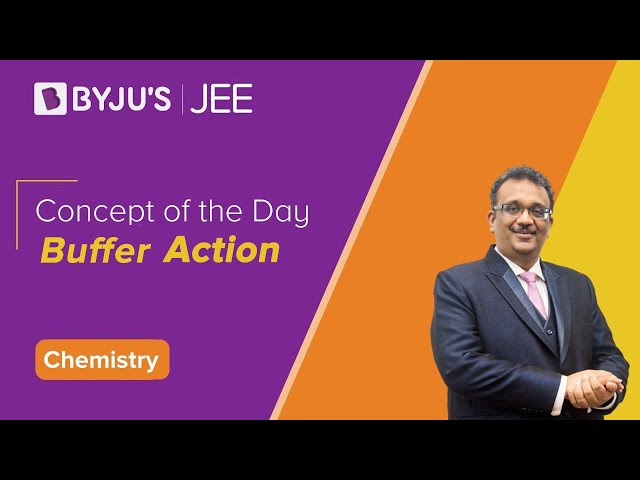 What is the buffer action of blood?

Blood has a pH between 7.35 and 7.45. To maintain this pH, a buffer of bicarbonate anion (HCO3–) and carbonic acid (H2CO3) is present in the blood. This buffer maintains the pH of the blood and resists any radical change in pH.

What are the characteristics of a buffer?

The characteristics of a buffer are:
On dilution, there is no change in the pH value of the buffer.
A buffer has a definite pH value.
The pH of a buffer does not change with the addition of a small amount of base or acid.

What are the two types of buffers?

Acidic buffer and basic buffer are the two types of buffer solutions.

How are the acidic buffer and basic buffer prepared?