Dielectrics, in general, can be described as materials that are very poor conductors of electric current. They are basically insulators and contain no free electron. Dielectrics can be easily polarized when an electric field is applied to it. Thus, their behaviour in an electric field is entirely different from that of conductors as would be clear from the following discussion.

With respect to the atomic view, dielectric materials are classified into two categories.

Polar and Non-polar Molecules helps us to understand the dielectric behaviour in an electric field.

In the water molecule, two O-H bonds are not placed opposite to each other (unlike the CO2 molecule) but are inclined at an angle of about 105°. The hydrogen ion forms a dipole moment with each of the oxygen ion, and there is a net dipole moment [Fig. (a)].

(i) In the absence of an electric field, the electric dipole moments of these polar molecules point in random directions [Fig. (b)] and cancel each other. Therefore, even though each molecule has a dipole moment, the average moment per unit volume is zero. 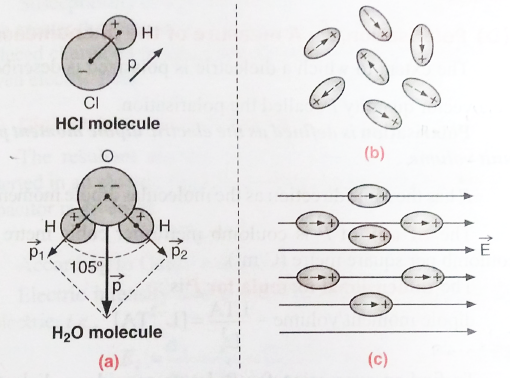 In a molecule of CO2, the oxygen ions are symmetrically placed with respect to the carbon ion, hence the dipole moment is zero [Figure (a)]. If the molecule is placed in an electric field along the line joining the ions, the oxygen ions get displaced with respect to the carbon ion and the net dipole moment induced is along the direction of [Figure. (b)]. If the electric field is applied perpendicular to the line joining the ions, the directions of the induced dipole moment is again along the field as shown in figure (c). 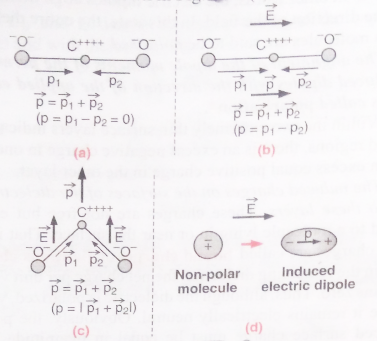 In CCl4, the external electric field changes the orientation of the C-Cl bond and thus produces induced dipole moment.

A dielectric may be made up of polar or non-polar molecules. But the net effect of an external field is almost the same, i.e., the external field will compel the molecules to align their dipole moments along its own direction. The alignment of the dipole moments of the permanent or induced dipoles with the direction of the applied electric field is called polarisation.

Within the two extremely thin surface layers indicated by shaded regions, there is an excess negative charge in one layer and an excess equal positive charge in the other layer.

The induced charges on the surfaces of the dielectric are due to these layers. These charges are not free but each is bound to a molecule lying in or near the surface. That is why these charges are called bound charges or fictitious charges. Within the remaining dielectric, the net charge per unit volume remains zero. Thus, although the dielectric is polarized, yet as a whole, it remains electrically neutral.

Polarisation can thus also be thought of as a phenomenon in which an alignment of positive and negative charges takes place within the dielectric resulting in no net increase in the charge of the dielectric.

The extent to which a dielectric is polarized is described by a vector quantity called the polarisation.

Meanwhile, polarisation is defined as the electric dipole moment per unit volume.

has the same direction as the molecular dipole moment.

The SI unit of is coulomb metre per cubic metre or coulomb per square metre (C/m2).

The dimensional formula for P is:

To find an expression for let us consider a dielectric slab of surface area ‘A’ and thickness ‘d’ . Let this slab completely fill the space between the plates A and B of a parallel-plate capacitor, having charges +q and –q. Let –qi and +qi be the induced charges on the surfaces of the slab opposite to A and B respectively as shown in the figure.

The polarised slab can be considered as a single dipole consisting of the induced charges –qi and +qi at the opposite faces separated by a distance equal to the thickness of the slab. The dielectric slab fills the entire space between the plates. A small gap left between its surfaces and those of the plates is only for the sake of clarity. 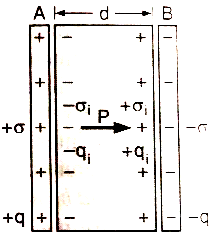 Where surface density (charge per unit area) of the induced charge. Obviously:

It is found that in most dielectrics (except certain types of crystals, called ferroelectrics), the polarisation P is directly proportional to the resultant electric field E in the dielectric. That is,

Where is a constant of proportionality and is called the electric susceptibility of the dielectric.

The multiplicative factor is used to keep dimensionless.

The susceptibility of vacuum is zero. This is due to the reason that in a vacuum there are no molecules whose charges can be displaced by an electric field.

Electric Field Inside a Dielectric

Let us consider a dielectric slab in a uniform electric field of intensity due to a pair of oppositely charged plane plates of a parallel-plate capacitor [figure (a)]. Under the influence of this field, the dielectric slab is polarised and induced charges appear on the surfaces of the slab which are opposite to those on the plates as shown in figure (b). 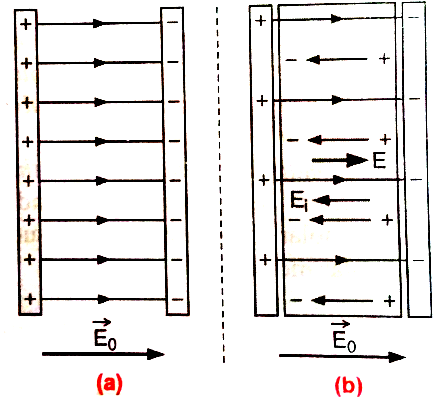 The field in the dielectric is only weakened and never completely cancelled. This is due to the fact that the charges in the dielectric are not free to move beyond a particular distance and as such, these are not displaced to such an extent that the induced field is equal to the applied field. We find that though a steady current cannot pass through an insulator, an electric field can. That is the reason for calling insulators as dielectrics. Dielectric means transmitting electric effects without conducting.

(a) Induced charge or Bound charge

If which is the case when there is no dielectric.

For a conducting slab,

According to Gauss’s theorem:

Electric intensity due to induced surface charges on the dielectric, i.e.,

The quantity is a constant for the dielectric and is called relative permittivity or dielectric constant. It is denoted by Thus:

The electric field is weakened by introducing a dielectric slab between the plates of a charged parallel-plate capacitor.

If V0 is the potential difference between the plates of the capacitor without dielectric and V with dielectric, then

If C0 and C denote the capacitances of the capacitor without and with dielectric, then

The capacitance of a capacitor increases if a dielectric is placed between its plates.

The maximum potential gradient that can exist in a material without its electrical breakdown is called its dielectric strength.

Effect of Dielectrics in Capacitors

Let a dielectric slab of thickness t be introduced between the plates of the capacitor which are at a distance d apart as shown in the figure.

If no dielectric is present, the pd is given by

When the dielectric slab is present, the pd is given by 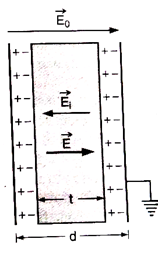 It is obvious that C > C0. Thus, the presence of a dielectric slab between the plates of a capacitor increases its capacitance.

Let a conducting slab of thickness t be introduced between the plates of the capacitor which are at a distance d apart [Figure]. Here, E0 is the external (i.e., applied) electric field and E is the resultant electric field inside the slab. 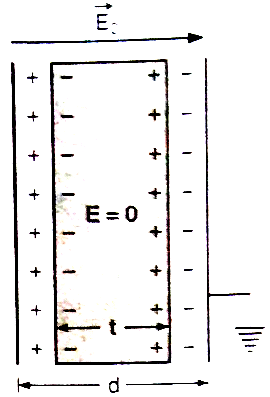 If no conducting slab is present, the pd is given by;

When the conducting slab is present, the pd is given by

Let C and C0 be the values of the capacitance with and without the conducting slab respectively between its plates.

It is obvious that C > C0. Thus, the presence of a conducting slab between the plates of a capacitor also increases the capacitance of the capacitor.

Test Your Knowledge on Dielectrics
Q5 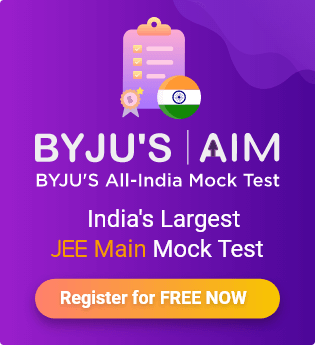