Ethers are a class of organic compounds that mostly contain an ether group wherein the oxygen atom is bonded to two alkyl or aryl groups. The word Ether has been derived from the Latin word ‘aether’ which means ‘to ignite’. At room temperature and under a high-pressure ethers are usually flammable. The general formula of ether is given as R-O-R, R-O-R’, R-O-Ar or Ar-O-Ar where R represents an alkyl group and Ar represents an aryl group.

We generally come across this topic in organic chemistry and it is also a widely covered topic in biochemistry where we find common linkages between carbohydrates and lignin. Meanwhile, if we look at the structure of ethers they basically feature bent C–O–C linkages.

The above figure represents the general structure of an ether. You can see that ether is mainly characterized by an oxygen atom that is bonded to two alkyl or aryl groups, represented here by R and R’. The substituents can be the same or different.

Below we have given a few ethers examples.

3. Cyclic ethers such as 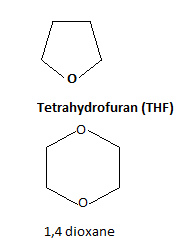 Dimethyl ether and ethyl methyl ether are both gases at room temperature. Other lower homologues are colourless, pleasant smelling, volatile liquids with a typical ether smell.

1) Dipole moment: C-O-C bond angle is not 180°, dipole moments of the two C-O bonds do not cancel each other and thus ethers possess a small net dipole moment.

3) Solubility: The solubility of ethers with water resembles those of alcohols of comparable molecular mass. Ether molecules are soluble in water. This is because of the fact that like alcohol, oxygen atoms of ether can also form hydrogen bonds with a water molecule. Also, solubility decreases with an increase in carbon atoms. This is because the relative increase in hydrocarbon content of the molecule decreases the tendency of H-bond formation.

5) Hybridization: In ethers, the oxygen atom is sp3 hybridized with a bond angle of 109.50.

Asymmetrical ethers are those where two different groups are attached to the oxygen atom.

Note: Ether does not possess a hydroxyl group, unlike alcohols and phenols.

Ethers are named simply by the names of two alkyl/aryl groups bonded to oxygen and add the word ‘ether’. Those alkyl groups are listed in alphabetical order.

If only one alkyl/aryl group is shown in the name of a particular ether, it implies two identical groups, as in ethyl ether for diethyl ether. Naming for ethers adopted by IUPAC uses a more complex group as the root name, with the oxygen atom and the smaller group named as an alkoxy substituent. Thus, in IUPAC systems, ethers are alkoxy alkanes.

Rule 1:  Select the longest carbon chain as the base chain and give the base name.

Rule 2: Change the name of the other hydrocarbon group ends with ‘yl’ change into ‘oxy’.

Rule 3: Alkoxy name is placed with a locator number in front of the base chain name.

Ethers can be prepared or synthesized in a number of ways. The most common industrial methods for preparing ethers are:

Alcohol undergoes dehydration in the presence of protic acids (sulphuric acid, phosphoric acid) to produce alkenes and ethers under different conditions. The formation of the reaction product depends on the reaction conditions.

The formation of ethers by dehydration of an alcohol is a nucleophilic bimolecular reaction. That is, here the alcohol acts as a nucleophile which means it involves the attack of alcohol molecule on a protonated alcohol as shown below

This method is used for the preparation of ethers having primary alkyl groups. To synthesize ethers in this way, the alkyl group should be unhindered and must be kept at a low temperature or else the reaction will give rise to alkenes.

This is an important method for the preparation of symmetrical and asymmetrical ethers in laboratories. In Williamson synthesis, an alkyl halide is made to react with sodium alkoxide which leads to the formation of ether.

This reaction involves an SN2 attack of an alkoxide ion on an alkyl halide. We know that alkoxides are very strong bases and they react steadily with alkyl halides and thus they take part in elimination reactions.

When alkyl halide is treated with dry silver oxide, ether is produced

Of all the functional groups, ethers are the least reactive ones. Ether bonds are quite stable towards bases, oxidizing agents and reducing agents. But on the other hand, ethers undergo cleavage by reaction with acids. The prominent chemical reactions of ethers are as follows;

Cleavage Of C-o Bonds In Ethers

Cleavage of C-O bonds in ether takes place in excess hydrogen halide (which are acidic) under extreme conditions like in concentrated acids (usually HBr and HI) and high temperatures.

When ether is exposed to air in the presence of UV light or sunlight peroxide linkage will be formed.

Some of the different types of electrophilic substitution reactions include:

Alkyl groups undergo a substitution reaction with halides such as chlorine and bromine. This reaction yields halogenated ether in the absence of sunlight. In the presence of sunlight, it constitutes all the hydrogen atoms of ethers. In the benzene ring, phenyl alkyl ethers undergo usual halogenation. Example: anisole undergoes bromination with bromine in ethanoic acid even in the absence of iron (III) bromide catalyst. This occurs because of the activation of the benzene ring by the methoxy group. Para isomer is obtained in 90% yield.

These are a couple of reactions created by Charles Friedel and James Crafts in 1877 to attach substituents to aromatic rings. These reactions are of two types:

Friedel-Crafts alkylation involves the alkylation of anisole with alkyl chloride and anhydrous aluminium chloride (a Lewis acid) as a catalyst.

This reaction involves the acylation of anisole with an acyl chloride in the presence of anhydrous aluminium chloride as a catalyst.

Both these reactions follow the electrophilic substitution reaction. To be precise, in both these reactions, the alkyl and acyl groups are introduced at ortho and para positions by reaction with an alkyl halide and acyl halide in the presence of anhydrous aluminium chloride.

Some of the important ethers are: 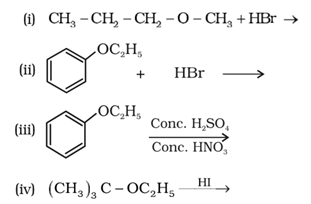 Test Your Knowledge On Ethers!
Q5