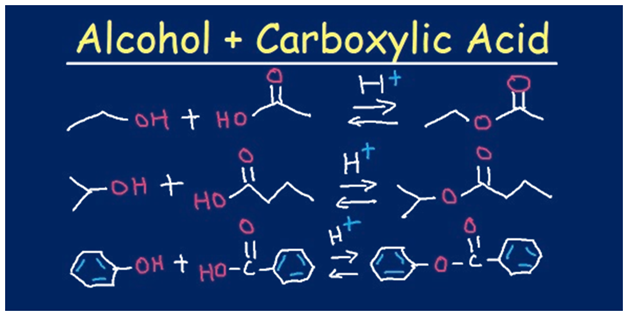 The group of chemical compounds which are formed by bonding of an alcohol group with a group of organic acids, by losing water molecules is called as Esters. Esters are polar in nature but not more than alcohols. These chemical compounds participate in the formation of hydrogen bonds as the acceptors of hydrogen-bond, but they cannot act as the hydrogen-bond donors. This ability to participate in the hydrogen bonding benefits some water-solubility.

These esters are made from the carboxylic acids and alcohols. The alcohol and carboxylic acid are heated in the presence of some catalyst, generally being concentrated sulphuric acid. This is a form of the condensation reaction, in which two or more molecules join together forming up one larger molecule called the ester and the smaller kind of molecule, usually being water.

Mechanism Of Formation Of Esters From Carboxylic Acids

Esters are formed when the carboxylic acid is heated with the alcohol in the presence of a catalyst. In this reaction, the concentrated sulphuric acid is used as a catalyst, dry form of hydrogen chloride gas is used in some cases. This method of reaction is used to convert alcohols into an ester. This reaction does not work for the compounds containing the OH- Group directly attached to the benzene ring. This method of reaction is called Esterification Reaction.

This is a reversible and a slow reaction. When the carboxylic acid is added with catalyst and an alcohol, an ester is formed along with the water. This is called as Fischer esterification.

The reaction can also be written as –

The reaction is said to be in equilibrium. The alcohol is usually used as the solvent so it is present in large quantities. Many of the different acids can also be used; the commonly used ones are the H2SO4 (sulphuric acid) and the TsOH (toxic acid).

Carboxylic acids and the alcohols are warmed together in the presence of few drops of the concentrated sulphuric acid to observe the smell of formed esters. The acid catalyst in the reaction is known to serve for two reasons- It makes the carbon atom of the carbonyl group a good electrophile and allows the loss of water as a part of the leaving group.

Test Your Knowledge On Formation Of Esters!
Q5