Hooke’s law also referred to as the law of elasticity was discovered by an English scientist named Robert Hooke in the year 1660. Hooke’s law basically states that “when an object has a relatively small deformation the size of the deformation is directly proportional to the deforming load or force.”

Besides, Hooke’s law is a great example to describe the property of elasticity – which is a tendency of an object or material to be restored to its original shape after some form of distortion. The ability to return to a normal or original shape can be described as a “restoring force”. Explained more clearly by Hooke’s Law, this restoring force is said to be proportional to the “stretch” that is experienced.

Hooke’s law can be usually taken as a first-order linear approximation only to the response that springs and other elastic bodies offer when force is applied. The law will eventually fail after certain conditions. It fails usually when the forces exceed some limit, the material reaches its minimum compressibility size or its maximum stretching size. Alternatively, there will also be some permanent deformation or change of state once the thresholds are crossed. In fact, some of the materials will mostly start deviating from Hooke’s law much before those limits are met.

Meanwhile, we can also say that Hooke’s law is an accurate approximation for most solid bodies. However, this will mainly depend on the forces and deformations wherein they should be very small. As a result, Hooke’s law is used in many different branches of science and engineering. It is also the foundation of many disciplines such as molecular mechanics, seismology and acoustics. This law is further the most fundamental principle behind the galvanometer, spring scale, manometer and balance wheel of a mechanical clock.

When a material behaves elastically and exhibits a linear relationship between stress and strain, it is called linearly elastic material. In this case, stress is directly proportional to strain.

You can say that “for small deformation, stress is directly proportional to strain”

Therefore, in simple terms, Hooke’s law states that the strain in a solid is proportional to the applied stress within the elastic limit of that solid. 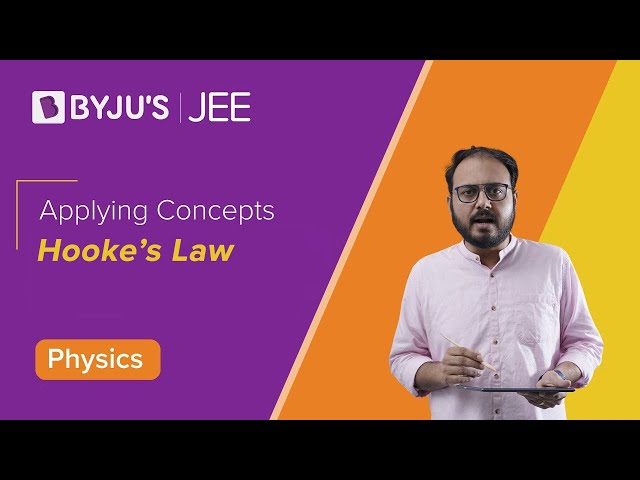 Hooke’s equation holds in many situations where an elastic body is deformed. The instances may include the wind blowing on a tall building or a musician playing the guitar. The equation is said to be linear-elastic or Hookean usually for an elastic body or material.

Hooke’s Law Equation in Terms of Stress and Strain

According to this law, within the elastic limit, stress is proportional to the strain. Thus, Hooke’s Law equation can be expressed in terms of stress and strain;

σ is the stress,

ε is the strain.

In SI units, the spring constant k, and each element of the tensor κ, is measured using units such as newtons per meter (N/m), or kilograms per second squared (kg/s2).

Mathematically, Hooke’s law states that the applied force F equals a constant k, into the displacement or change in length x, or F = kx. The value of k depends not only on the kind of elastic material under consideration but also on its dimensions and shape.

Now, consider the elasticity in only one dimension. To verify Hook’s Law on this spring-mass system we need to find the relation between the restoring force and stretch (elongation) for a spring. As we know, the restoring force is proportional to the magnitude of the deformation. This restoring force can be written mathematically as;

This expression for Hooke’s Law is also known as the spring constant formula.

x represents the magnitude of the distortion or displacement from equilibrium as exhibited in the stretching of a spring or rubber band.

k is the proportionality constant, also known as the spring constant.

Hooke’s spring law is also applicable to different types of elastic material or object with random complexity. However, this will depend on whether the stress and deformation can be represented by a single number. This number can be either positive and negative.

For instance, if we take a rubber block and attach it to two plates (kept in parallel) is distorted by shearing. So, the shearing force Fs and the sideways displacement of the plates x follow or adhere to Hooke’s law (small deformations).

If we stretch a helical spring or compress it along its axis then the restoring force, as well as the resulting elongation or compression, have the same direction. As such, when Fs and x are defined as vectors then Hooke’s equation will still remain valid and it will state that the force vector is the elongation vector multiplied by a fixed scalar.

The applications of Hooke’s Law is as given below:

The disadvantages of Hooke’s Law is as follows:

While we have learnt so much about Hooke’s Law, let us also understand the subsequent terms which can be used inside the mechanical properties of solids. Let us quickly go through them.

Stress: It is the resistance offered by the body to any deformation. Mathematically, it can be expressed as the restoring force per unit area.

Strain: Deformation per unit length in the direction of deformation is known as strain.

Plasticity: It is the belongings of material by which material does not regain its original dimension after the removal of deforming forces. This material goes in inelastic strain. In this case, permanent deformation occurs.

Elasticity: Elasticity is the property by virtue of which a material deformed under the influence of load but after the removal of the deforming load the object tends to recover its original dimension. If the body completely regains its original shape and size, then it is called a perfectly elastic body.

Brittleness: It implies that material cannot be drawn out in the form of wire. The failure takes place without any significant deformation

What property is described by Hooke’s Law?

What is the limitation of Hooke’s Law?

While Hooke’s law is applicable to any elastic object, it is not valid beyond the elastic limit of any material. Hooke’s Law only works within a limited frame of reference. No material can be compressed beyond a certain minimum size or stretched beyond a maximum size. There will be some permanent deformation or change of state. The law only applies so long as a limited amount of force or deformation is involved.

Why is Hooke’s Law sometimes negative?

The negative sign is customarily added in Hooke’s Law formula. This is done mainly to signify that the restoring force due to the spring is in the opposite direction to the force which caused the displacement earlier.