Have you ever wondered how a football player puts a goal bending the ball around a five-person wall? Well, the answer is Magnus’ Effect. Curving the ball in the air is not as easy as it looks. There are some physics concepts that make it possible. Magnus effect occurs on spinning objects that are spherical or cylindrical. The effect that we can observe is that the moving spinning object bends away from the intended direction of travel. The spin of the object alters the airflow around the body and by the conservation of momentum it causes the Magnus effect.

The effect is named after the German physicist Heinrich Gustav Magnus, who described the effect in 1852. Other scientists like Sir Issac Newton have explained this effect before Magnus, but it was Magnus who got honoured.

Does the Magnus Effect depend on Bernoulli’s Principle?

How does the Magnus Effect work? So, now you see that the movement of air around the ball is not symmetrical to the original direction of the ball. There is a net force exerted towards the direction shown by the arrow in the figure. Now Newton’s Third Law of motion comes into effect. Newton’s third law of motion states that every action has an equal and opposite reaction. 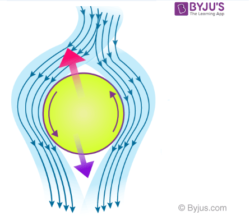 Just like how a rocket accelerates upwards when the gas is pushed downwards. In this case, the force depicted by the violet arrow in the figure causes a counter-force in the opposite direction depicted by the pink arrow. So, now there is a direction change caused on the ball. The process repeats itself to cause further turning of the ball as it moves ahead. 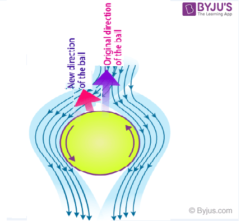