For students of the Science subject Chemistry, the term molecules would be one of the frequently used ones right from the day they start to learn the subject. An important aspect of molecules is the way their weight or mass are calculated in the form of molecular weight also referred to as molecular mass. The calculation for the same is done by taking the total of atomic mass for every individual atom contained and multiplying it by the number of atoms of the respective element in the molecular formula. In the absence of crystallographic data, modes based on scattering light and viscosity could be used to find the molecular weight mainly in the case of proteins as they are large molecules.

What Is Molecular Weight?

In simple words, the molecular weight is defined as the mass of a molecule or the mass of one mole of a substance.

How To Determine Molecular Weight?

There are various ways with which one could determine the weight of molecules which we will discuss below:

In this scenario, there would be the assessment of monoisotopic mass which would be the molecular weight of a tiny molecule viz. it would contain the most common isotope of every element.  You should notice that there would be some subtle differences from the molecular mass where the there would be definitions related to the isotope choices and hence the possibility of many a single specific molecular weight arises. The regular periodic table would not have the monoisotopic molecular weights and to calculate them they could be traced only on the isotopic masses table. As molecules with a lot of atoms least likely contain the highest abundant isotope of every element in an exclusive manner, larger molecules are the ones that mostly rely on average molecular mass. As isotopes are represented within the molecule owing to the statistical distribution of atoms, an average molecular weight (theoretical) could be computed relying on the relative atomic weight on the general periodic table.

This method is based on the Mark–Houwink relations, which state that volumetric proportion of dispersed particles present in a typical solvent is the dependent factor on which the intrinsic viscosity of solutions/ suspensions of macromolecules. To be specific, the particular molecular shape would be dependent on the conversion factor about the hydrodynamic size. Different range of techniques like that cater to the effects of hydrodynamics like SEC, DLS, DOSY, viscometry and diffusion would help to describe the molecular weight. The Molecular weight could thus be calculated using a range or series of macromolecule specific standards using the hydrodynamic size.

Introduction to Atomic and Molecular Weight 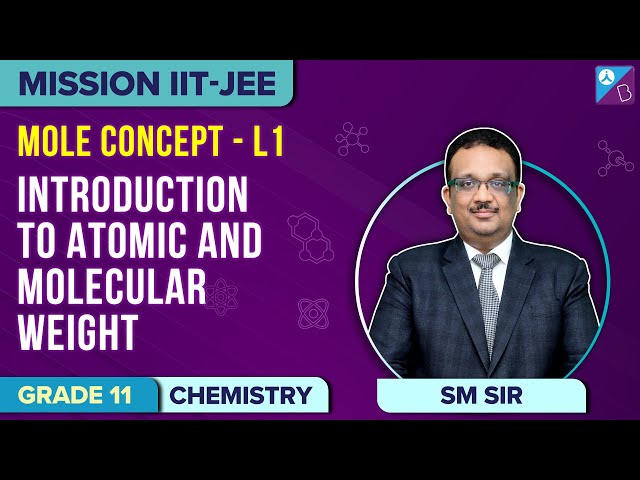 What is the molecular weight of an element?

How is molecular weight determined?

Does the Hydrodynamic method measure the weight of which molecules?

Yes, the Hydrodynamic method measures the weight of macromolecules.
Test your knowledge on Molecular Weight
Q5