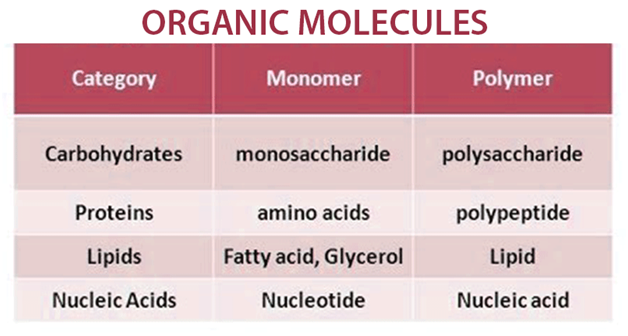 There was a logical fascination with chemistry which was notable to the living world as the science of chemistry was progressing. With every element learned that were found in living things, experts realized that carbon was stood to be the major component which is found in every kind of organism analysed along with extracted compounds.

Molecules containing carbon were assumed to point towards organisms and hence were called as organic molecules. Since we know about carbon’s ability to bond with four other atoms and form complex molecular structure which makes it a perfect candidate to build such organic molecules around.

Carbohydrates are the first class of organic molecules. The simplest kind of carbohydrate includes monosaccharide simple sugars which have a basic formula: two hydrogens and one oxygen for every carbon atom or one water for every carbon. Glucose is a common carbohydrate whose formula is C6H12O6. Sugars can be either a single sugar molecule to multiple molecules bound together.

Sugars can be anything from a single sugar molecule up to several bound together. When organic molecules are bound, a bonding site is freed at every member. This occurs by clipping a single hydrogen from one participant and a hydroxide (oxygen-hydrogen) off the other. Every bit is used to become a new bond and two free bits connect together as H2O. This process where water comes out is known as dehydration synthesis and applied whenever you build the molecule from components. When a chain of molecules needs to be broken apart like in digestion, an opposite reaction takes place wherein the bond breaks and one spot gets a hydrogen while the other receives hydroxide. A water molecule breaks apart in this process and called as hydrolysis.

There exist various uses of carbohydrates but structure and energy are the most common among living systems.

Lipids belong to the second class of organic molecules which includes oils and fats. These molecules have a simple with 3 carbon glycerol molecules. Every carbon picks a bit known as the fatty acid that can be long or short. A pair of terms shows the description of lipids as different types of molecules: a saturated molecule consists of contains all the atoms that can be held by its carbon; an unsaturated molecule consists of at least one double bond between carbons and therefore could one more hydrogen.

Lipid molecules are normally hydrophobic which means they do not dissolve in water. Vegetable oil is a lipid which makes it a handy barrier and not found in cell membranes.

Proteins are long chains of components known as amino acids consisting of layered structures. The first level is known as the primary structure which is the order of amino acids in every chain. The secondary structure, amino acids is a region that connects to each other and makes local forms like pleated coil sheets. At tertiary structure, the complete molecule is pulled into a 3-dimensional shape mainly through bonds but sometimes via covalent bonds.

Nucleic acids are of two types namely: ribonucleic acid and deoxyribonucleic acid. These polymers are lengthy chains of components known as the base of which there exist only five kinds. DNA is a spiral of two cross-connected strands.

Living beings are made by the code by name DNA which codes proteins which are the foundation of cellular chemistry. Nucleic acids, lipids, and carbohydrates are formed by systems driven by enzymes.