Tautomerism is a phenomenon where a single chemical compound tends to exist in two or more interconvertible structures that are different in terms of the relative position of one atomic nucleus which is generally the hydrogen. The two structures are called tautomers and these type of isomer compounds usually differ only in the number of electrons and protons. They also exist in dynamic equilibrium.

When a reaction occurs between these compounds there is only transfer of protons. Tautomerism is also termed as desmotropism.

Tautomerism basically happens in the presence of a catalyst.

If we consider the simple definition of tautomerism then it is described as a type of isomerism wherein the isomers interchange into or between one another very easily in order to exist together in equilibrium. During the reaction, there is proton transfer occurs in an intramolecular fashion. Consider an example of tautomerism given below,

Ketone-enol, enamine-imine,lactam-lactim, etc are some of the examples of tautomers

Meanwhile, some of the key features of tautomerism are that this process gives more stability for the compound. In this phenomenon, there is an exchange of a hydrogen atom between two other atoms while forming a covalent bond to either one. Tautomerism is a reversible process.

In the 1880’s a scientist named Emil Erlenmeyer developed rule for the tautomerism. He is one of the first one to have studied about the keto-enol tautomerism. This rule states that hydroxyl group in all alcohols is attached with double-bonded carbon atom directly, and forms ketones or aldehydes. This occurred due to the more stability of the keto form.

There are different types of tautomerism but among them, keto-enol tautomerism is the most important one. In this form, one structure is a ketone and the other is in enol form. Both of the tautomeric forms are interconvertible to each other by use of acid or base catalysts. This process of conversion of the ketone to enol is known as enolization.

It is a type of tautomerism that occurs due to the acid-base behaviour of the compound. Here two forms differ only in the position of a proton. This structure will have the same empirical formula and the number of charges.

In this tautomerism, there is a change in geometrical structure but no change for canonical resonance structure or mesomers.

Most of the non-carbonyl systems are available as a mixture of tautomers. Some of the examples are given below;

Tautomerism can have a huge impact on the chemical properties of the compound.

In symmetric form, there is only one form of tautomer. But for an unsymmetrical form, there can be two. Let’s have a look to the example given

This hydrogen atom is added parallelly to the anti-bonding pi-orbital of the carbonyl group. This bond will undergo hyperconjugation with the C-H bond and reduces the electron density at the alpha carbon atom, where the alpha hydrogen atom will become more acidic than before. If the position of alpha hydrogen is not so, the process of tautomerism will be very slow. Adamatanone is an example of this slow process.

In this process, we should follow Markovnikov’s rule for addition. Firstly, in the mechanism, there is a hydronium ion (H3O+) is present which is an electrophile, so the electrons exposed near the C=C bond will be donated. If the no. of hydrogen atom present in the compound is more, the addition of protons also increases.

The reaction mechanism is given below; 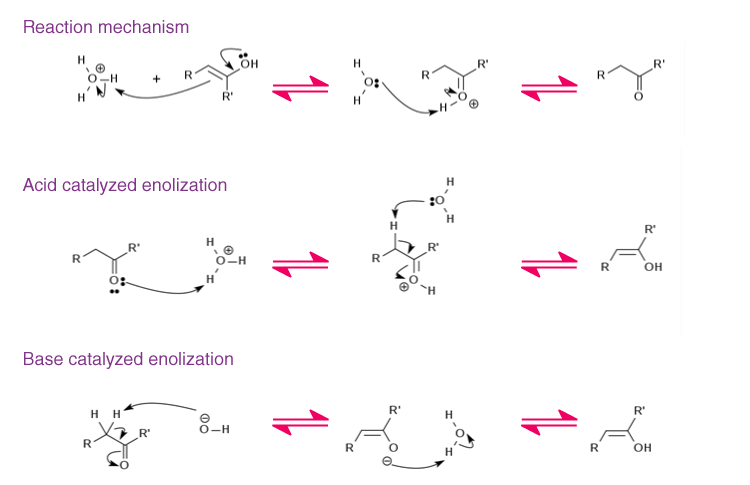