What are Alkyl Halides?

Alkyl halides also called haloalkanes or halogenoalkanes are chemical compounds that are often derived from alkanes that contain one or more halogens. We can also say that alkyl halides are a subset of the general class of halocarbons.

Alkyl halide or haloalkanes are formed by the replacement of hydrogen atoms in an aliphatic hydrocarbon by halogen atoms (Fluorine, chlorine, bromine or iodine). They can also be manufactured from any organic precursors such as alkanes, alkenes, or alcohols and carboxylic acids. Generally, alkyl halides contain hydrogen atoms attached to the sp3 hybridized carbon atom of alkyl groups.

Some examples of Alkyl halide include;

Alkyl Halide can be classified on the basis of various aspects. They are as follows.

Here, the classification mainly depends on whether they contain one, two, or more halogen atoms in their structure. Under this category we have;

The Position of Halogen atom Along the Chain of Carbon Atom

The classification depends on how the halogen atom is positioned on the chain of carbon atoms.

In this type of haloalkanes, the carbon which is bonded to the halogen family will be only attached to one other alkyl group. It doesn’t matter how much bulky group is attached to it.

Some examples of primary haloalkanes are,

In this type of haloalkanes, the carbon atom which is bonded with the halogen atom is joined directly to the other two alkyl groups which can be the same or different. Some examples are:

In this type of haloalkanes, the carbon atom which carries the halogen atom is directly bonded to three alkyl group. This alkyl group maybe with a combination of the same or different. Some examples are,

Alkyl halides are colourless when they exist in pure form. But, bromides and iodides develop colour when exposed to light. Many volatile halogen compounds have a sweet smell.

The chemical reaction of haloalkanes can be divided into three categories:

It is one of the most useful classes of organic reactions of an alkyl halide in which halogen is bonded to sp3 hybridized carbon.

Most organic chlorides, bromides and iodides react with certain metals to give compounds containing carbon-metal bonds. Such compounds are known as organometallic compounds. The product formed by the reaction of haloalkanes with magnesium metal in dry ether. 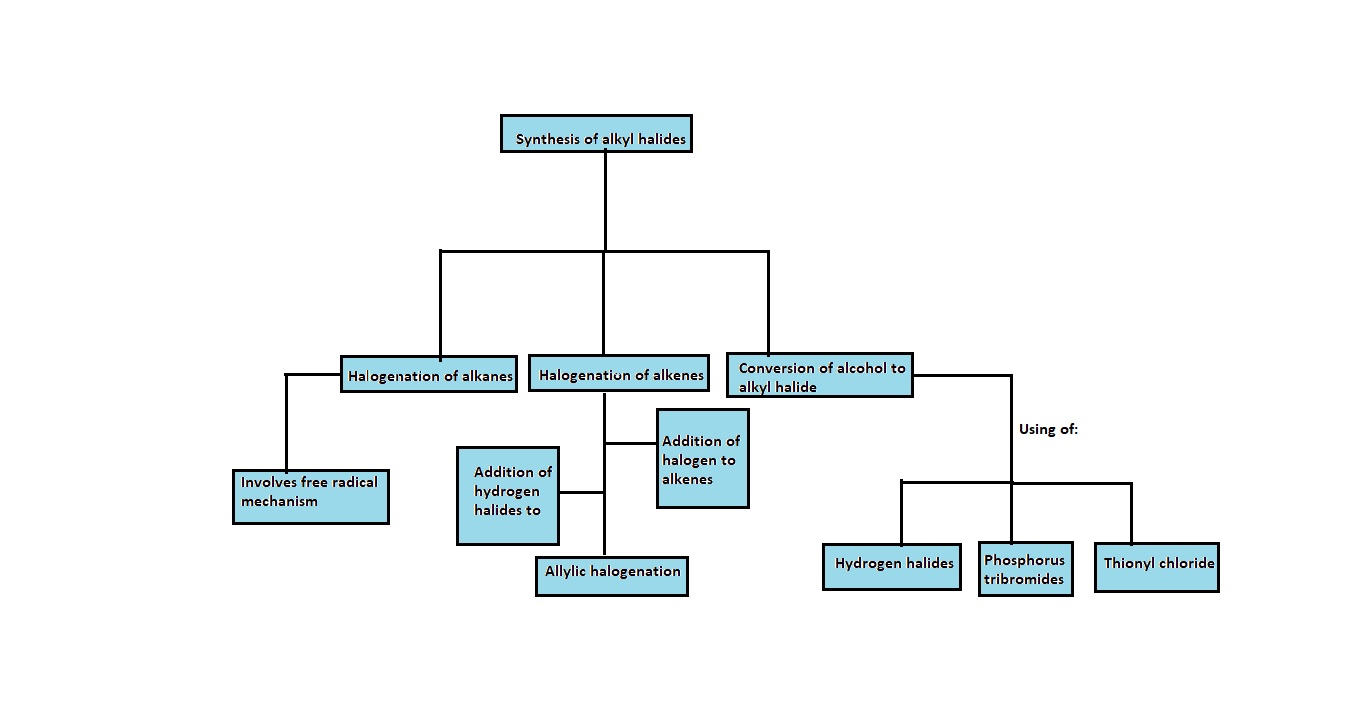