Alumina is also commonly known as aluminium oxide is a chemical compound primarily comprising of oxygen and aluminium molecules. It is a colourless crystalline substance that is found naturally in a variety of forms namely sapphire and ruby which is usually formed from corundum. The most common naturally occurring crystalline form of alumina or aluminium oxide is corundum. Interestingly, during special circumstances, corundum turns into sapphire and ruby gemstones.

Alumina is also extracted from ores such as bauxite which is found in topsoil in certain tropical and subtropical regions. Extraction and refining of alumina are done using the Bayer process. Here, the bauxite ore is crushed and dissolved in a sodium hydroxide solution. While keeping the temperatures high, the bauxite is then converted into sodium aluminate and the impurities such as slag also known as red mud or Fe2O3  is filtered. As the Bayer liquor is cooled, Al(OH)3 precipitates, leaving the silicates in solution.

Aluminium oxide particles are separated by the heating or calcination of Al(OH)3 at around 1100°C. When refined from bauxite, alumina has an appearance of a white powder just like table salt or granular sugar.

As stated above, the most common form of alumina or aluminium oxide is known as corundum, which is in a crystalline form. In this, the oxygen ions tend to form a hexagonal close-packed structure. Meanwhile, the aluminium ions fill two-thirds of the octahedral interstices. Each Al3+ centre is octahedral.

Alternatively, alumina also exists in several different metastable phases such as the cubic γ and η phases, the hexagonal χ phase, the orthorhombic κ phase, the monoclinic θ phase and the δ phase. Now, these can either be orthorhombic or tetragonal. Each phase will have a unique crystal structure and properties. 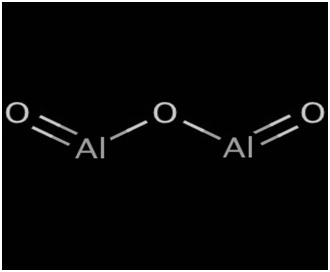 The reaction of alumina with sodium hydroxide results in the production of sodium aluminate (salt) and water. This reaction occurs at temperatures between 900-1100°C. Here, aluminium oxide acts as an acid.

Alumina reacts with heated dilute hydrochloric acid to produce aluminium chloride solution. In this case, alumina since it contains oxide ions it reacts with acids in the same way magnesium or sodium oxides do.

One of the properties of aluminium oxide is that it is an amphoteric oxide. What it means is that it can act both as acid and base. Interestingly, during its reaction with sulphuric acid alumina acts as a base. This is basically a form of a neutralization reaction.

What is alumina commonly known as?

What is the commonly occurring form of alumina?

The commonly occurring form of alumina is corundum.

From which ore is alumina extracted?

Alumina is extracted from an ore called bauxite.

Give one physical property of alumina.

What is the product of the reaction between alumina and sodium hydroxide?

Sodium aluminate and water are the products of the reaction between alumina and sodium hydroxide.
Test Your Knowledge On Alumina!
Q5