Amides are a kind of functional group that cannot be skipped as the presence of a nitrogen atom the compounds. Let us define Amide along with its formation, types and structure.

Functional groups provide the ability to identify and recognize a particular group of atoms which are part of a bigger compound. Functional groups range from alkanes to alcohols that include our special friend, amide. An amide is a functional group that consists of a carbonyl group and nitrogen atom and can be derived from the various functional group known as carboxylic acid.

When you visit an amide, you need to know a few points regarding nomenclature whether it’s a name or structure. Amides are classified into three types based on their names: primary amine, secondary amine and tertiary amine. The differences are classified based on the position of nitrogen atom linked to the carbon atom in a molecule chain. While naming a primary amide you need to drop the end with ‘ic acid’ or ‘oic acid’ followed by an ‘amide’.

The Secondary amide is named by integrating an N to show that nitrogen is linked to an alkyl group. An alkyl group is a kind of hydrocarbon chain that holds hydrogen and carbon atoms. 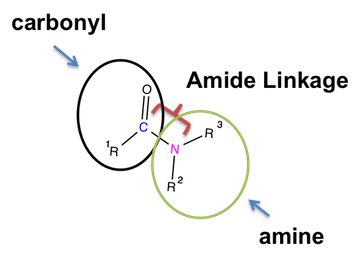 To remember an amide’s structure, all you need to know is a nitrogen atom should to be present in an amide compound.

Amides are prevalent in technology as structural substances. An amide relation is developed easily, resists hydrolysis and grants structural rigidity. Polyamides and nylons are the most resilient materials. Various drugs are amides that include penicillin, LSD and paracetamol. Moreover, plant N-alkylamides consist of a broad range of biological functionalities.

Test Your Knowledge On Amides!
Q5