There are various kinds of magnetism, out of which ferromagnetism is the strongest type. Ferromagnetic materials are those materials which exhibit a spontaneous net magnetization at the atomic level, even in the absence of an external magnetic field.

Ferromagnetism gets its name from the word ‘ferrous’ which means iron which was the first metal known to show attractive properties to magnetic fields. Ferromagnetism is a unique magnetic behaviour that is exhibited by certain materials such as iron, cobalt, alloys, etc. It is a phenomenon where these materials attain permanent magnetism or they acquire attractive powers. It is also described as a process where some of the electrically uncharged materials attract each other strongly. Ferromagnetism is a property that considers not only the chemical make-up of a material but it also takes into account the microstructure and the crystalline structure.

In a ferromagnetic material in the unmagnetized state, atomic dipoles in small regions called domains are aligned in the same direction. The domains exhibit a net magnetic moment even in the absence of an external magnetizing field.

Ferromagnetic materials are a certain group of substances that tend to manifest or display strong magnetism in the direction of the field due to the application of a magnetic field.  The cause of magnetism in these materials is mainly due to the alignment patterns of their constituent atoms. These atoms tend to behave as elementary electromagnets.

Magnetite is a ferromagnetic material which is formed by the oxidation of iron into an oxide. It has a Curie temperature of 580°C. Earlier, it was recognized as a magnetic substance. Magnetite has the greatest magnetism among all the natural minerals on earth.

The magnetization of the material measured in terms of magnetic flux density (B) when plotted against the external applied magnetic field intensity (H) will trace out a loop. This is called the hysteresis loop. 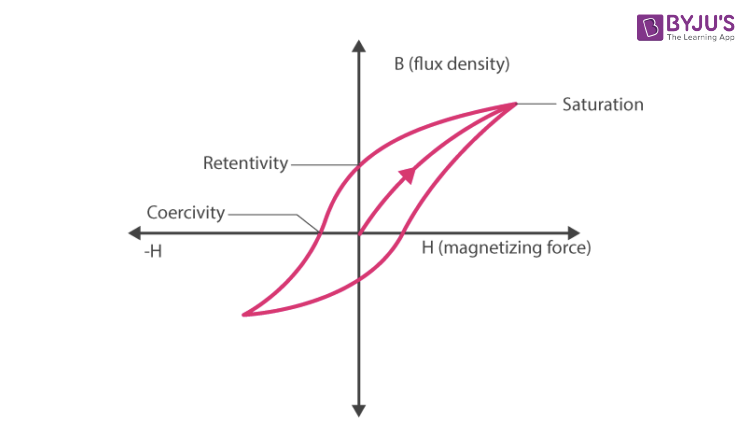 Retentivity is the magnetic flux density that remains when the magnetizing force is reduced to zero.

Coercivity is the strength of the reverse magnetizing field that must be applied to completely demagnetize the material.

There are wide applications of ferromagnetic materials in the industry. They are widely used in devices like an electric motor, generators, transformers, telephone, loudspeakers, magnetic stripe at the back of credit cards.

What are ferromagnetic materials? Give an example.

What is the difference between ferromagnetic and paramagnetic materials?

NaCl is not ferromagnetic, it is diamagnetic.