There are also enzymes that have been more or less isolated and are employed in biocatalysis or enzyme catalysis. With the help of modern biotechnology non-natural enzymes are also produced in labs today. With such developments, the modified enzymes are widely used to catalyze novel small molecule transformations that may be difficult to achieve using classical synthetic organic chemistry. When natural or modified enzymes are used to perform certain organic synthesis it is known as chemoenzymatic synthesis. The reactions that are performed using the enzyme are classified as chemoenzymatic reactions.

All in all, enzyme catalysts usually increase the rate of chemical reactions which further result in the conversion of substrate into a product. There are mainly two types of enzyme catalysts – activation enzymes and inhibitory enzymes. We will learn more about them in the following paragraphs.

In comparison to inorganic catalysts which include metals, acids and bases enzymes are very particular when it comes to reactions. A certain type of enzyme can react with only one particular compound or its substrate. As far as the mechanism is concerned, enzymes, when they act as catalysts, they tend to weaken the substrate bonds thereby lowering the overall activation energy. Reactions take place and the product is formed. A single enzyme molecule can be used repeatedly to transform several substrate molecules. Lets us also quickly go through some of the important characteristics of an enzyme catalyst below.

Enzymes are highly specific in nature. This specific nature is of the following types

(a) Group-specific: These enzymes will act on molecules having a specific functional group like amines, acids, etc. Enzymes are not only structural specific but also specific to the chemical groups surrounding them.

Example: Pepsin hydrolyses a peptide bond in which the amino group (NH2 group) is contributed by an aromatic amino acid such as phenylalanine, tryptophan.

(b) Linkage specific: In this type, the activity of the enzyme depends upon the linkage of enzyme molecules with functional groups.

(c) Bond specific: Enzymes are specific to the substrate having a similar bond and similar structure.

(d) Substrate specific: Enzyme specific for one substrate and one reaction.

Example: Maltase acts only on maltose.

(e) Optical specific: Enzymes are specific to the optical configuration of the substrate.

(f) Geometrical specific: Enzymes can act on a different substrate having the same molecular geometry.

Example: Alcohol dehydrogenase can oxidize both ethanol and methanol to give corresponding aldehydes.

High-temperature cause the deactivation of enzymes. So most enzymes function effectively at an optimum temperature of 25 – 35°C.

Certain substances increase enzyme activity to a very high or enormous rate. This activation exists as a molecule that is bound to an allosteric site of enzymes which “increase” the activation centre on the enzyme.

1. Hexokinase (I) acts as an activator to extract the glucose in the glycolysis pathway.

2. Glucokinase is an enzyme activator that combines with enzymes released by pancreatic cells used in the treatment of diabetes.

Sugarcane is sucrose (C12H22O11) basically it is a dextro rotator with a specific angle of rotation +62.5. In the process, enzyme invertase sucrose undergoes hydrolysis to give α – D(+) glucose and β – D(-) fructose as products. The solutes contain more leave rotatory fructose whose angle of the specific rotator is -92.2 hence this mixture is known as invert sugar and the process is the inversion of cane sugar.

This conversion of Dextro rotators sucrose to fructose is done by enzyme and block the attack of substrate these are known as competitive inhibitors.

pH is a very most important characteristic feature of biochemical reactions. Higher pH reactions generally deactivate the enzyme activity and lower pH media encourage the growth of microbes. So, optimum pH conditions are required for enzyme catalysis. Generally, pH from 7.2 to 7.4 is required for the enzymatic reactions.

Ethanol is obtained from glucose by the enzymatic action, Glucose is converted into ethyl alcohol and CO2 by the enzyme catalysis of zymase enzyme produced from yeast.

The above reaction belongs to enzyme catalysis.

Urea is an excretory chemical produced in the metabolic reactions of a living organism. It undergoes hydrolysis to give ammonia and CO2. Due to the offensive smell of NH3 public toilet are often with bad smell. This hydrolysis is catalysed by the enzymatic action of the urease enzyme.

When there is an increase in the rate of a chemical process by a biological molecule typically an enzyme, the process is known as enzyme catalysis. Such processes involve chemical reactions and the catalysis generally occurs at a localized site known as the active site.

The mechanisms of enzyme catalysis usually vary in different processes. However, they are quite similar in principle to other types of chemical catalysis. There is a reduction of energy barrier(s), therefore, separating the reactants from the products. With reduced activation energy the fraction of reactant molecules that can overcome this barrier increases and the product is formed.

An important factor that we need to consider is that enzymes can catalyze reactions in both directions but cannot take a reaction forward nor change the equilibrium position. The enzyme is not changed or consumed during the reaction and it can perform many catalyses repeatedly.

Meanwhile, the most common mechanism that explains the activity of enzymatic catalysis is the lock and key mechanism. 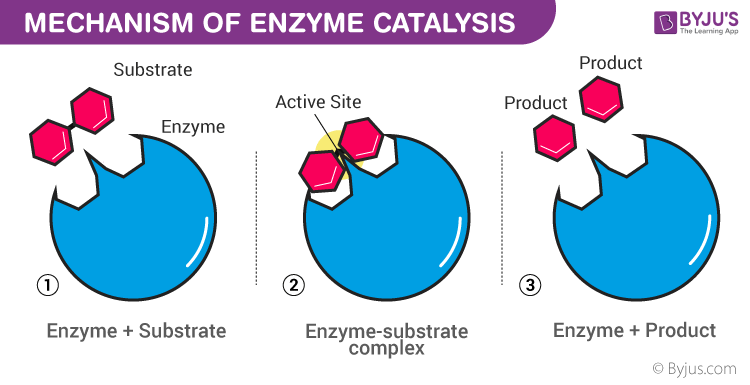 Chemoenzymatic Synthesis and its Advantages

We have already stated what is chemoenzymatic synthesis above. Below we will look at some of the advantages of this process.

1. What is the role of enzyme inhibitors in enzyme catalysis?

Enzyme inhibitors are mainly chemical substances, bacteria, and pathogens or pesticide molecules. These attack the activation site of the enzyme in two ways. Some molecules act as competitive inhibitors and other molecule attacks the allosteric site and stops the action of the enzyme decreasing its activity.

2. What are the optimum temperature and pH for the action of an enzyme?

At high-temperature enzymes are deactivated and their action is retarded. Similarly, at a very low temperature, they are activated. The optimum temperature required for the action of the enzyme is 25 – 55°C while the optimum pH for the enzymatic action is 7.2 – 7.4.

3. What are the common metal ions which act as enzyme activators?

Some transition metal ions such as Cu+2, Fe+2, Mn+2, Mo+2 act as a prosthetic factor of the enzymes. These increase the enzymatic catalysis and their activity.

4. What is the inversion of cane sugar?

In the catalytic action of the enzyme invertase, the highly dextrorotatory sucrose on hydrolysis gives a mixture of glucone and leaves rotating sucrose which is in more percentage in the mixture. This is known as the inversion of cane sugar mixture of α – D(+) glucose and fructose.

5. Why do public toilets give offensive bad odour?

The excretory material urea is hydrolysed to form Ammonia by the enzymatic action of urease and also due to interference of oxygen and moisture in the atmosphere which gives a bad odour.