What is Plaster of Paris?

Properties of Plaster of Paris

Some of the important properties of the Plaster of Paris are as follows:

Other Characteristics of Gypsum Plaster

Plaster of Paris is usually a white dry plaster powder. It can be effectively worked with metal apparatuses or even abrasive sheets and can be shaped as per the requirements. The strength of plaster of Paris is not as strong as other compounds and it often requires external support when a large amount is used. It is often applied in the form of a quick-setting paste with water

Types of Plaster of Paris

Let us look at some of the different types of Plaster of Paris.

Gypsum plaster mainly comprises white powder of calcium sulphate hemihydrate. This plaster is mostly produced by heating gypsum at 120–180 °C (248–356 °F). If the temperature goes beyond 392 degrees Fahrenheit, anhydrite is formed. The natural form of gypsum plaster is the mineral bassanite. However, when the dry plaster powder is mixed with water, it rehydrates back into gypsum.

Some of the uses of gypsum plaster are:

Clay plaster was used extensively during ancient times and in early Nineteenth-Century utopian villages. This is a mixture of clay, sand and water with the addition of plant fibres for tensile strength over wood lath. Clay plaster was used in making the interiors of the houses.

In order to prepare lime plaster, calcium carbonate or limestone is heated at temperatures above 850 °C (1600°F). This results in the production of quicklime (calcium oxide). We then add water to produce slaked lime (calcium hydroxide). Now, this is commonly sold as a wet putty or a white powder. Some more water can be added to form a paste that is stored in airtight containers. On exposure to air, calcium hydroxide turns back into calcium carbonate as it reacts with atmospheric carbon dioxide.

This form of plaster is used in building materials.  It is also used for frescoes or mural paintings.

It is a type of plaster that is used extensively for coating walls and chimney breasts. It is also used as a fire barrier in ceilings. Today these plasters are used as a replacement for conventional gypsum plasters to withstand very high temperatures.

How To Make Plaster of Paris

On heating gypsum at 373 – 393 K, it loses water molecules and becomes calcium sulphate hemihydrate. This product is known as the plaster of Paris. However, when water is mixed with dry plaster of Paris, it re-structures into gypsum. As for the process of hardening and setting, it starts around 10 minutes subsequent to blending and is completed in about 45 minutes. It is not completely set for 70-75  hours.

On the other hand, when plaster or gypsum is heated at temperatures higher than 266 °F (130 °C), then we obtain hemihydrate. Other compounds are also formed when gypsum is formed at different temperatures. For example; 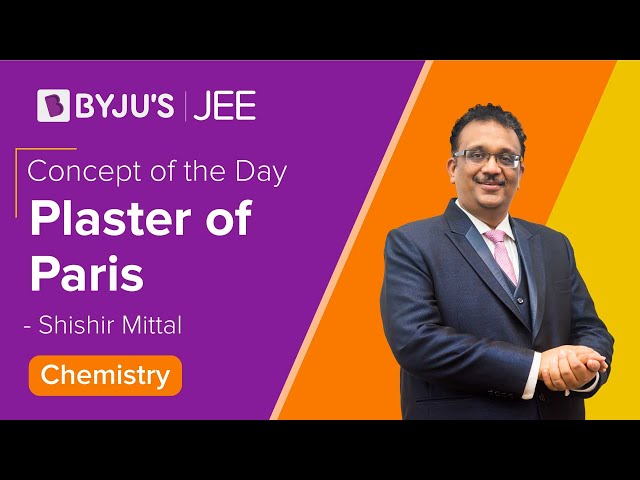 Usually, there are different categories of plaster of Paris and they have different applications. We will further look at some of the most common uses below.

In Architecture and Decorations

Plaster of Paris is utilized to make fine artwork for decoration and beautification of monuments and buildings. These might be geometric (imitating natural rocks and temples) or inspired by nature (like flowers or forests). These are also frequently used to imitate wood or stone mostly found in ancient buildings and monuments.

In the present day, this material is often utilized for false ceilings. In this, the powder of plaster of Paris is changed into a sheet structure and then these sheets are fixed to roofs.  It provides large scope for creativity in various structures containing different colours and light patterns. Extensive utilization of this plaster can be found in the construction sector.  The walls of the buildings are white-washed which (in certain nations) is only calcium carbonate. Subsequent to the application of a coating of the calcium carbonate, it turns white after drying and afterwards the walls are fit to for colours and paints.

The majority of the great classical wall painting works of art in Europe, similar to Michelangelo’s Sistine Chapel ceiling, are executed in fresco, which means they are painted on a fine layer of wet plaster, called intonaco; the colours sink into this layer in such a way that the plaster itself turns into the medium holding them, which results in the brilliant strength of fresco. Extra work might be included in a secco top of the dry plaster, however, this is commonly less tough.

Plaster (also called stucco in this situation) is a far simpler material for making reliefs than stone or wood and was generally utilized for the building wall reliefs in Egypt and the Near East.

Plaster is utilized by numerous morticians and executives of funeral houses to remake the damaged tissue, rejoin cut off parts of dead bodies, and fill wounds that occurred.

In the medical field,  Plaster of Paris is still frequently utilized a mould and casts. Plaster of Paris is generally utilized as a plaster to join broken bones; a bandage soaked with plaster is added to water and afterwards folded over the broken part of the body, setting into a protective and supportive coating, known as an orthopaedic cast.

Different kinds of moulds and prototypes are made with the help of plaster of Paris. Plaster of Paris is also utilized in radiotherapy for manufacturing individualized immobilization shells for patients. The bandages of plaster are utilized to develop an impression of a patient’s head and neck, and then the paste of plaster is utilized to fill the impression and produce a plaster dummy.

In dentistry, plaster is utilized for making a replica of oral tissues and teeth. Plaster is used to make wax false teeth. The wax is removed afterwards and filled with a mouldable dental base material. The regular acrylic dental replacement base replaces the plaster.

Moreover, false teeth (dentures) are made by first taking a dental impression utilizing a delicate, malleable material that can be expelled from around the teeth and gums with full replication and utilizing the impression to make a wax model of the teeth and gums. The model is utilized to make a plaster form (which is heated so the wax melts and streams out) and the dental replacement materials are infused into the shape. After some time, the mould is opened and the false teeth are finished.

Many fireproofing products and fire protection systems make use of plaster of Paris. The plaster coating discharges water vapours when the building catches fire and thus helping to retard the spread of the fire. It also gives some protection to slow down the heat circulation into steel and concrete components, that would lose their strength and breakdown in a fire.

Early forms of these plasters included asbestos strands but at this point have been prohibited in industrialized countries. Present-day plasters fall into different types such as fibrous, cement blend, and gypsum plasters.

Gypsum plaster is also used in 3D printing nowadays, where the water is specifically applied by the inkjet head.

What is the chemical composition of gypsum?

Gypsum is made of hydrated calcium sulfate. Its chemical formula is CaSO4.2H2O

How is gypsum different from plaster of paris?

How is the plaster of Paris formed?

What is the composition of lime plaster?

Lime Plaster is made of sand and calcium hydroxide.

What is the use of POP?

POP has many uses. One of the main uses is, it is used to make casts for statues and moulds. It is also used in ornamental casting.
Test Your Knowledge on Plaster of Paris
Q5