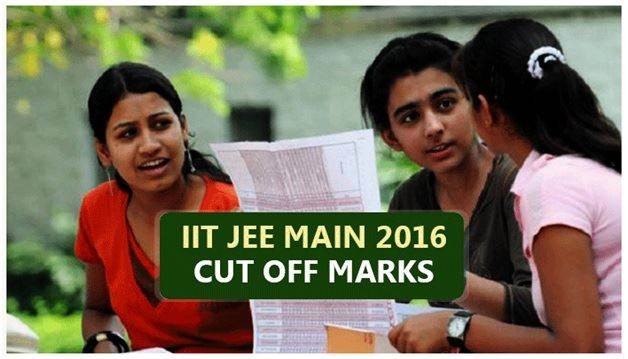 The JEE Main 2016 Cutoff will be declared by the Central Board of Secondary Education on April 27, 2016. The Cutoff of JEE Main is the minimum marks required to enter the second stage of JEE i.e. JEE Advanced 2016 which will be held on May 22 for admissions to prestigious colleges of the country like Indian Institute of Technology (IIT) and ISM Dhanbad. Only those candidates who score above the specified minimum cutoff are eligible to appear in JEE Advanced 2016.

The JEE Main cutoff for General category was 105 marks in 2015, and 115 in 2014. Candidates appearing for JEE Main 2016 can check the cutoff marks declared by CBSE. Only those candidates who clear JEE Main 2016 with the prescribed cutoff, will be shortlisted to appear for JEE Advanced 2016.

The cutoff is determined by:

Expected Cutoff helps candidates to form an estimate of their admission possibilities. Also, makes them relieve their anxiety.

Cutoffs are decided every year after analyzing various factors. However, since there is no significant change in the JEE exam pattern and evaluation, the JEE cutoff 2016 are expected to remain almost the same as JEE 2015 cutoff with a minor modification. The candidates need to score equal or more than the specified JEE Main Cutoff 2016 to qualify. Candidates may check the previous years’ JEE cutoff and expected JEE Main 2016 cut off from the above table.

As the name suggests, the cutoff score is the minimum score to qualify for JEE Advanced. The cutoff .is decided on various factors.

JEE Mains 2016 ranks won’t be declared as the final result but will be released after every round of admissions. Various colleges and courses have different cutoff marks and ranks for admissions.

Therefore, JEE Main 2016 Cutoff plays a crucial role regarding admissions to allied IIT (Indian Institute of Technology) and primarily aims at providing technical education on an equal basis to every interested candidate of the nation.

The Joint Seta Allocation Authority (JoSAA) is responsible for joint seat allocation. Moreover, it is one who provides details about the exam by helping the candidates who seek for information from various agencies. The JoSAA works under its own control and cost.