Voltmeter which is also known as voltage meter is an instrument that measures the voltage or potential difference among two points of an electronic or electrical circuit. Usually, the voltmeter is used for Alternating Current (AC) circuits or Direct Current (DC) circuits. Alternatively, Radio Frequency (RF) voltage can also be measured by specialized voltmeters.

A voltmeter also has high internal resistance. This is done mainly because it is used in measuring the potential difference between the two points of the circuit. As such the current of the measuring device remains the same. In other words, the high resistance of the voltmeter will impede the flow of current through it. This allows the device to take correct readings of the voltage.

The voltmeter is usually represented by the letter V that is placed inside a circle adjoining two terminals.

Today, a lot of the voltmeters are digital which given the readings as numerical displays. However, analogue forms are also available and this type of voltmeter gives readings wherein a pointer starts moving in some direction indicating voltage on a scale. Digital voltmeters are preferred because they generally have a higher order of accuracy than analogue voltmeters. We will discuss them in detail below.

An analogue voltmeter is used mainly for measuring the AC voltage. The reading is displayed with the help of a pointer that is fixed on the calibrated scale. The movement of the pointer is affected by the torque that is acting on it. The magnitude of the torque that is developed is directly proportional to the voltage being measured.

A galvanometer (current meter) that is sensitive and is part of a high resistance series is what makes a basic analogue voltmeter. The meter should have high internal resistance. Else the circuit operation during the test would be interrupted by drawing current significantly. The voltage range displayed by the meter is determined by the series resistance value and the galvanometer sensitivity. 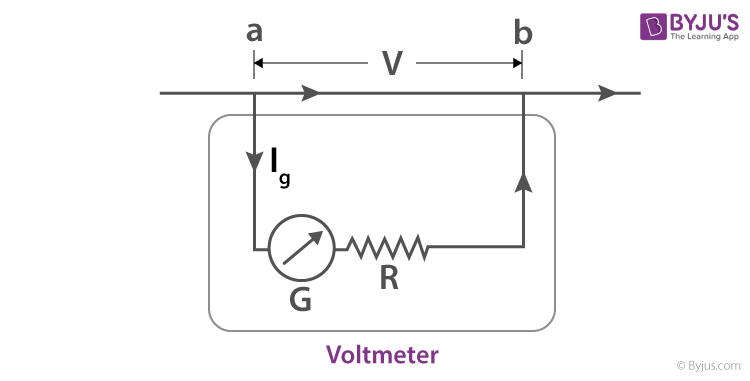 On the other hand, to measure low voltages an oscilloscope is often used where instantaneous voltage is depicted by the vertical displacement. RF and AC applications have their peak to peak and peak voltage measured by the oscilloscopes. Wiring, insulators and heavy-duty probes are crucial for making the meters for measuring high potential differences.

Another voltmeter that is quite used among voltage measurement instruments is the digital voltmeter. A digital voltmeter (DVM) measures an unknown input voltage by converting the voltage to a digital value and then displays the voltage in numeric form. DVMs are usually designed around a special type of analogue-to-digital converter called an integrating converter.

There are different factors that have an impact on the accuracy of the DVM like input impedance, temperature, and power supply voltage variations of the DVM. Around 10 MΩ is the input resistance of DVMs that are the least expensive. The input resistances for precision DVMs of 1 GΩ or higher for ranges of low voltages (below 20 V). The DVM must be periodically calibrated with a voltage standard like the Weston Cell as a way to ensure that the manufacturer’s specified tolerances.

These are voltmeters based on their construction.

As described above, voltmeters are made in different styles. Moreover, some portable ones are separately powered with the help of a battery whereas others are powered by the measured voltage source. In any case, these are usually designed to measure current or resistance and are often used as standard test instruments in electrical work environments.

What is a voltmeter?

A voltmeter is a device that measures voltages of direct current or alternating current on a scale commonly in volts, millivolts, or kilovolts. Many voltmeters are digital that give readings as numerical displays.

How is a voltmeter is connected to a circuit?

The voltmeter is always connected in parallel across the circuit.

What is the working principle of a voltmeter?

The basic principle of a voltmeter is that it must be connected in parallel to the circuit in which the voltage has to be measured. A parallel connection is used because a voltmeter is built in such a way that it has a very high resistance value.

Test your Knowledge on Voltmeter
Q5